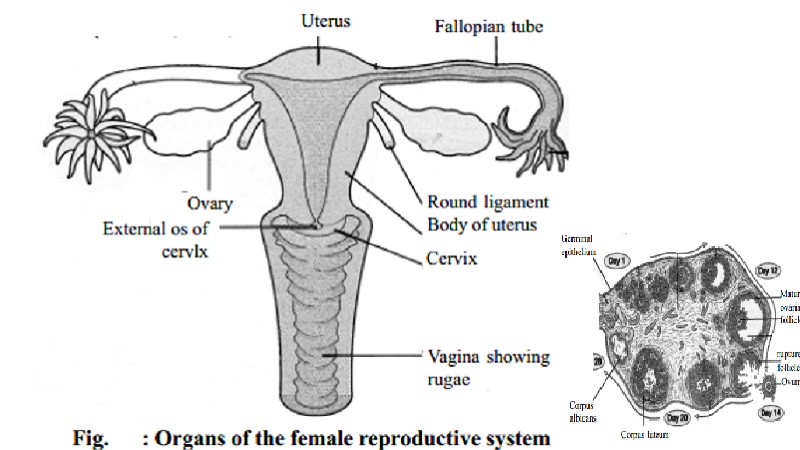 The gonads of the female are called ovaries and the cells that they produce are known as ova or egg-cells. Each female has a pair of oval-shaped structure, about the size of an almond. Each ovary measures 3.5 x 2.5 x 11.5 cms and weighs about 8-10 gms. They are situated at the back of the abdominal cavity at the hip level.

The Reproductive System consists of those organs whose function is to produce a new individual.

The sex organs in the male and female can be divided as:

Secondary (or accessory) sex organs, i.e. those concerned with carriage of gamete and other functions.

Accessory Sex Organs in the Male

Accessory Sex Organs in the Female

The gonads of the female are called ovaries and the cells that they produce are known as ova or egg-cells. Each female has a pair of oval-shaped structure, about the size of an almond. Each ovary measures 3.5 x 2.5 x 11.5 cms and weighs about 8-10 gms. They are situated at the back of the abdominal cavity at the hip level. An ovary consists of the following:

The Germinal Epithelium: It is the outer part of the ovaries from which the primitive graafian follicles develop. :

Tunica Albugina: This is made up of connective tissues found under the germinal epithelium.

Stroma: It is a connective tissue network continuous with Tunica albugina and containing involuntary muscle fibres. It supports the ovarian tissues and carries blood vessels, lymphatics and nerves.

Graafian Follicles : These, are small islands of cells found at the peripheral part of the ovary. The female gametes called ova are produced in the graafian follicles. When an ovum matures, the follicle in which it develops bursts. The follicle usually takes 10-14 days. This process of rupture of graafian follicle is called the 'ovulation'. Female gamete (ovum) produced, during ovulation is secreted.

Interstitial Cells: These are polyhedral cells found in between follicles. These cells secrete oestrogen. 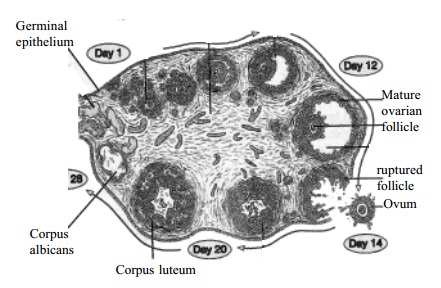 Produce ova and expel one at approximately 28 days interval during the reproductive life.

Close to each ovary there is a narrow tube about 10 cm long with an open end which looks like a fringe of petals. These tubes are called the fallopian tubes. These are attached to the uterus at its upper outer angles.

These tubes act as ducts for the female gametes although they are not connected to the ovaries. Fertilization of the male and female gametes normally occurs in the tubes.

The uterus plays an important role in maintaining growth and development of the embryo. The ovum is discharged from the ovary. It is then transported to the uterus through the fallopian tubes. The fertilized ovum is embedded in the endometrium of the uterus. Placenta is then formed from the embryonic and endometrium tissues. This maintains the nutrition, respiration and excretion of embryo until parturition.

It is a muscular membranous tube situated between the rectum and the urethra.

It is estimated that, at birth, there are about 30000 ova or eggs in a female child. No fresh ova are formed after birth but during the reproductive female life that is commencing between 10 and 16 years of age and concluding between 45 and 55 years of age, these Ova develop within the follicles or sacs in which they are embedded. They come progressively nearer to the surface of the ovary where they mature and increase in size. About every 28 days one of these follicles burst open from the ovum together with the fluid surrounding it, and is expelled into the fallopian tubes; into uterus where it may or may not be fertilized. If the ovum is fertilised by a male reproductive cell or spermatozoa it then attaches itself to the uterine wall and develops there. If the ovum does not become fertilised within a few days, it is cast off and the process termed menstruation is initiated.