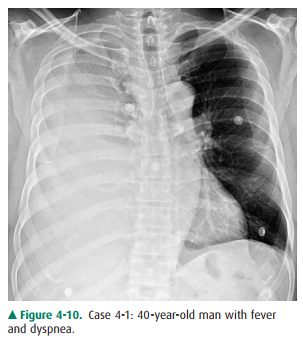 B.   total atelectasis of the right lung.

D.   aplasia of the right lung. 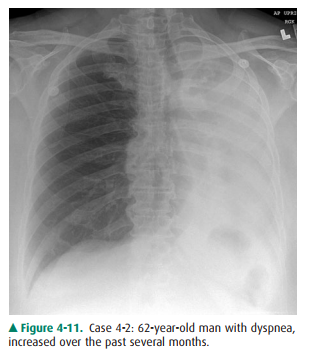 4-1. In this case, a frontal chest radiograph (Figure 4-10) shows that the right hemithorax is opaque. Signs of mass effect are present and suggest a space-occupying lesion in the right hemithorax. There is shift of the mediastinum toward the contralateral hemithorax, as evidenced by shift of the trachea and left heart border to the left. If a nasogastric tube were in place, esophageal shift could be inferred from the shift of the nasogastric tube. Space-occupying lesions also cause inferior displacement of the hemidiaphragm. Although the diaphragm itself is not visible, when the process is on the left, one can infer that the di-aphragm is depressed by the inferior displacement of the gastric air bubble. Mass effect may also widen the distance between ribs. In this patient, the space-occupying lesion was a large right pleural effusion resulting from tuberculous empyema. A chest CT scan (Figure 4-12) in this patient shows the large pleural effusion and complete collapse of the underlying right lung against the medial aspect of the right hemithorax (A is the correct answer to Question 4-1).

4-2. In this case, a frontal chest radiograph (Figure 4-11) shows that the left hemithorax is opaque. In con-trast to the patient in Figure 4-10, the patient in Figure 4-11 has signs of volume loss within the left hemithorax. There is mediastinal shift toward the ipsilateral hemithorax, as evidenced by shift of the trachea and the right heart border into the left hemithorax. The gastric air bubble is higher in the left upper quadrant of the abdomen than is nor-mally seen, because of elevation of the left hemidi-aphragm. The mediastinal window of the chest CT examination (Figure 4-13A) shows the mediastinal shift to the left and consolidation of the left lung. The lung window of the chest CT examination (Figure 4-13B) shows that the right lung is aerated. In this patient, the left lung collapse is due to a bronchogenic carcinoma in the left main bronchus (asterisk). This case exhibits the signs of volume loss, as opposed to mass effect (B is the correct answer to Question 4-2).

This exercise reviews the principal signs that allow one to distinguish mass effect from volume loss. The mass effect caused by a tumor or by a large pleural effusion expands the hemithorax and displaces the trachea, mediastinum, and diaphragm away from the mass. There may be a subtle in-crease in the distance between ribs. Volume loss, on the other hand, decreases the size of the hemithorax, and the trachea, mediastinum, and diaphragm move toward the involved hemithorax. The distance between the ribs on the abnormal side will be slightly decreased. In Figure 4-10, the opacifica-tion of the right hemithorax occurs as a result of massive right pleural effusion, and the right lung is collapsed as a re-sult of both compression by the fluid present within the right pleural space and a loss of the negative intrapleural pressure that keeps the lung in close juxtaposition to the chest wall. In Figure 4-11, the collapse is due to obstruction of the left main bronchus, resulting in atelectasis (airless-ness) of the left lung. 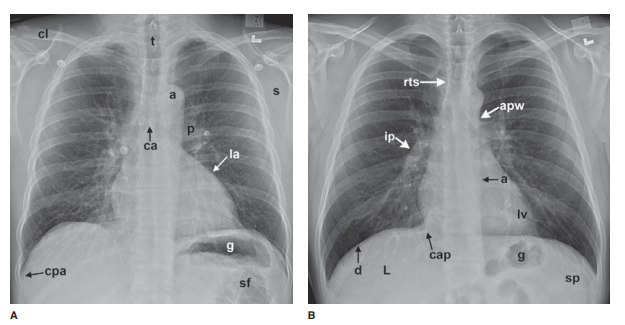 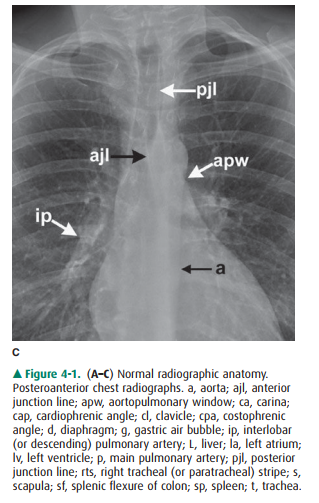