4-22. The most likely cause for this patient’s dyspnea and pleuritic chest pain (Figure 4-68 A–D) is 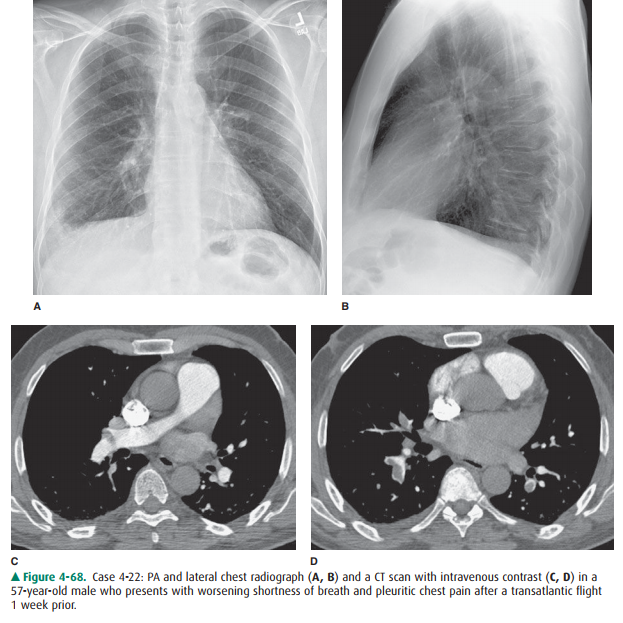 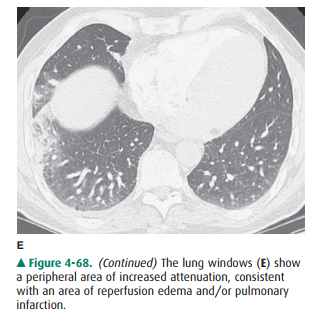 4-22. The chest x-ray shows a wedge-shaped opacity in the periphery of the right lung base. There is blunting of the right lateral costophrenic angle on the PA view of the chest. The opacity could represent a Hampton’s hump in the clinical setting of pulmonary embolus. Alternatively, pneumonia could have a similar presen-tation. The CT scan demonstrates filling defects within the pulmonary arteries bilaterally. At the levels shown, thromboemboli are visible within the right main pul-monary artery extending into the right upper lobe pul-monary artery (Figure 4-68 C) and within the basilar segmental arteries bilaterally (Figure 4-68 D). (C is the correct answer to Question 4-22.) The lung windows (Figure 4-68 E) show a peripheral area of increased at-tenuation, consistent with an area of reperfusion edema and/or pulmonary infarction.

Pulmonary thromboembolism can occur as a result of deep venous thrombosis, typically from the veins of the pelvis and lower extremities. These thrombi dislodge (em-bolize) and travel via the inferior vena cava and right heart chambers to become trapped in the tapering branches of the pulmonary arterial system. Because pulmonary em-bolism often occurs without pulmonary infarction, the ap-pearance of the chest radiograph is usually normal. The areas of lung deprived of pulmonary arterial flow are per-fused by bronchial arterial collateral vessels. The chest ra-diograph may demonstrate subtle signs of volume loss or a small pleural effusion. Pulmonary opacities develop be-cause of microatelectasis within the region of lung that has had an embolus, from edema as the blood flow is restored via the bronchial circulation, or from hemorrhage within a pulmonary infarction. Pulmonary infarction may occur if the pulmonary venous pressure is elevated or the bronchial arterial supply to a region is deficient for some reason. The cone-shaped area of pulmonary infarction has been called a Hampton’s hump (Figure 4-68 A) and is named after the person who originally described it. An area of radiolucency, corresponding to diminished pul-monary vascularity distal to a pulmonary embolism, is oc-casionally seen and is called the Westermark sign. There may also be an increase in the size of the pulmonary artery proximal to a large central pulmonary embolus (Fleischner sign).

Two imaging modalities are widely used in the evalua-tion of a patient with suspected pulmonary embolism: radionuclide perfusion scan and chest CTA. The radionu-clide perfusion scan may be the more appropriate exami-nation in the patient with a normal chest radiograph and no preexisting cardiac or pulmonary disease. In the pa-tient with an abnormal chest radiograph, or preexisting cardiopulmonary disease, the V/Q scan is more likely to be interpreted as “indeterminate” and a chest CT becomes the preferred imaging modality. The chest CT also has the ad-vantage of demonstrating unsuspected abnormalities, such as pericardial effusion, emphysema, esophagitis, or aortic dissection, which could be responsible for the patient’s chest pain or dyspnea.

On chest CTA, thromboemboli are visible as filling defects within the contrast-filled pulmonary arteries. These are typi-cally several centimeters long and often are seen draped across the bifurcation of an artery (saddle emboli) (Figure 4-69). In patients with acute pulmonary embolism, the filling defects are seen within the center of the arterial lumen, al-though they may also completely occlude the artery. In pa-tients with chronic pulmonary embolism, the filling defects are more likely to be found against the wall of the artery. Cal-cification within the thrombus also confirms the chronic na-ture of the thrombus.

There will be some patients in whom the diagnosis of pul-monary embolism remains uncertain after either a V/Q scan or a chest CTA. These examinations can be inadequate for a number of both technical and clinical reasons. The chest CTA can be difficult to interpret unless the patient is able to sus-pend respiration for the duration of the scan. Fortunately, helical CT scans are able to scan the entire thorax in under 20 seconds. Many patients with severe dyspnea, however, are unable to achieve this. Pulmonary angiography can be ob-tained to further evaluate the pulmonary arterial circulation when either the V/Q scan or chest CTA is nondiagnostic.