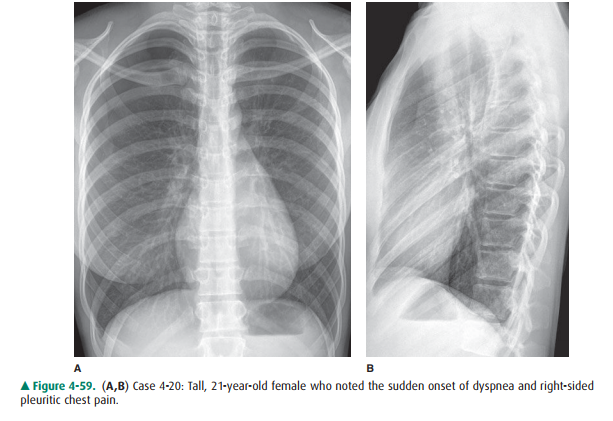 B.   overinflation associated with asthma.

D.   normal chest, with a skin fold projected over the right hemithorax.

4-10. In Figure 4-59, there is increased radiolucency in the periphery of the right hemithorax. On the close-up of the right lung (Figure 4-60 A), there is a thin white line (arrows) paralleling, but displaced from, the right lateral chest wall. The thin line represents the visceral pleura. There is air-filled lung medial to this thin white line, and there is air within the pleural space lateral to this line. Note the absence of pul-monary vessels lateral to the pleural line (C is the cor-rect answer to Question 4-20). 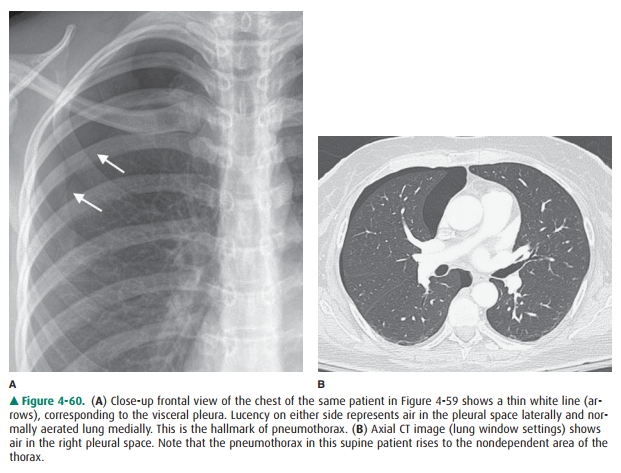 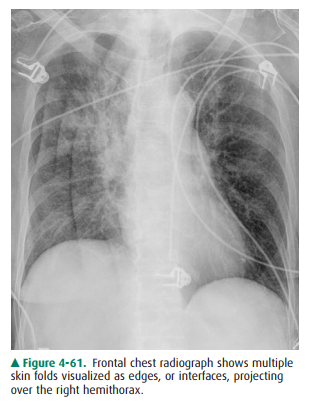 The most common mimic of a pneumothorax, particu-larly in a supine patient, is a skin fold. The image receptor for portable AP chest radiographs is placed behind the pa-tient’s back. Skin folds may be pressed between the pa-tient’s back and the receptor. Radiographically, a skin fold produces an interface, or an edge of thick tissue outlined by the greater radiolucency of the superimposed lung (Figure 4-61). If you can distinguish an edge from a line, then you can distinguish a skin fold from a pneumothorax. The ab-sence of pulmonary markings beyond the pleural line is supporting evidence for a pneumothorax. Because the vessels taper as they approach the lung periphery, the ves-sels in the extreme periphery of the lung may be too tiny to see.