4-3. In Figure 4-14 A,B, the inferior margin of the opacity in the right upper thorax is due to 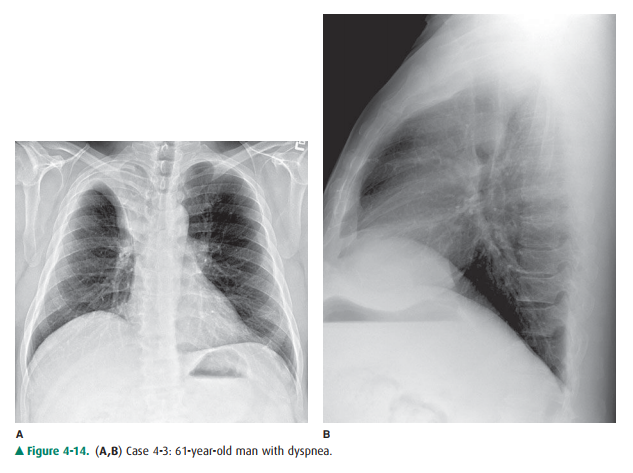 4-4. In Figure 4-15 A,B, which of the following is true re-garding right middle lobe collapse?

A.   A triangular opacity is superimposed on the heart on the frontal radiograph.

B.   The right heart border is obscured.

D.   The right heart border is shifted to the left.

4-5. In Figure 4-16 A,B, a sign of left lower lobe collapse in this patient is which of the following? 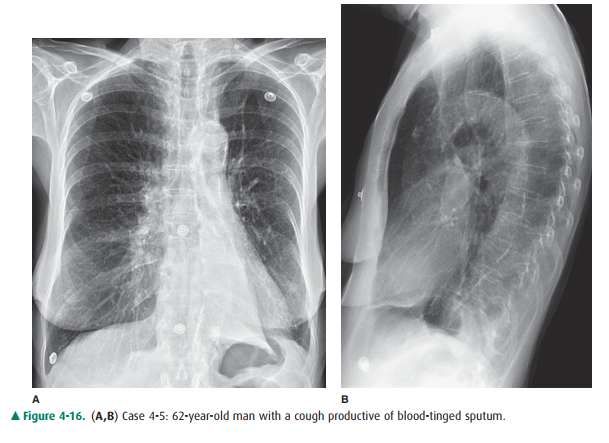 A.         Obscuration of the lateral wall of the ascending thoracic aorta

B.         Superior displacement of the left hilum

C.         Obliteration of the anterior aspect of the left hemidiaphragm on the lateral view

D.         Triangular opacity in the left retrocardiac area on the frontal view

E.         Shift of the major fissure toward the anterior chest wall on the lateral view

4-6. In Figure 4-17 A,B, signs of left upper lobe collapse seen in this patient include which of the following? 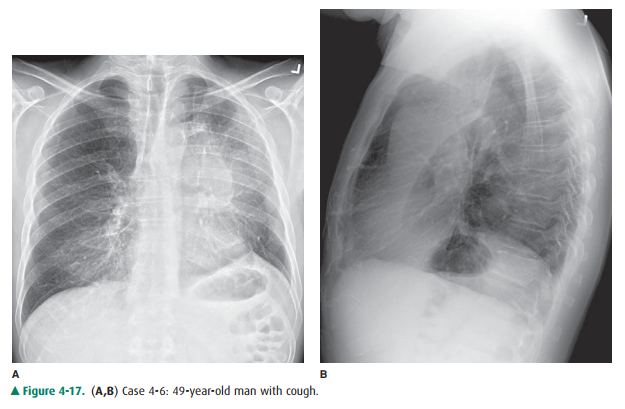 A.         Crescent of air around the transverse section of the aortic arch resulting from hyperexpansion of the superior segment of the left lower lobe

B.         Posterior displacement of the left major fissure on the lateral view

4-3. In Figure 4-14, there is opacity in the right upper lung that is sharply marginated on its inferior border. Vol-ume loss is evidenced by the slight displacement of the trachea into the right hemithorax, the position of the right heart border further to the right of the thoracic spine than normal, and the slight elevation of the right hemidiaphragm, which is normally 1 to 1.5 cm higher than the left hemithorax. The pulmonary vessels of the right hilum are obscured by opacity in the right upper thorax. The configuration of the inferior margin of the opacity is that of a reverse S or S on its side. The “S-sign of Golden” describes the appearance of the minor fis-sure in right upper lobe collapse, which is due to bron-chogenic carcinoma. In this case, bulky right hilar lymph-node enlargement has caused extrinsic com-pression of the right upper lobe bronchus and has re-sulted in right upper lobe collapse. The right hilar mass tethers the medial aspect of the minor fissure toits normal midthoracic position, whereas the lateral aspect of the minor fissure moves freely and collapses superiorly. In patients in whom the minor fissure is in-complete, collateral air drift across the canals of Lam-bert and the pores of Kohn may allow a lobe to remain aerated despite complete obstruction of its bronchus. In Figure 4-14 A, hyperexpansion of the superior seg-ment of the right lower lobe produces the ovoid lu-cency on the medial aspect of the collapsed right upper lobe. On the lateral radiograph, a V-shaped opacity is seen at the lung apex. A mass-like opacity is superim-posed on the suprahilar area, corresponding to a com-bination of tumor and atelectatic lung (B is the correct answer to Question 4-3). In patients with right upper lobe collapse without a hilar mass, the fissure is able to rotate in a straighter line and does not result in the re-verse S sign. The major fissure is oriented in a coronal plane and is not normally visualized on the frontal chest radiograph. Therefore, the major fissure would not account for the opacity seen on the frontal chest radiograph, either with or without a hilar mass.

4-4. In Figure 4-15 A,B, the right heart border is obscuredby adjacent opacity on the PA radiograph. The lungs are hyperinflated. The heart is in the midthorax in approximately its normal position. The heart border has not been displaced to the left. On the lateral radiograph, a narrow triangular opacity is superimposed on the heart. The apex of the triangle points toward the hilum, and the base of the triangle is against the anterior chest wall. This is a collapsed right middle lobe. The right hemidiaphragm is slightly elevated, but there are no other signs of significant volume loss. Right middle lobe collapse may have minimal impact on the overall volume in the right hemithorax because it is the smallest of the pulmonary lobes, and the upper and lower lobes can expand to compensate for its volume loss. Right middle lobe collapse, unlike other lobar collapse, is often due to benign causes, such as extrinsic pressure by enlarged lymph nodes, which totally surround the bronchus. This enlarge ment is most frequently due to granulomatous disease of an infectious or noninfectious nature (B is the correct answer to Question 4-4). 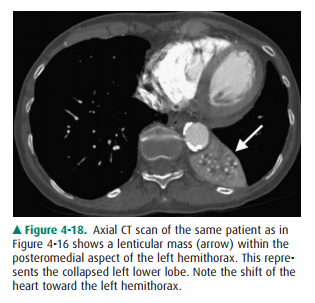 4-5. When the left lower lobe collapses, the result is a triangular opacity, which can be quite subtle, behind the heart. Secondary signs of volume loss, however, should prompt one to look closely for the collapse. These signs include shift of the trachea and heart to the left (note that the right heart border is now superimposed on the thoracic spine), inferior displacement of the left hilum,and elevation of the left hemidiaphragm. On the lateral radiograph, the right hemidiaphragm is visible along its entire contour. However, the left hemidiaphragm is obscured posteriorly because it is “silhouetted” by the collapsed left lower lobe. Because it is tethered medially by the inferior pulmonary ligament, the left lower lobe collapses posteriorly and medially (Figure 4-18). The major fissure is displaced posteriorly, as well as rotated into a more sagittal orientation than the normal coronal orientation (D is the correct answer to Question 4-5). You may have noted the large lung volumes in this patient, which are due to centrilobular emphysema. In this patient, who has a long history of cigarette smoking, a squamous-cell carcinoma in the left lower lobe bronchus was responsible for the collapsed left lower lobe. he primary sign of volume loss in Figure 4-17 B is anterior displacement of the left major fissure on the lateral  radiograph.he  collapsed  left  upper  lobe  is opaque as a result of both airlessness and postobstructive pneumonitis. When there is little neumonitiswithin the obstructed lobe, the left upper lobe can collapse completely behind the anterior chest wall, so that only a narrow band of opacity is visible behind the sternum. In this situation, the diagnosis may be suggested by the secondary signs of volume loss. Note the shift of the trachea to the left and the slight elevation of the left hemidiaphragm. The left lower lobe is hyperexpanded.The hyperexpanded superior segment of the left lower lobe produces a crescent of air around the transverse section of the aortic arch on the PA radiograph. A thin opaque line is visible at the apex of the left hemidi-aphragm on the PA radiograph. Presence of this line, called a juxtaphrenic peak, should prompt one to look for upper lobe collapse. The hilum may be displaced anteriorly in left upper lobe collapse, but it is never dis-placed inferiorly. Option E, inferior displacement of the left hilum, is therefore false (A is the correct answer to Question 4-6). Because the lingular bronchus arises from the left upper lobe bronchus, the lingular seg-ment of the left upper lobe is collapsed as well in this patient. The lingula is adjacent to the left heart border and is responsible for the obscuration of the left heart border in left upper lobe collapse.

The term atelectasis refers to volume loss, or airlessness, within the lung. The term collapse is often used to describe complete atelectasis of an entire lobe or an entire lung. Atelectasis can occur as a result of several pathophysiologic processes. Ob-struction of a bronchus by bronchogenic carcinoma should al-ways be considered in an adult with lobar atelectasis. The tumor may be within the bronchus (endobronchial), as occurs with squamous-cell carcinoma or small-cell undifferentiated carcinoma. The tumor may be outside the bronchus, and en-larged lymph nodes may cause extrinsic compression of the bronchus. In a child, aspiration of a foreign body is a more likely cause of obstruction of a bronchus. Complete obstruc-tion of a lobar bronchus may not always result in lobar collapse because pathways of collateral ventilation are present within the lung. The pores of Kohn and the canals of Lambert allow collateral air drift between adjacent areas of lung but do not ex-tend across pleural surfaces. The visceral pleural surface that covers the lung creates the interlobar fissures (minor fissure, major fissure) that separate lobes of the lungs. These fissures are not always complete, however, and may not extend entirely across the lung. When the right upper lobe bronchus is oc-cluded, for example, the right upper lobe may remain partially aerated as a result of collateral air drift from the right middle lobe, around an incomplete minor fissure. Obstruction of smaller airways can occur as a result of mucous plugs, which are often present in intubated patients and in patients with chronic small airway disease. 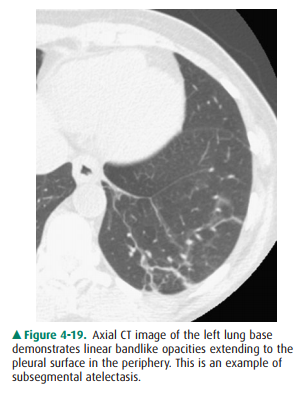 It is helpful to remember the normal positions of the hemidiaphragms, trachea, mediastinum, and hila so that displacement of these structures can be readily noted. In most patients, the left hilum appears slightly higher than the right, because the left hilar opacity is predominantly due to the left pulmonary artery arching over the left main bronchus. The right hemidiaphragm is usually 1.0 to 1.5 cm higher than the left hemidiaphragm. The trachea should be in the midline, and the spinous processes of the upper tho-racic vertebrae should be superimposed on the center of the tracheal air column. The right heart border normally lies just to the right of the thoracic spine. Subtle signs of volume loss may be more readily appreciated by compari-son of the patient’s radiograph with baseline radiographs taken previously.