4-9. Which of the following best describes the chest radi-ograph in Figure 4-24? 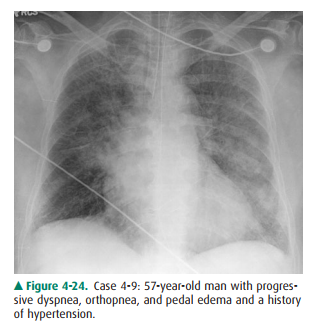 D.   Oligemia in the right lung

4-9. Frontal chest radiograph (Figure 4-24) shows mild enlargement of the heart and indistinct vascularity, particularly at the lower lungs. Interlobular septallines are visible adjacent to both lower costophrenic angles. (B is the correct answer to Question 4-9)

Pulmonary edema can be divided into two major categories: cardiogenic edema and noncardiogenic edema. Cardiogenic edema occurs as a result of elevation of pulmonary capillary pressure, which is usually due to pulmonary venous hyper-tension. Noncardiogenic edema occurs as a result of disor-ders that increase pulmonary capillary permeability. With both types of edema, there is a net movement of fluid out of the microvasculature and into the pulmonary interstitium and alveoli. The most common cause of pulmonary edema is left ventricular failure, which may be due to atherosclerotic coronary artery disease, mitral or aortic valvular disease, my-ocarditis, or cardiomyopathy. Cardiogenic edema is preceded by pulmonary venous hypertension, which is associated with redistribution of pulmonary blood flow from dependent re-gions of the lung to nondependent regions. In the erect patient, the radiographic sign of this redistribution is an increase in size of vessels in the upper lungs and a decrease in the caliber of pulmonary vessels in the lung bases. Radiographically, it is often difficult to distinguish pulmonary arteries from pul-monary veins, but for purposes of determination of flow redis-tribution, the distinction is ignored and multiple vessels are measured at equal distances from the hilum or chest wall. 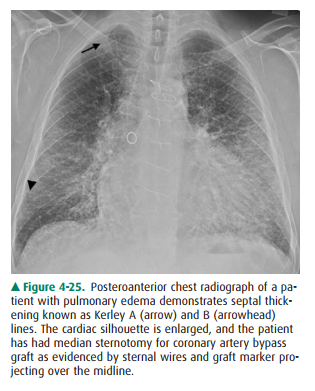 When seen end-on, normal bronchoarterial bundles may appear as adjacent circles of equal diameter, with the artery opaque and the bronchus lucent. The pulmonary arteries andbronchi are located together in the same interstitial space and arborize adjacent to each other. The pulmonary veins return blood to the heart in a separate interstitial space and have a slightly different arborization pattern. As the pulmonary venous pressure increases, fluid leaks from the pulmonary capillaries into the adjacent interstitium. This interstitial pul-monary edema may be identified by peribronchial cuffing, in-distinctness of the perivascular margins, perihilar haziness, and thickening of the interlobular septa and interlobar fis-sures. Septal thickening results in Kerley A (arrow) and Kerley B (arrowhead) lines on chest radiograph (Figure 4-25). As the pulmonary capillary pressure increases further, fluid spills into the alveoli, producing a symmetrical appearance of air-space filling that is predominantly perihilar (central) and basilar in distribution. Cardiogenic edema is greatest in de-pendent regions of the lungs. In supine patients, the depend-ent regions are the posterior segments of the upper lobes, and the superior and posterior basilar segments of the lower lobes. The central pattern of pulmonary edema has been called “bat-wing” edema (Figure 4-26). As the pulmonary edema worsens, the pulmonary and pleural lymphatics clear fluid from the lungs, and pleural effusions will develop. In conges-tive heart failure, the pleural effusions are generally small to moderate in size, and there is typically more fluid within the right pleural space than the left. Isolated left pleural effusion is unlikely to be due to congestive heart failure. In cardiogenic edema, the heart size will be increased. The cardiothoracic ratio is a guide to determining cardiac enlargement. The transverse dimension of the heart is divided by the transverse diameter of the thorax at the same level. When the cardio-thoracic ratio is greater than 0.5, cardiomegaly is often (but not always) present. When possible, both the PA and lateral projections should be used to determine cardiac volume. Cardiomegaly may be more readily recognized when com-parison is made with prior radiographs. Comparison re-quires a similar depth of inspiration and similar positioning of the patient (AP versus PA, supine versus erect). 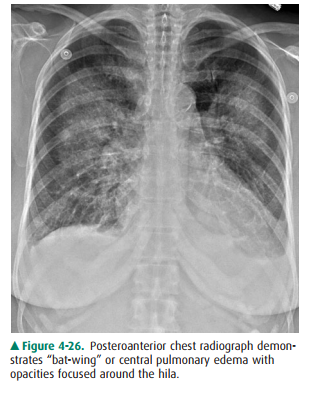 Noncardiogenic edema (Figure 4-27), or “capillary leak” edema, may be due to a number of conditions, including adult respiratory distress syndrome, fat embolism, amniotic fluid embolism, drug overdose, near drowning, and acute air-way obstruction. The cause of pulmonary edema in patients with intracranial injury or tumor (neurogenic pulmonary edema) is uncertain. Similarly, the etiology of high-altitude pulmonary edema is incompletely understood. The common radiographic findings in noncardiogenic edema are symmet-ric, diffuse areas of airspace filling that is often patchier in appearance and more peripheral in distribution. The heart size is usually normal; pleural effusions and septal lines are typically absent. The vascular pedicle is of normal width. 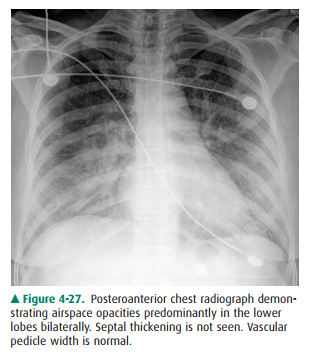 Renal failure and volume overload may result in pul-monary edema, which may be chronic. When the degree of edema is small to moderate, patients are often reasonably well compensated and are able to carry out many activities of daily living.