All matter, both living and not living, is made of ele-ments, the simplest chemicals.

All matter, both living and not living, is made of ele-ments, the simplest chemicals. An element is a sub-stance made of only one type of atom (therefore, an atom is the smallest part of an element). There are 92 naturally occurring elements in the world around us. Examples are hydrogen (H), iron (Fe), oxygen (O), calcium (Ca), nitrogen (N), and carbon (C). In nature, an element does not usually exist by itself but rather combines with the atoms of other elements to form compounds. Examples of some compounds important to our study of the human body are water (H2O), in which two atoms of hydrogen combine with one atom of oxygen; carbon dioxide (CO2), in which an atom of carbon combines with two atoms of oxygen; and glu-cose (C6H12O6), in which six carbon atoms and six oxygen atoms combine with 12 hydrogen atoms.

The elements carbon, hydrogen, oxygen, nitrogen, phosphorus, and sulfur are found in all living things. If calcium is included, these seven elements make up approximately 99% of the human body (weight).

More than 20 different elements are found, in varying amounts, in the human body. Some of these are listed in Table 2–1. As you can see, each element has a standard chemical symbol. This is simply the first (and sometimes the second) letter of the element’s English or Latin name. You should know the symbols of the elements in this table. 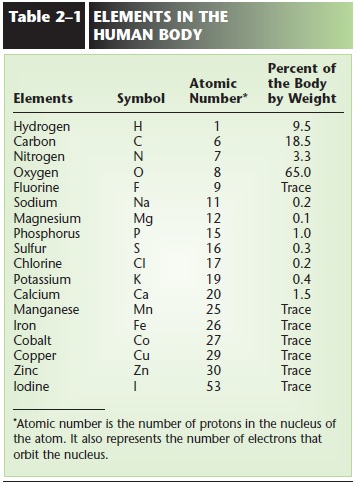 Notice that if a two-letter symbol is used for an element, the second letter is always lowercase, not a capital. For example, the symbol for calcium is Ca, not CA. CA is an abbreviation often used for cancer.