The nucleic acids, DNA (deoxyribonucleic acid) and RNA (ribonucleic acid), are large molecules made of smaller subunits called nucleotides. A nucleotide con-sists of a pentose sugar, a phosphate group, and one of  several nitrogenous bases. In DNA nucleotides, the sugar is deoxyribose, and the bases are adenine, gua-nine, cytosine, or thymine. In RNA nucleotides, the sugar is ribose, and the bases are adenine, guanine, cytosine, or uracil. DNA and RNA molecules are shown in Fig. 2–10. Notice that DNA looks somewhat like a twisted ladder; this ladder is two strands of nucleotides called a double helix (two coils). 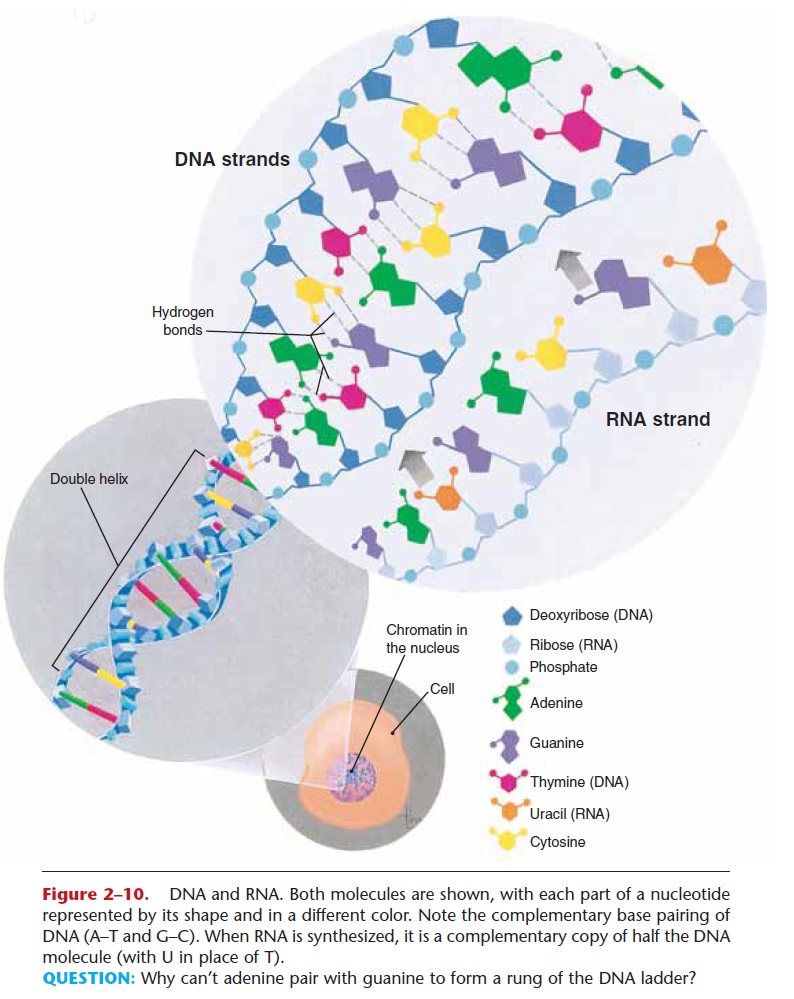 Figure 2–10. DNA and RNA. Both molecules are shown, with each part of a nucleotide represented by its shape and in a different color. Note the complementary base pairing of DNA (A–T and G–C). When RNA is synthesized, it is a complementary copy of half the DNA molecule (with U in place of T).

QUESTION: Why can’t adenine pair with guanine to form a rung of the DNA ladder?

Alternating phosphate and sugar molecules form the uprights of the ladder, and pairs of nitrogenous bases form the rungs. The size of the bases and the number of hydro-gen bonds each can form the complementary base pairing of the nucleic acids. In DNA, adenine is always paired with thymine (with two hydrogen bonds), and guanine is always paired with cytosine (with three hydrogen bonds).

DNA makes up the chromosomes of cells and is, therefore, the genetic code for hereditary characteris-tics. The sequence of bases in the DNA strands is actu-ally a code for the many kinds of proteins living things produce; the code is the same in plants, other animals, and microbes. The sequence of bases for one protein is called a gene. Human genes are the codes for the pro-teins produced by human cells (though many of these genes are also found in all other forms of life—we are all very much related).

RNA is often a single strand of nucleotides (see Fig. 2–10), with uracil nucleotides in place of thymine nucleotides. RNA is synthesized from DNA in the nucleus of a cell but carries out a major function in the cytoplasm.

ATP (adenosine triphosphate) is a specialized nucleotide that consists of the base adenine, the sugar ribose, and three phosphate groups. Mention has already been made of ATP as a product of cell respira- tion that contains biologically useful energy. ATP is one of several “energy transfer” molecules within cells, transferring the potential energy in food mole-cules to cell processes. When a molecule of glucose is broken down into carbon dioxide and water with the release of energy, the cell uses some of this energy to synthesize ATP. Present in cells are molecules of ADP (adenosine diphosphate) and phosphate. The energy released from glucose is used to loosely bond a third phosphate to ADP, forming ATP. When the bond of this third phosphate is again broken and energy is released, ATP then becomes the energy source for cell processes such as mitosis.

All cells have enzymes that can remove the third phosphate group from ATP to release its energy, forming ADP and phosphate. As cell respiration con-tinues, ATP is resynthesized from ADP and phos-phate. ATP formation to trap energy from food and breakdown to release energy for cell processes is a continuing cycle in cells.

The structure and functions of the nucleic acids are summarized in Table 2–6.