A chemical bond is not a structure, but rather a force or attraction between positive and negative electrical charges that keeps two or more atoms closely associ-ated with each other to form a molecule.

A chemical bond is not a structure, but rather a force or attraction between positive and negative electrical charges that keeps two or more atoms closely associ-ated with each other to form a molecule. By way of comparison, think of gravity. We know that gravity is not a “thing,” but rather the force that keeps our feet on the floor and allows us to pour coffee with consis- often have physical characteristics different from those of the atoms of the original elements. For example, the elements hydrogen and oxygen are gases, but atoms of each may chemically bond to form molecules of water, which is a liquid.

The type of chemical bonding depends upon the tendencies of the electrons of atoms involved, as you will see. Four kinds of bonds are very important to the chemistry of the body: ionic bonds, covalent bonds, disulfide bonds, and hydrogen bonds.

An ionic bond involves the loss of one or more elec-trons by one atom and the gain of the electron(s) by another atom or atoms. Refer to Fig. 2–2 as you read the following.

An atom of sodium (Na) has one electron in its out-ermost shell, and in order to become stable, it tends to lose that electron. When it does so, the sodium atom has one more proton than it has electrons. Therefore, it now has an electrical charge (or valence) of 11 and is called a sodium ion (Na+). An atom of chlorine has seven electrons in its outermost shell, and in order to become stable tends to gain one electron. When it does so, the chlorine atom has one more electron than it has protons, and now has a charge (valence) of 21. It is called a chloride ion (Cl2).

When an atom of sodium loses an electron to an atom of chlorine, their ions have unlike charges (pos-itive and negative) and are thus attracted to one another. The result is the formation of a molecule of sodium chloride: NaCl, or common table salt. The bond that holds these ions together is called an ionic bond.

Figure 2–2. Formation of an ionic bond. An atom of sodium loses an electron to an atom of chlorine. The two ions formed have unlike charges, are attracted to one another, and form a molecule of sodium chloride.

QUESTION: Why is the charge of a sodium ion 11?

Another example is the bonding of chlorine to cal-cium. An atom of calcium has two electrons in its out-ermost shell and tends to lose those electrons in order to become stable. If two atoms of chlorine each gain one of those electrons, they become chloride ions. The positive and negative ions are then attracted to one another, forming a molecule of calcium chloride, CaCl2, which is also a salt. A saltis a molecule made of ions other than hydrogen (H1) ions or hydroxyl (OH-) ions.

In the solid state, ionic bonds are relatively strong. Our bones, for example, contain the salt calcium car-bonate (CaCO3), which helps give bone its strength. However, in an aqueous (water) solution, many ionic bonds are weakened. The bonds may become so weak that the bound ions of a molecule separate, creating a solution of free positive and negative ions. For exam-ple, if sodium chloride is put in water, it dissolves, then ionizes. The water now contains Na+ ions and Cl2 ions. Ionization, also called dissociation, is important to living organisms because once dissociated, the ions are free to take part in other chemical reactions within the body. Cells in the stomach lining produce hydrochloric acid (HCl) and must have Cl2 ions to do so. The chloride in NaCl would not be free to take part in another reaction since it is tightly bound to the sodium atom. However, the Cl2 ions available from ionized NaCl in the cellular water can be used for the synthesis, or chemical manufacture, of HCl in the stomach.

Covalent bonds involve the sharing of electrons between atoms. As shown in Fig. 2–3, an atom of oxy-gen needs two electrons to become stable. It may share two of its electrons with another atom of oxy-gen, also sharing two electrons. Together they form a molecule of oxygen gas (O2), which is the form in which oxygen exists in the atmosphere.

An atom of oxygen may also share two of its elec-trons with two atoms of hydrogen, each sharing its single electron (see Fig. 2–3). Together they form a molecule of water (H2O). When writing structural formulas for chemical molecules, a pair of shared elec-trons is indicated by a single line, as shown in the for-mula for water; this is a single covalent bond. A double covalent bond is indicated by two lines, as in the for-mula for oxygen; this represents two pairs of shared electrons.

The element carbon always forms covalent bonds; an atom of carbon has four electrons to share with other atoms. If these four electrons are shared with four atoms of hydrogen, each sharing its one electron, a molecule of methane gas (CH4) is formed. Carbon may form covalent bonds with other carbons, hydro-gen, oxygen, nitrogen, or other elements. Organic 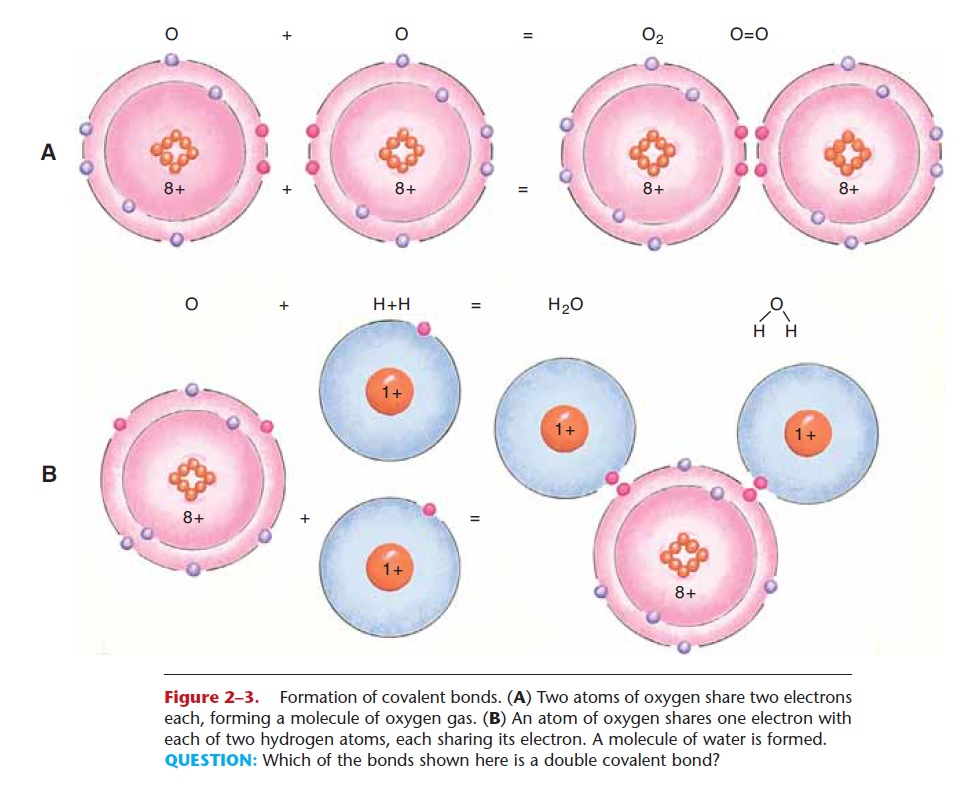 Figure 2–3. Formation of covalent bonds. (A) Two atoms of oxygen share two electrons each, forming a molecule of oxygen gas. (B) An atom of oxygen shares one electron with each of two hydrogen atoms, each sharing its electron. A molecule of water is formed.

QUESTION: Which of the bonds shown here is a double covalent bond?

compounds such as proteins and carbohydrates are complex and precise arrangements of these atoms covalently bonded to one another. Covalent bonds are relatively strong and are not weakened in an aqueous solution. This is important because the proteins pro-duced by the body, for example, must remain intact in order to function properly in the water of our cells and blood.

A disulfide bond (also called a disulfide bridge) is a covalent bond formed between two atoms of sulfur, usually within the same large protein molecule. The hormone insulin, for example, is a protein that must have a very specific three-dimensional shape in order to function properly to regulate the blood glucose level. Each molecule of insulin has two disulfide bonds that help maintain its proper shape and function. Other proteins with shapes that depend upon disulfide bonds are antibodies of the immune system (see Fig. 14–8) and keratin of the skin and hair.

A strand of hair maintains its shape (a genetic char-acteristic) because of disulfide bonds. When naturally curly hair is straightened, the disulfide bonds in the keratin molecules are broken. When naturally straight hair is “permed” or curled, the disulfide bonds in the keratin are first broken, then re-formed in the curled hair. Neither process affects the living part of the hair, the hair root, so the hair will grow out in its original shape. We would not want such a process affecting our insulin or antibody molecules, for that would destroy their functioning.

A hydrogen bond does not involve the sharing or exchange of electrons, but rather results because of a property of hydrogen atoms. When a hydrogen atom shares its one electron in a covalent bond with another atom, its proton has a slight positive charge and may then be attracted to a nearby oxygen or nitrogen atom, which has a slight negative charge.

Although they are weak bonds, hydrogen bonds are important in several ways. Large organic molecules such as proteins and DNA have very specific functions that depend upon their three-dimensional shapes. The shapes of these molecules, so crucial to their proper functioning, are often maintained by hydrogen bonds.

Hydrogen bonds also make water cohesive; that is, each water molecule is attracted to nearby water mol-ecules. Such cohesiveness can be seen if water is dropped onto clean glass; the surface tension created by the hydrogen bonds makes the water form three-dimensional beads. Within the body, the cohesiveness of water helps keep blood a continuous stream as it flows within the blood vessels, and keeps tissue fluid continuous around cells. These hydrogen bonds are also responsible for the other important characteris-tics of water, which are discussed in a later section.