Lipids contain the elements carbon, hydrogen, and oxygen; some also contain phosphorus. In this group of organic compounds are different types of sub-stances with very different functions. We will con-sider three types: true fats, phospholipids, and steroids (Fig. 2–7).

Unsaturated fats may be changed to saturated fats in order to give packaged foods a more pleasing tex-ture or taste, or to allow them to be stored longer without refrigeration (a longer shelf life). These are hydrogenated fats (meaning that hydrogens have been added), also called trans fats. Trans fats contribute sig-nificantly to atherosclerosis of arteries, that is, abnormal cholesterol deposits in the lining that ma clog arteries, especially the coronary arteries of the heart.

The triglyceride forms of true fats are a storage form for excess food, that is, they are stored energy (potential energy). Any type of food consumed in excess of the body’s caloric needs will be converted to fat and stored in adipose tissue. Most adipose tissue is subcutaneous, between the skin and muscles. Some organs, however, such as the eyes and kidneys, are enclosed in a layer of fat that acts as a cushion to absorb shock.

Phospholipids are diglycerides with a phosphate group (PO4) in the third bonding site of glycerol. Although similar in structure to the true fats, phos-pholipids are not stored energy but rather structural components of cells. Lecithin is a phospholipid that is part of our cell membranes (see Fig. 3–1; each phos-pholipid molecule looks like a sphere with two tails; the sphere is the glycerol and phosphate, the tails are the two fatty acids). Another phospholipid is myelin, which forms the myelin sheath around nerve cells and provides electrical insulation for nerve impulse trans-mission. 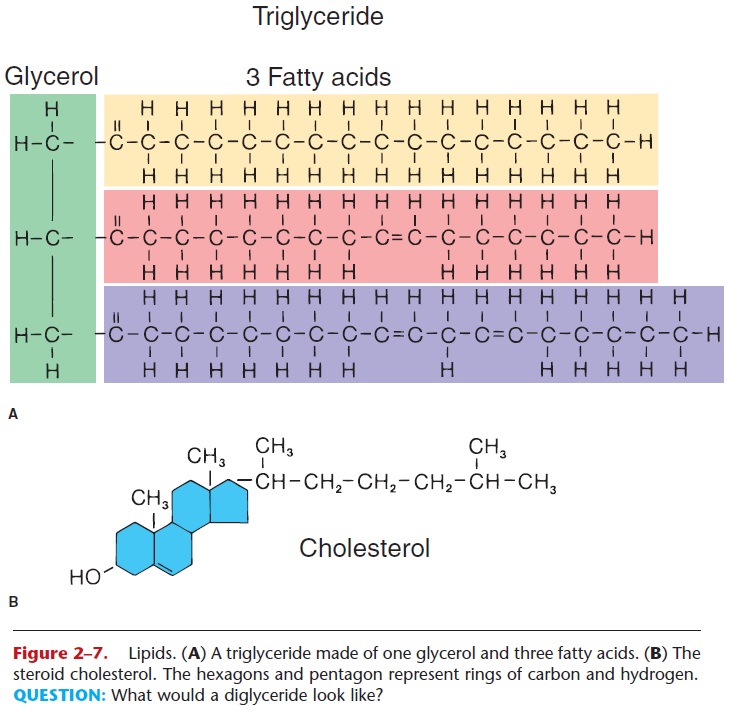 Figure 2–7. Lipids. (A) A triglyceride made of one glycerol and three fatty acids. (B) The steroid cholesterol. The hexagons and pentagon represent rings of carbon and hydrogen. QUESTION: What would a diglyceride look like?

The structure of steroids is very different from that of the other lipids. Cholesterol is an important steroid; it is made of four rings of carbon and hydro-gen (not fatty acids and glycerol) and is shown in Fig. 2–7. The liver synthesizes cholesterol, in addition to the cholesterol we eat in food as part of our diet. Cholesterol is another component of cell membranes and is the precursor (raw material) for the synthesis of other steroids. In the ovaries or testes, cholesterol is used to synthesize the steroid hormones estrogen or testosterone, respectively. A form of cholesterol in the skin is changed to vitamin D on exposure to sunlight. Liver cells use cholesterol for the synthesis of bile salts, which emulsify fats in digestion. Despite its link to coronary artery disease and heart attacks, choles-terol is an essential substance for human beings.

The structure and functions of lipids are summarized in Table 2–4.