Inorganic compounds are usually simple molecules that often consist of only one or two different ele-ments. Despite their simplicity, however, some inor-ganic compounds are essential to normal structure and functioning of the body.

Inorganic compounds are usually simple molecules that often consist of only one or two different ele-ments. Despite their simplicity, however, some inor-ganic compounds are essential to normal structure and functioning of the body.

Water makes up 60% to 75% of the human body, and is essential to life for several reasons:

1. Water is a solvent; that is, many substances (called solutes) can dissolve in water. Nutrients such as glucose are dissolved in blood plasma (which is largely water) to be transported to cells throughout the body. The sense of taste depends upon the sol-vent ability of saliva; dissolved food stimulates the receptors in taste buds. The excretion of waste products is possible because they are dissolved in the water of urine.

2. Water is a lubricant, which prevents friction where surfaces meet and move. In the digestive tract, swallowing depends upon the presence of saliva, and mucus is a slippery fluid that permits the smooth passage of food through the intestines. Synovial fluid within joint cavities prevents friction as bones move.

All water within the body is continually moving, but water is given different names when it is in specific body locations, which are called compartments (Fig. 2–4).

Intracellular fluid (ICF)—the water within cells; about 65% of the total body water

Specialized fluids—synovial fluid, cerebrospinal fluid, aqueous humor in the eye, and others

The movement of water between compartments in the body. 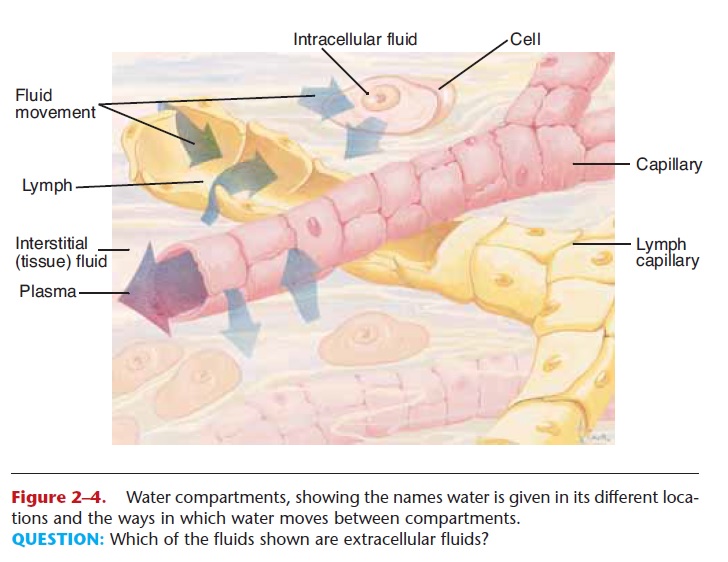 Figure 2–4. Water compartments, showing the names water is given in its different loca-tions and the ways in which water moves between compartments.

QUESTION: Which of the fluids shown are extracellular fluids?

Oxygen in the form of a gas (O2) is approximately 21% of the atmosphere, which we inhale. We all know that without oxygen we wouldn’t survive very long, but exactly what does it do? Oxygen is important to us because it is essential for a process called cell respira-tion, in which cells break down simple nutrients such as glucose in order to release energy. The reason we breathe is to obtain oxygen for cell respiration and to exhale the carbon dioxide produced in cell respiration (this will be discussed in the next section). Biologically useful energy that is released by the reactions of cell respiration is trapped in a molecule called ATP (adenosine triphosphate). ATP can then be used for cellular processes that require energy.

Carbon dioxide (CO2) is produced by cells as a waste product of cell respiration. You may ask why a waste product is considered important. Keep in mind that “important” does not always mean “beneficial,” but it  does mean “significant.” If the amount of carbon di-oxide in the body fluids increases, it causes these fluids to become too acidic. Therefore, carbon dioxide must be exhaled as rapidly as it is formed to keep the amount in the body within normal limits. Normally this is just what happens, but severe pulmonary dis-eases such as pneumonia or emphysema decrease gas exchange in the lungs and permit carbon dioxide to accumulate in the blood. When this happens, a person is said to be in a state of acidosis, which may seriously disrupt body functioning.

Cell respiration is the name for energy production within cells and involves both respiratory gases, oxy-gen and carbon dioxide. Many chemical reactions are involved, but in its simplest form, cell respiration may be summarized by the following equation:

This reaction shows us that glucose and oxygen combine to yield carbon dioxide, water, ATP, and heat. Food, represented here by glucose, in the presence of oxygen is broken down into the simpler molecules carbon dioxide and water. The potential energy in the glucose molecule is released in two forms: ATP and heat. Each of the four products of this process has a purpose or significance in the body. The carbon diox-ide is a waste product that moves from the cells into the blood to be carried to the lungs and eventually exhaled. The water formed is useful and becomes part of the intracellular fluid. The heat produced con-tributes to normal body temperature. ATP is used for cell processes such as mitosis, protein synthesis, and muscle contraction, all of which require energy and will be discussed a bit further on in the text.

We will also return to cell respiration in later chap-ters. For now, the brief description just given will suf-fice to show that eating and breathing are interrelated; both are essential for energy production.

Trace elements are those that are needed by the body in very small amounts. When they are present in food or nutritional supplements, we often call them miner-als, and examples are iron, cobalt, and zinc. Although they may not be as abundant in the body as are carbon, hydrogen, or oxygen, they are nonetheless essential. Table 2–2 lists some of these trace elements and their functions . 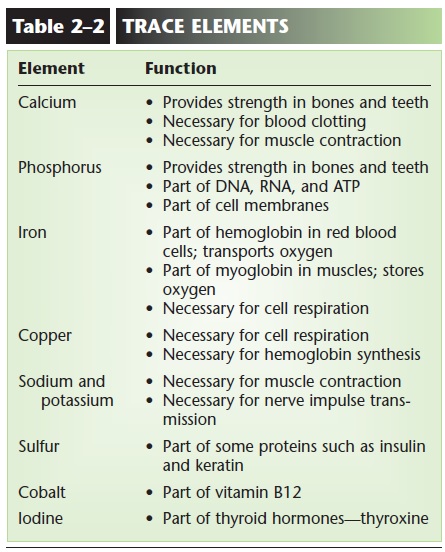 The acidity or alkalinity (basicity) of a solution is measured on a scale of values called pH (parts hydro-gen). The values on the pH scale range from 0 to 14,with 0 indicating the most acidic level and 14 the mostalkaline. A solution with a pH of 7 is neutral becauseit contains the same number of H+ ions and OH- ions. Pure water has a pH of 7. A solution with a higher concentration of H+ions than OH- ions is an acidic solution with a pH below 7. An alkaline solution, therefore, has a higher concentration of OH-ions than H+ ions and has a pH above 7. 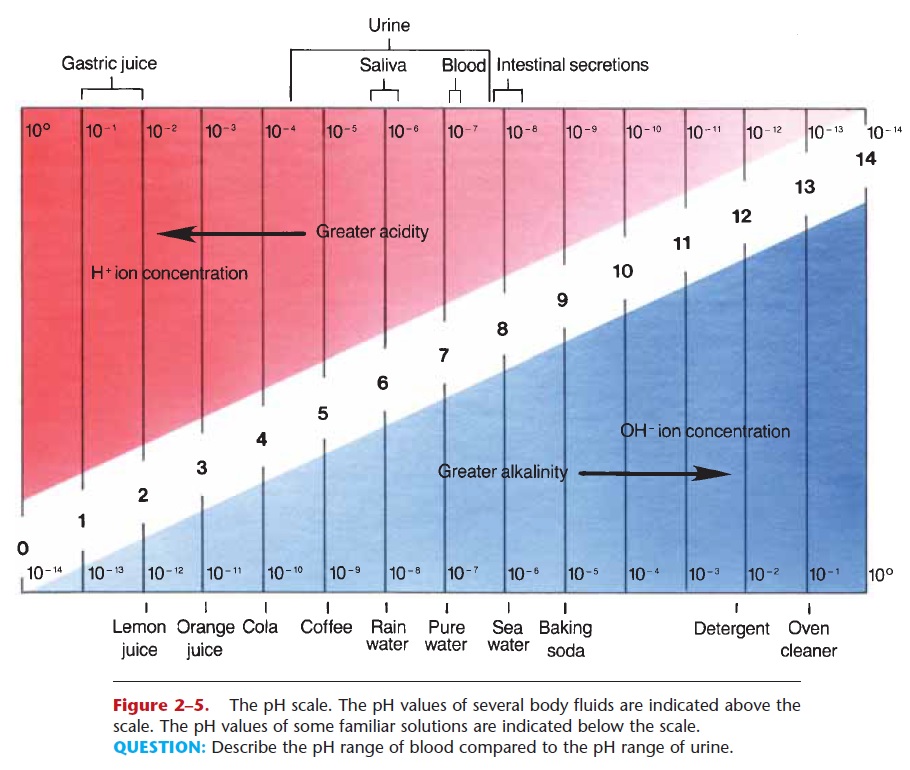 This means that gastric juice has 10,000 times as many H+ ions as does coffee. Although coffee is acidic, it is a weak acid and does not have the corrosive effect of gastric juice, a strong acid.

The cells and internal fluids of the human body have a pH close to neutral. The pH of intracellular fluid is around 6.8, and the normal pH range of blood is 7.35 to 7.45. Fluids such as gastric juice and urine are technically external fluids, because they are in body tracts that open to the environment. The pH of these fluids may be more strongly acidic or alkaline without harm to the body.

The pH of blood, however, must be maintainedwithin  its  very  narrow,  slightly  alkaline  range.  Adecrease of only one pH unit, which is 10 times asmany H+ ions, would disrupt the chemical reactions of the blood and cause the death of the individual.Normal metabolism tends to make body fluids more acidic, and this tendency to acidosis must be continu-ally corrected. Normal pH of internal fluids is main-tained by the kidneys, respiratory system, and buffer systems.

A buffer system is a chemical or pair of chemicals that minimizes changes in pH by reacting with strong acids or strong bases to transform them into sub-stances that will not drastically change pH. Expressed in another way, a buffer may bond to H+ ions when a body fluid is becoming too acidic, or release H+ ions when a fluid is becoming too alkaline.

As a specific example, we will use the bicarbonate buffer system, which consists of carbonic acid (H2CO3), a weak acid, and sodium bicarbonate (NaHCO3), a weak base. This pair of chemicals is present in all body fluids but is especially important to buffer blood and tissue fluid.

Carbonic acid ionizes as follows (but remember, because it is a weak acid it does not contribute many H+ ions to a solution):

If a strong acid, such as HCl, is added to extracel-lular fluid, this reaction will occur:

What has happened here? Hydrochloric acid, a strong acid that would greatly lower pH, has reacted with sodium bicarbonate. The products of this reac-tion are NaCl, a salt that has no effect on pH, and H2CO3, a weak acid that lowers pH only slightly. This prevents a drastic change in the pH of the extracellu-lar fluid.

If a strong base, such as sodium hydroxide, is added to the extracellular fluid, this reaction will occur:

Sodium hydroxide, a strong base that would greatlyraise pH, has reacted with carbonic acid. The products of this reaction are water, which has no effect on pH, and sodium bicarbonate, a weak base that raises pH only slightly. Again, this prevents a drastic change in the pH of the extracellular fluid.

In the body, such reactions take place in less than a second whenever acids or bases are formed that would greatly change pH. Because of the body’s tendency to become more acidic, the need to correct acidosis is more frequent. With respect to the bicarbonate buffer system, this means that more NaHCO3 than H2CO3 is needed. For this reason, the usual ratio of these buffers is 20:1 (NaHCO3:H2CO3).