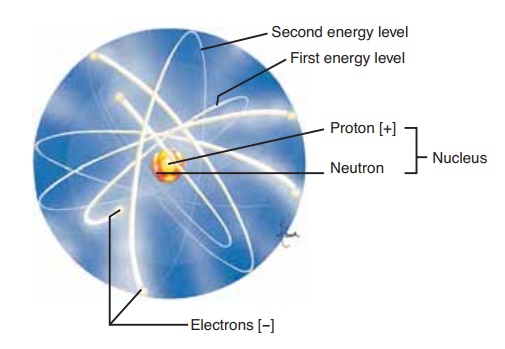 Atoms are the smallest parts of an element that have the characteristics of that element.

Atoms are the smallest parts of an element that have the characteristics of that element. An atom consists of three major subunits or particles: protons, neutrons, and electrons (Fig. 2–1). A proton has a positive elec-trical charge and is found in the nucleus (or center) of the atom. A neutron is electrically neutral (has no charge) and is also found in the nucleus. An electron has a negative electrical charge and is found outside the nucleus orbiting in what may be called an electron cloud or shell around the nucleus. 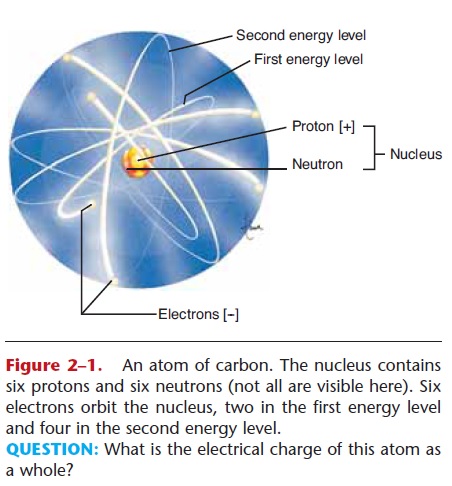 Figure 2–1. An atom of carbon. The nucleus contains six protons and six neutrons (not all are visible here). Six electrons orbit the nucleus, two in the first energy level and four in the second energy level.

QUESTION: What is the electrical charge of this atom as a whole?

The number of protons in an atom gives it its atomic number. Protons and neutrons have mass and weight; they give an atom itsatomic weight. In an atom, the number of protons (1) equals the number of electrons (2); therefore, an atom is electrically neu-tral. The electrons, however, are important in that they may enable an atom to connect, or bond, to other atoms to form molecules. A molecule is a combina-tion of atoms (usually of more than one element) that are so tightly bound together that the molecule behaves as a single unit.

A few atoms (elements) are naturally stable, or uninterested in reacting, because their outermost energy level already contains the maximum number of electrons. The gases helium and neon are examples of these stable atoms, which do not usually react with other atoms. Most atoms are not stable, however, and tend to gain, lose, or share electrons in order to fill their outermost shell. By doing so, an atom is capable of forming one or more chemical bonds with other atoms. In this way, the atom becomes stable, because its outermost shell of electrons has been filled. It is these reactive atoms that are of interest in our study of anatomy and physiology.