A primary function of carbohydrates is to serve as sources of energy in cell respiration.

Organic compounds all contain covalently bonded carbon and hydrogen atoms and perhaps other ele-ments as well. In the human body there are four major groups of organic compounds: carbohydrates, lipids, proteins, and nucleic acids.

A primary function of carbohydrates is to serve as sources of energy in cell respiration. All carbohydrates contain carbon, hydrogen, and oxygen and are classi-fied as monosaccharides, disaccharides, oligosaccha-rides, and polysaccharides. Saccharide means sugar, and the prefix indicates how many are present.

Monosaccharides, or single-sugar compounds, are the simplest sugars. Glucose is a hexose, or six-carbon, sugar with the formula C6H12O6 (Fig. 2–6). Fructose and galactose also have the same formula, but the physical arrangement of the carbon, hydrogen, and oxygen atoms in each differs from that of glu-cose. This gives each hexose sugar a different three-dimensional shape. The liver is able to change fructose and galactose to glucose, which is then used by cells in the process of cell respiration to produce ATP. 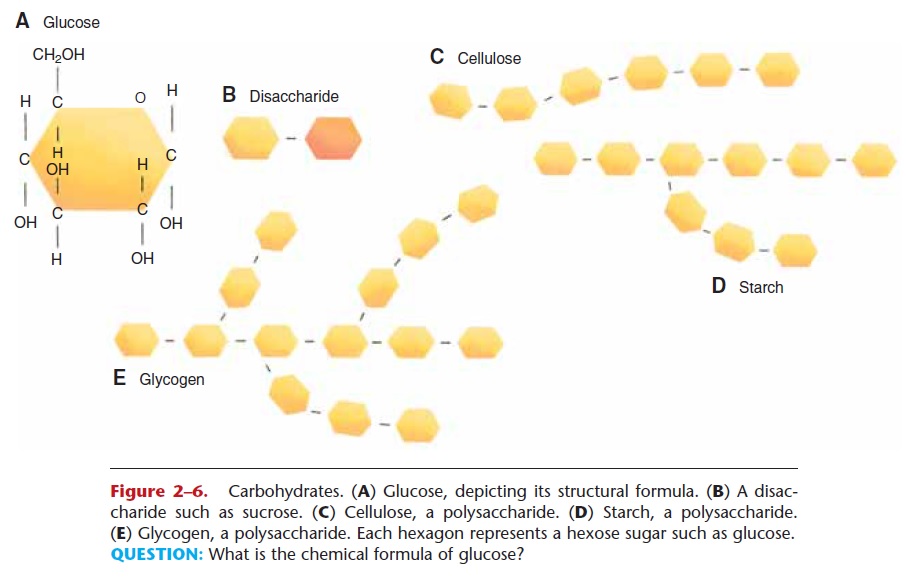 Another type of monosaccharide is the pentose, or five-carbon, sugar. These are not involved in energy production but rather are structural components of the nucleic acids. Deoxyribose (C5H10O4) is part of DNA, which is the genetic material of chromosomes. Ribose (C5H10O5) is part of RNA, which is essential for protein synthesis.

The prefix oligo means “few”; oligosaccharides consist of from 3 to 20 monosaccharides. In human cells, oligosaccharides are found on the outer surface of cell membranes. Here they serve as antigens, which are chemical markers (or “signposts”) that iden-tify cells. The A, B, and AB blood types, for example, are the result of oligosaccharide antigens on the outer surface of red blood cell membranes. All of our cells have “self” antigens, which identify the cells that belong in an individual. The presence of “self” anti-gens on our own cells enables the immune system to recognize antigens that are “non-self.”

Polysaccharides are made of thousands of glucose molecules, bonded in different ways, resulting in dif-ferent shapes (see Fig. 2–6).Starches are branched chains of glucose and are produced by plant cells to store energy. We have digestive enzymes that split the bonds of starch molecules, releasing glucose. The glu-cose is then absorbed and used by cells to produce ATP.

Glycogen, a highly branched chain of glucose mol-ecules, is our own storage form for glucose. After a meal high in carbohydrates, the blood glucose level rises. Excess glucose is then changed to glycogen and stored in the liver and skeletal muscles. When the blood glucose level decreases between meals, the glycogen is converted back to glucose, which is released into the blood (these reactions are regulated by insulin and other hormones). The blood glucose level is kept within normal limits, and cells can take in this glucose to produce energy.

Cellulose is a nearly straight chain of glucose mol-ecules produced by plant cells as part of their cell walls. We have no enzyme to digest the cellulose we consume as part of vegetables and grains, and it passes through the digestive tract unchanged. Another name for dietary cellulose is “fiber,” and although we cannot use its glucose for energy, it does have a function. Fiber provides bulk within the cavity of the large intestine. This promotes efficient peristalsis, the waves of contraction that propel undigested material through the colon. A diet low in fiber does not give the colon much exercise, and the muscle tissue of the colon will contract weakly, just as our skeletal muscles will become flabby without exercise. A diet high in fiber provides exercise for the colon muscle and may help prevent chronic constipation.

The structure and functions of the carbohydrates are summarized in Table 2–3. 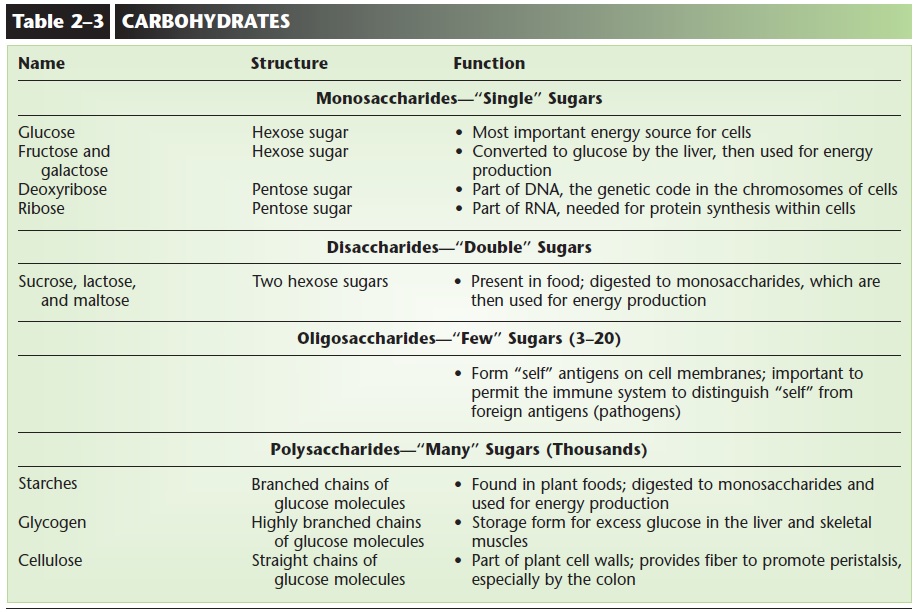