Chapter: Essentials of Anatomy and Physiology: Organization and General Plan of the Body

Terminology and General Plan of the Body

As part of your course in anatomy and physiology, you will learn many new words or terms.

TERMINOLOGY AND GENERAL PLAN OF THE BODY

As part of your course in anatomy and physiology, you will learn many new words or terms. At times you may feel that you are learning a second language, and indeed you are. Each term has a precise meaning, which is understood by everyone else who has learned the language. Mastering the terminology of your pro-fession is essential to enable you to communicate effec-tively with your coworkers and your future patients. Although the number of new terms may seem a bit overwhelming at first, you will find that their use soon becomes second nature to you.

Each of the terms listed in Table 1–2 and shown in Fig. 1–4 refers to a specific part or area of the body. For example, the term femoralalways refers to the thigh. The femoral artery is a blood vessel that passes through the thigh, and the quadriceps femoris is a large muscle group of the thigh. 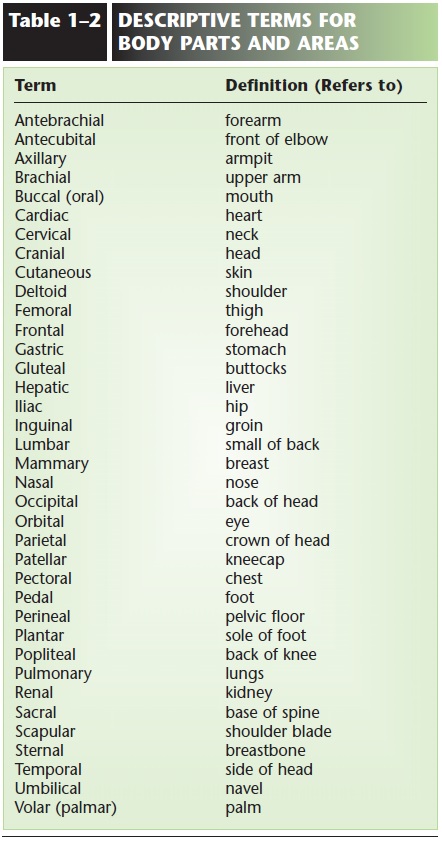 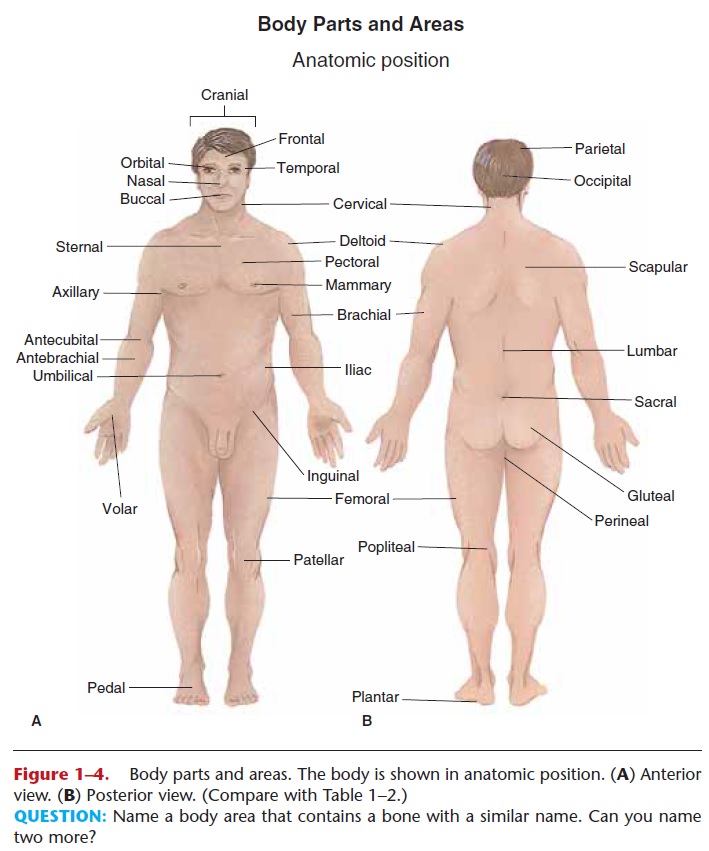 Another example is pulmonary, which always refers to the lungs, as in pulmonary artery, pulmonary edema, and pulmonary embolism. Although you may not know the exact meaning of each of these terms now, you do know that each has something to do with the lungs.

When describing relative locations, the body is always assumed to be in anatomic position: standing upright facing forward, arms at the sides with palms forward, and the feet slightly apart. The terms of location are listed in Table 1–3, with a definition and example for each. As you read each term, find the body parts used as examples in Figs. 1–4 and 1–5. Notice also that these are pairs of terms and that each pair is a set of opposites. This will help you recall the terms and their meanings. 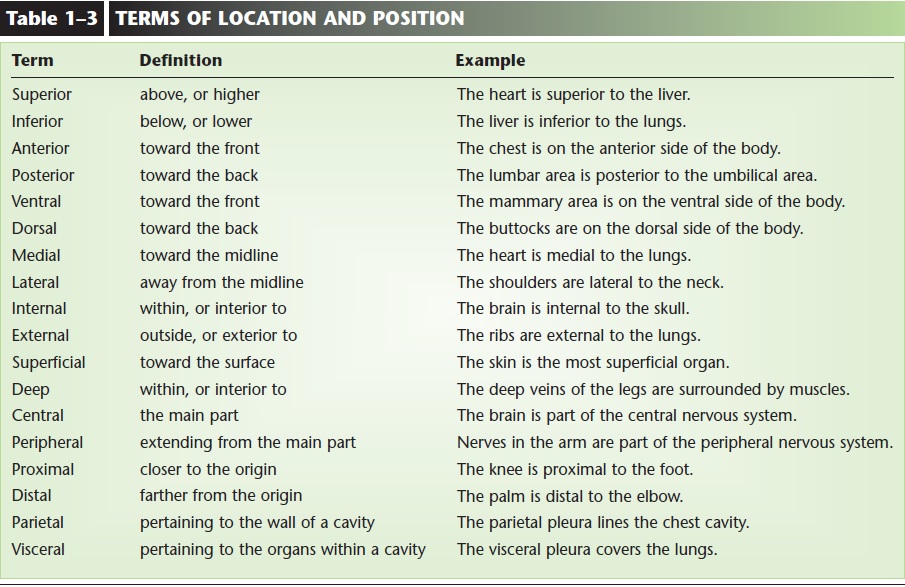 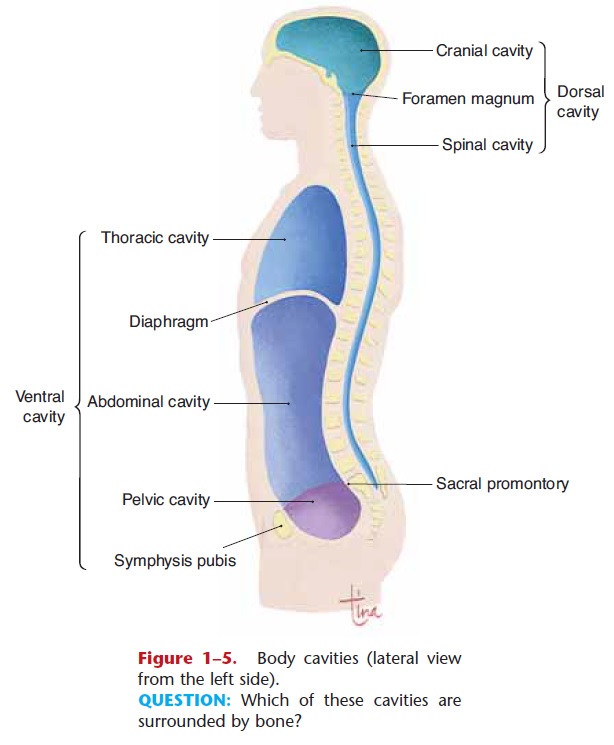 BODY CAVITIES AND THEIR MEMBRANES

The body has two major cavities: the dorsal cavity (posterior) and the ventral cavity (anterior). Each of these cavities has further subdivisions, which are shown in Fig. 1–5.

Organs in the thoracic cavity include the heart and lungs. The membranes of the thoracic cavity are serous membranes called thepleural membranes. The parietal pleura lines the chest wall, and the vis-ceral pleura covers the lungs. The heart has its own set of serous membranes called the pericardial mem-branes. The parietal pericardium lines the fibrous pericardial sac, and the visceral pericardium covers the heart muscle.

The pelvic cavity is inferior to the abdominal cav-ity. Although the peritoneum does not line the pelvic cavity, it covers the free surfaces of several pelvic organs. Within the pelvic cavity are the urinary blad-der and reproductive organs such as the uterus in women and the prostate gland in men.

When internal anatomy is described, the body or an organ is often cut or sectioned in a specific way so as to make particular structures easily visible. A plane is an imaginary flat surface that separates two portions of the body or an organ. These planes and sections are shown in Fig. 1–6. 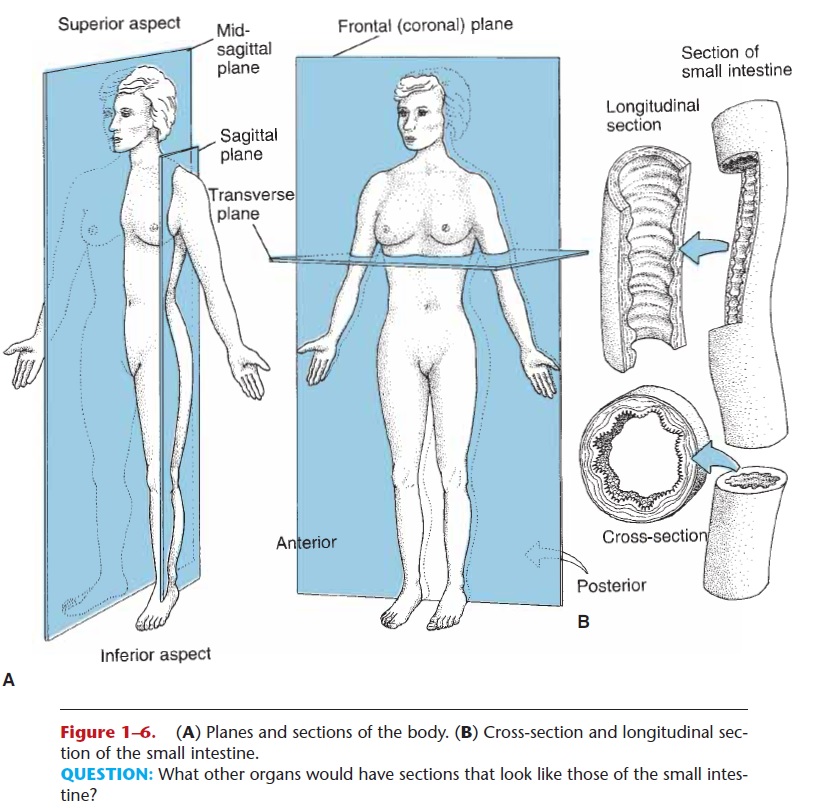 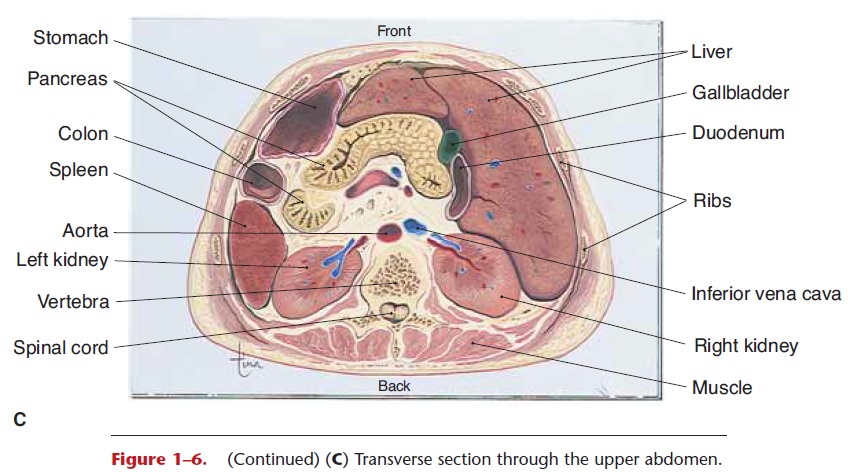 Figure 1–6. (A) Planes and sections of the body. (B) Cross-section and longitudinal sec-tion of the small intestine. (C) Transverse section through the upper abdomen.

QUESTION: What other organs would have sections that look like those of the small intes-tine?

Frontal (coronal) section—a plane from side to side separates the body into front and back portions.

Cross-section—a plane perpendicular to the long axis of an organ. A cross-section of the small intes-tine (which is a tube) would look like a circle with the cavity of the intestine in the center.

AREAS OF THE ABDOMEN

The abdomen is a large area of the lower trunk of the body. If a patient reported abdominal pain, the physi-cian or nurse would want to know more precisely where the pain was. To determine this, the abdomen may be divided into smaller regions or areas, which are shown in Fig. 1–7.

Quadrants—a transverse plane and a midsagittal plane that cross at the umbilicus will divide the abdomen into four quadrants. Clinically, this is probably the division used more frequently. The pain of gallstones might then be described as in the right upper quadrant.

Nine areas—two transverse planes and two sagittal planes divide the abdomen into nine areas:Upper areas—above the level of the rib cartilages are the left hypochondriac, epigastric, and right hypochondriac.

Lower areas—below the level of the top of the pelvic bone are the left iliac, hypogastric, and right iliac.

These divisions are often used in anatomic studies to describe the location of organs. The liver, for exam-ple, is located in the epigastric and right hypochon-driac areas. 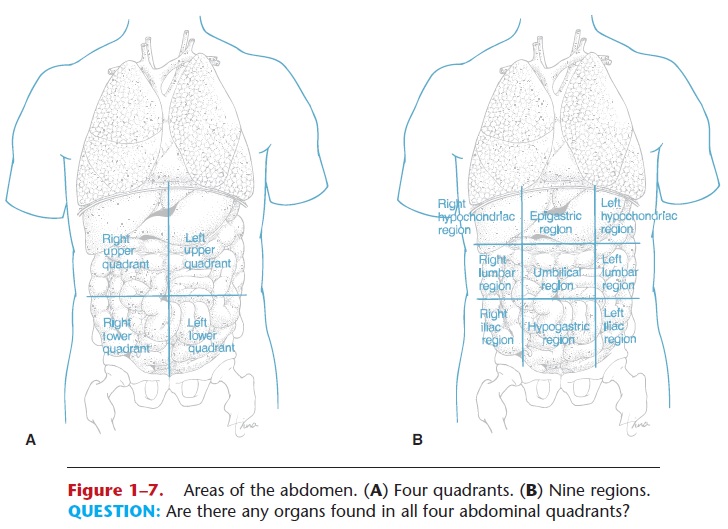 Figure 1–7.Areas of the abdomen. (A) Four quadrants. (B) Nine regions.

QUESTION: Are there any organs found in all four abdominal quadrants?