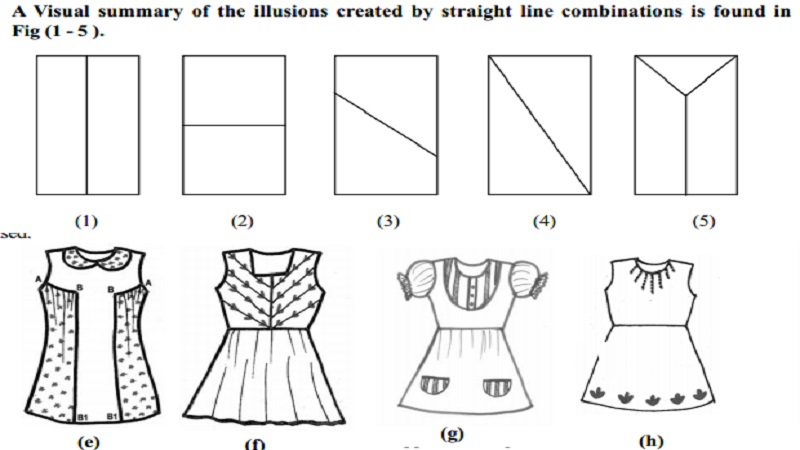 Line has different aspects including direction, thickness, sharpness of edge and length. It provides the visual dimensions of length and width.

A complete knowledge on the various fundemental elements of art and design would help a person to create and design a garment on an asthetic manner. To create beautiful garments consistantly one need to follow certain guidelines in selecting and arranging design elements. In creating a design one of the components which interact is the Design Elements.

The following are the different elements of Art.

These elements are considered as 'plastics' in art language because they can be manipulated or arranged by the designer to create a desired illusions.

1. Line: Line has different aspects including direction, thickness, sharpness of edge and length. It provides the visual dimensions of length and width. When lines combine, space is enclosed, forms and shapes are defined. Lines offered a path of vision for the eyes when wearing an outfit. Line has several functions,

To create a mood.

To define and create shape.

To lead the eye.

To establish a point of emphasis.

To create an illusion

To indicate dimension of length and width.

Types of lines: There are only two kinds of lines - straight lines and curved lines. Straight lines can take four directions. Vertical, horizontal, diagonal or zig zag. A curved line may be extreme, approaching a full circle or it may be very gentle or subtle almost straight.

Lines within a garment are created by darts, seams and decorative details. Each kind of line produces its own special effect. Straight lines and shapes denote force and strength and have a masculine quality, curved lines are the lines of nature, they are graceful and gives a feminine effect. Lines are the greatest devices of fashion designers. Since lines create illusion of height and width, they can be used to one's requirement to tone down a particular figure type.

Each direction of a straight line (vertical, horizontal, diagonal, zig zag, creates an optical effect or illusion that must be judged on the individual to identify the effect in a particular garment design.

The arrangement of lines in clothing design can cause to appear taller, shorter, heavier or thinner than what actually is and how line is used creates a mood in a garment. Line and the optical effect that they create, can make hips look small or large, shoulders look broad or narrow, and waists look thick or thin. The effects that lines produce are related to other factors such as,

The shape of the body wearing the design.

The colour of the fabric.

The degree of contrast that enable the lines to be noticed.

The comparison of adjacent shapes or spaces formed by lines.

The effect that the viewer has been pre conditioned to expect.

(ii) Vertical lines: These produce an illusion of added height to the outfit design by adding and contrasting coloured vertical band in the centre or a center panel shown in Fig. (a) added with vertical line gives an added height to the outfit. These lines tend to make a short person looks tall. Eg. Fig (b) princess style dress also has the same effect. When a vertical line is emphasized in garment design, the eye of the observer measures the length of that area. Noticeable vertical lines that divide skirt / pant and bodice / skirt areas can reduce the apparent visual width of these spaces. To illustrate a plain skirt, undivided by visible seaming, usually appears broader than a skirt with one or more vertical seams in the front and back sections. the angle and spacing of two or more visible vertical seams in the same garment will vary the effect of slimness and length.

(iii). Horizontal lines: These lines add width to the garment and decrease the apparent height, for eg. A wide contrast coloured belt shortens the height of the figure by cutting the garment into two segments, however the belt has the effect of slimming the waist line, the self coloured will not shorten the height of the outfit as well as the wearer. Fig

Diagonal lines: These lines add or decrease the height of the wearer depending on their slope. Long uninterrupted diagonals view almost vertically are the most lengthening and most dramatic of all lines Fig (d). Diagonal lines should be combined with vertical or horizontal lines. If they are used alone for the entire dress the effect will be disturbing

Curved lines: These lines are more romantic by nature and are considered graceful

and feminine, those in a diagonal direction are the most graceful and can be seen in the soft folds of material in a draped dress or a ruffled collar. Curved lines generally follow the contour of the body. When the curved line becomes exaggerated towards a full circle, it becomes very active and may easily be overdone. A restrained curve is graceful, flowing and gentle. Just as straight lines can conform to the body contour through fabric textures so do curved lines - with the effect of being extremely curvy. For eg: If a ruffle is added to a garment, the eye moves quickly over the smooth parts of the garment and tends to rest on the ruffle. Placing a ruffle at the wrist, therefore will attract attention there. Adding fullness to any part of a garment attracts attention. Curved lines can add weight to a thin person or even an angular person.

(vi) Zigzag lines: A zigzag is a series of connected diagonal lines. A zigzag forces the eye to shift direction abruptly and repeatedly in an erratic and jerky movement. This type of line is found most often

in fabric design. Because of the eye activity caused by zigzag lines, they tend to increase the apparent mass or size of the area covered by them.

A Visual summary of the illusions created by straight line combinations is found in Fig (1 - 5 ).

Fig. 1: Vertical line appears to lengthen, appears slimming as the eye moves up and down.

Fig. 2: Horizontal line appears to shorten, appears to widen as the eye travels across.

Fig. 3: Diagonal line appears to shorten and widen as the slant is closer to a horizontal.

Fig. 4: Diagonal line appears to lengthen as the slant is closer to a vertical.

(i) Transition: When one line direction slips smoothly into another, the movement is transitional . eg. Curved lines. Curved lines should not be over done. They are at their best when stiffened by same straight lines, eg: round yoke with vertical pin tucks within it as shown in Fig. (g)

(ii)Radiation: Fig. (h) shows a design is created with radiating lines at the neckline, it will attract attention to the face. These radiating lines are produced by stitching decorative darts on the right side of the garment.

c. Interrelationship of Elements of Design.

Understanding the role of space, shape, and form and developing the skill to analyse line direction helps one learn to predict the effect of each design. Because these design elements combine with color and texture to produce all designs, they are important in all areas of creativity.