Diuretics and Their Mechanisms of Action

A diuretic is a substance that increases the rate of urine volume output, as the name implies. Most diuretics also increase urinary excretion of solutes, especially sodium and chloride.

Diuretics and Their Mechanisms of Action

A diuretic is a substance that increases the rate of urine volume output, as the name implies. Most diuretics also increase urinary excretion of solutes, especially sodium and chloride. In fact, most diuretics that are used clin-ically act by decreasing the rate of sodium reabsorption from the tubules, which causes natriuresis (increased sodium output), which in turn causes diuresis (increased water output). That is, in most cases, increased water output occurs secondary to inhibition of tubular sodium reabsorption, because sodium remaining in the tubules acts osmotically to decrease water reabsorption. Because the renal tubular reabsorption of many solutes, such as potassium, chloride, magnesium, and calcium, is also influenced sec-ondarily by sodium reabsorption, many diuretics raise renal output of these solutes as well. 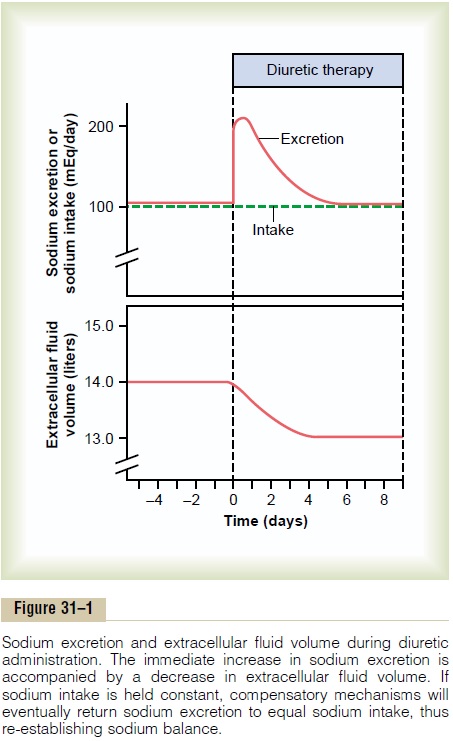 Some diuretics can increase urine output more than 20-fold within a few minutes after they are administered. However, the effect of most diuretics on renal output of salt and water subsides within a few days (Figure 31–1). This is due to activation of other compensatory mechanisms initiated by decreased extracellular fluid volume. For example, a decrease in extracellular fluid volume often reduces arterial pressure and glomerular filtration rate (GFR) and increases renin secretion and angiotensin II formation; all these responses, together, eventually override the chronic effects of the diuretic on urine output. Thus, in the steady state, urine output becomes equal to intake, but only after reductions in arterial pressure and extra-cellular fluid volume have occurred, relieving the hypertension or edema that prompted the use of diuretics in the first place.

Injection into the blood stream of substances that are not easily reabsorbed by the renal tubules, such as urea, mannitol, and sucrose, causes a marked increase in the concentration of osmotically active molecules in the tubules. The osmotic pressure of these solutes then greatly reduces water reabsorption, flushing large amounts of tubular fluid into the urine.

Large volumes of urine are also formed in certain diseases associated with excess solutes that fail to be reabsorbed from the tubular fluid. For example, when the blood glucose concentration rises to high levels in diabetes mellitus, the increased filtered load of glucose into the tubules exceeds their capacity to reabsorb glucose (i.e., exceeds their transport maximum for glucose). Above a plasma glucose con-centration of about 250 mg/dl, little of the extra glucose is reabsorbed by the tubules; instead, the excess glucose remains in the tubules, acts as an osmotic diuretic, and causes rapid loss of fluid into the urine. In patients with diabetes mellitus, the high urine output is balanced by a high level of fluid intake owing to activation of the thirst mechanism.

Furosemide, ethacrynic acid, and bumetanide are power-ful diuretics that decrease active reabsorption in the thick ascending limb of the loop of Henle by blocking the 1-sodium, 2-chloride, 1-potassium co-transporter located in the luminal membrane of the epithelial cells. These diuretics are among the most powerful of the clin-ically used diuretics.

By blocking active sodium-chloride-potassium co-transport in the luminal membrane of the loop of Henle, the loop diuretics raise urine output of sodium, chloride, potassium, and other electrolytes, as well as water, for two reasons: (1) they greatly increase the quantities of solutes delivered to the distal parts of the nephrons, and these act as osmotic agents to prevent water reabsorp-tion as well; and (2) they disrupt the countercurrent multiplier system by decreasing absorption of ions from the loop of Henle into the medullary interstitium, thereby decreasing the osmolarity of the medullary interstitial fluid. Because of this effect, loop diuretics impair the ability of the kidneys to either concentrate or dilute the urine. Urinary dilution is impaired because the inhibition of sodium and chloride reabsorption in the loop of Henle causes more of these ions to be excreted along with increased water excretion. Urinary concentration is impaired because the renal medullary interstitial fluid concentration of these ions, and there-fore renal medullary osmolarity, is reduced. Conse-quently, reabsorption of fluid from the collecting ducts is decreased, so that the maximal concentrating ability of the kidneys is also greatly reduced. In addition, decreased renal medullary interstitial fluid osmolarity reduces absorption of water from the descending loop of Henle. Because of these multiple effects, 20 to 30 per cent of the glomerular filtrate may be delivered into the urine, causing, under acute conditions, urine output to be as great as 25 times normal for at least a few minutes.

The thiazide derivatives, such as chlorothiazide, act mainly on the early distal tubules to block the sodium-chloride co-transporter in the luminal membrane of the tubular cells. Under favorable conditions, these agents cause 5 to 10 per cent of the glomerular filtrate to pass into the urine. This is about the same amount of sodium normally reabsorbed by the distal tubules.

Spironolactone and eplerenone are aldosterone antago-nists that compete with aldosterone for receptor sites in the cortical collecting tubule epithelial cells and, therefore, can decrease the reabsorption of sodium and secretion of potassium in this tubular segment.As a con-sequence, sodium remains in the tubules and acts as an osmotic diuretic, causing increased excretion of water as well as sodium. Because these drugs also block the effect of aldosterone to promote potassium secretion in the tubules, they decrease the excretion of potassium. Aldosterone antagonists also cause movement of potas-sium from the cells to the extracellular fluid. In some instances, this causes extracellular fluid potassium con-centration to increase excessively. For this reason, spironolactone and other aldosterone inhibitors are referred to as potassium-sparing diuretics. Many of the other diuretics cause loss of potassium in the urine, in contrast to the aldosterone antagonists, which “spare” the loss of potassium.

Amiloride and triamterene also inhibit sodium reab-sorption and potassium secretion in the collecting tubules, similar to the effects of spironolactone. However, at the cellular level, these drugs act directly to block the entry of sodium into the sodium channels of the luminal membrane of the collecting tubule epithelial cells. Because of this decreased sodium entry into the epithelial cells, there is also decreased sodium transport across the cells’ basolateral membranes and, therefore, decreased activity of the sodium-potassium-adenosine triphosphatase pump. This decreased activity reduces the transport of potassium into the cells and ultimately decreases the secretion of potassium into the tubular fluid. For this reason, the sodium channel block-ers are also potassium-sparing diuretics and decrease the urinary excretion rate of potassium.