Abnormalities that originate within the kidney and that abruptly diminish urine output fall into the general cat-egory of intrarenal acute renal failure.

Abnormalities that originate within the kidney and that abruptly diminish urine output fall into the general cat-egory of intrarenal acute renal failure. This category of acute renal failure can be further divided into (1) conditions that injure the glomerular capillaries or other small renal vessels, (2) conditions that damage the renal tubular epithelium, and (3) conditions that cause damage to the renal interstitium. This type of classifica-tion refers to the primary site of injury, but because the renal vasculature and tubular system are functionally interdependent, damage to the renal blood vessels can lead to tubular damage, and primary tubular damage can lead to damage of the renal blood vessels. Causes of intrarenal acute renal failure are listed in Table 31–3. 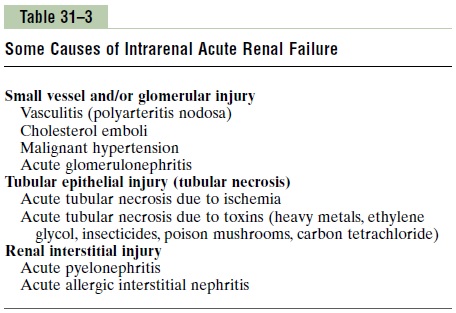 Acute Renal Failure Caused by Glomerulonephritis. Acuteglomerulonephritis is a type of intrarenal acute renal failure usually caused by an abnormal immune reaction that damages the glomeruli. In about 95 per cent of the patients with this disease, damage to the glomeruli occurs 1 to 3 weeks after an infection elsewhere in the body, usually caused by certain types of group A beta streptococci. The infection may have been a streptococ-cal sore throat, streptococcal tonsillitis, or even strepto-coccal infection of the skin. It is not the infection itself that damages the kidneys. Instead, over a few weeks, as antibodies develop against the streptococcal antigen, the antibodies and antigen react with each other to form an insoluble immune complex that becomes entrapped in the glomeruli, especially in the basement membrane portion of the glomeruli.

The acute inflammation of the glomeruli usually sub-sides in about 2 weeks, and in most patients, the kidneys return to almost normal function within the next few weeks to few months. Sometimes, however, many of the glomeruli are destroyed beyond repair, and in a small percentage of patients, progressive renal deterioration continues indefinitely, leading to chronic renal failure.

Acute       Tubular       Necrosis Caused by Severe Renal Ischemia. Severe ischemia of the kidney can result fromcirculatory shock or any other disturbance that severely impairs the blood supply to the kidney. If the ischemia is severe enough to seriously impair the delivery of nutrients and oxygen to the renal tubular epithelial cells, and if the insult is prolonged, damage or eventual destruction of the epithelial cells can occur. When this happens, tubular cells “slough off” and plug many of the nephrons, so that there is no urine output from the blocked nephrons; the affected nephrons often fail to excrete urine even when renal blood flow is restored to normal, as long as the tubules remain plugged. The most common causes of ischemic damage to the tubular epithelium are the prerenal causes of acute renal failure associated with circulatory shock.

Acute Tubular Necrosis Caused by Toxins or Medications.There is a long list of renal poisons and medications that can damage the tubular epithelium and cause acute renal failure. Some of these are carbon tetrachloride, heavymetals (such as mercury and lead), ethylene glycol (whichis a major component in antifreeze), various insecticides, various medications (such as tetracyclines) used as antibiotics, and cis-platinum, which is used in treating certain cancers. Each of these substances has a specific toxic action on the renal tubular epithelial cells, causing death of many of them. As a result, the epithelial cells slough away from the basement membrane and plug the tubules. In some instances, the basement membrane also is destroyed. If the basement membrane remains intact, new tubular epithelial cells can grow along the surface of the membrane, so that the tubule repairs itself within 10 to 20 days.