Many types of vascular lesions can lead to renal ischemia and death of kidney tissue.

Many types of vascular lesions can lead to renal ischemia and death of kidney tissue. The most common of these are (1)atherosclerosis of the larger renal arter-ies, with progressive sclerotic constriction of the vessels; (2) fibromuscular hyperplasia of one or more of the large arteries, which also causes occlusion of the vessels; and (3) nephrosclerosis, caused by sclerotic lesions of the smaller arteries, arterioles, and glomeruli.

Atherosclerotic or hyperplastic lesions of the large arteries frequently affect one kidney more than the other and, therefore, cause unilaterally diminished kidney function. As discussed, hyperten-sion often occurs when the artery of one kidney is constricted while the artery of the other kidney is still normal, a condition analogous to “two-kidney” Goldblatt hypertension.

Benign nephrosclerosis, the most common form ofkidney disease, is seen to at least some extent in about 70 per cent of postmortem examinations in people who die after the age of 60. This type of vascular lesion occurs in the smaller interlobular arteries and in the afferent arterioles of the kidney. It is believed to begin with leakage of plasma through the intimal membrane of these vessels. This causes fibrinoid deposits to develop in the medial layers of these vessels, followed by progressive thickening of the vessel wall that even-tually constricts the vessels and, in some cases, occludes them. Because there is essentially no collateral circula-tion among the smaller renal arteries, occlusion of one or more of them causes destruction of a comparable number of nephrons. Therefore, much of the kidney tissue becomes replaced by small amounts of fibrous tissue. When sclerosis occurs in the glomeruli, the injury is referred to as glomerulosclerosis.

Nephrosclerosis and glomerulosclerosis occur to some extent in most people after the fourth decade of life, causing about a 10 per cent decrease in the number of functional nephrons each 10 years after age 40 (Figure 31–3). This loss of glomeruli and overall nephron function is reflected by a progressive decrease in both renal blood flow and GFR. Even in “normal” people, kidney plasma flow and GFR decrease by 40 to 50 per cent by age 80. 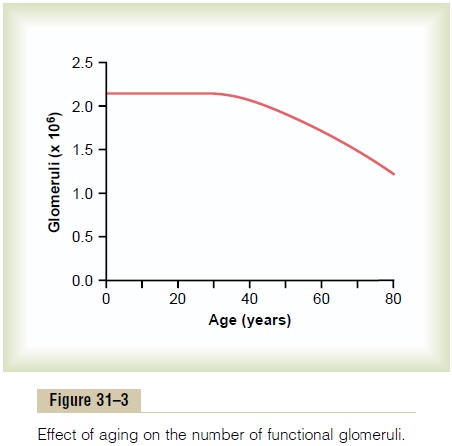