In many cases, an initial insult to the kidney leads to progressive deterioration of kidney function and further loss of nephrons to the point where the person must be placed on dialysis treatment or transplanted with a functional kidney to survive.

In many cases, an initial insult to the kidney leads to progressive deterioration of kidney function and further loss of nephrons to the point where the person must be placed on dialysis treatment or transplanted with a functional kidney to survive. This condition is referred to as end-stage renal disease.

Studies in laboratory animals have shown that sur-gical removal of large portions of the kidney initially causes adaptive changes in the remaining nephrons that lead to increased blood flow, increased GFR, and increased urine output in the surviving nephrons. The exact mechanisms responsible for these changes are not well understood but involve hypertrophy (growth of the various structures of the surviving nephrons) as well as functional changes that decrease vascular resistance and tubular reabsorption in the surviving nephrons. These adaptive changes permit a person to excrete normal amounts of water and solutes even when kidney mass is reduced to 20 to 25 per cent of normal. Over a period of several years, however, the renal functional changes may lead to further injury of the remaining nephrons, particularly to the glomeruli of these nephrons.

The cause of this additional injury is not known, but some investigators believe that it may be related in part to increased pressure or stretch of the remaining glomeruli, which occurs as a result of functional vasodilation or increased blood pressure; the chronic increase in pressure and stretch of the small arterioles and glomeruli are believed to cause sclerosis of these vessels (replacement of normal tissue with connective tissue). These sclerotic lesions can eventually obliter-ate the glomerulus, leading to further reduction in kidney function, further adaptive changes in the remaining nephrons, and a slowly progressing vicious circle that eventually terminates in end-stage renal disease (Figure 31–2). The only proven method of slowing down this progressive loss of kidney func-tion is to lower arterial pressure and glomerular hydrostatic pressure, especially by using drugs such as angiotensin-converting enzyme inhibitors or angiotensin II antagonists. 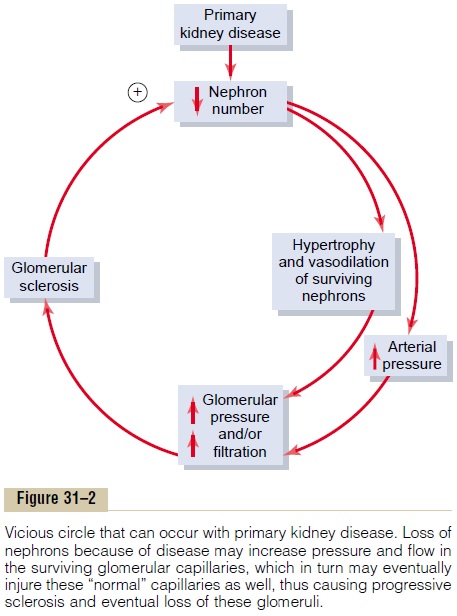 Excessive weight gain (obesity) appears to be the most important risk factor for the two main causes of end-stage renal disease—diabetes and hypertension. As discussed, type II diabetes, which is closely linked to obesity, accounts for approximately 90 per cent of all diabetes mellitus. Excess weight gain is also a major cause of essential hypertension, accounting for as much as 65 to 75 per cent of the risk for developing hypertension in adults. In addition to causing renal injury through diabetes and hyperten-sion, obesity may have additive or synergistic effects to worsen renal function in patients with pre-existing kidney disease