Effects of Renal Failure on the Body Fluids-Uremia

The effect of complete renal failure on the body fluids depends on (1) water and food intake and (2) the degree of impairment of renal function.

Effects of Renal Failure on the Body Fluids—Uremia 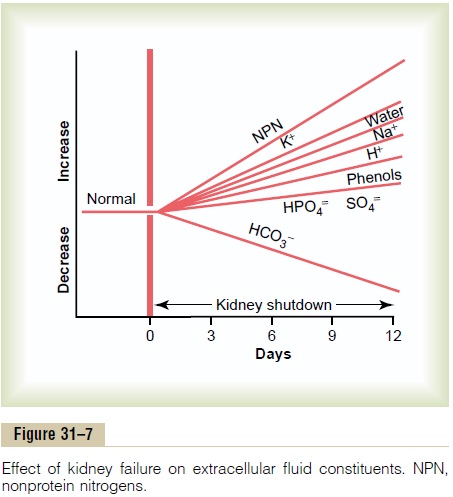 of different substances in the extracellular fluid are approximately those shown in Figure 31–7. Important effects include (1)generalized edema resulting from water and salt retention, (2) acidosis resulting from failure of the kidneys to rid the body of normal acidic products, (3) high concentration of the nonprotein nitro-gens—especially urea, creatinine, and uric acid—result-ing from failure of the body to excrete the metabolic end products of proteins, and (4) high concentrations ofother substances excreted by the kidney, including phenols, sulfates, phosphates, potassium, and guanidine bases. This total condition is called uremia because ofthe high concentration of urea in the body fluids.

Water Retention and Development of Edema in Renal Failure. Ifwater intake is restricted immediately after acute renal failure begins, the total body fluid content may become only slightly increased. If fluid intake is not limited and the patient drinks in response to the normal thirst mech-anisms, the body fluids begin to increase immediately and rapidly.

With chronic partial kidney failure, accumulation of fluid may not be severe, as long as salt and fluid intake are not excessive, until kidney function falls to 25 per cent of normal or lower. The reason for this, as discussed previously, is that the surviving nephrons excrete larger amounts of salt and water. Even the small fluid reten-tion that does occur, along with increased secretion of renin and angiotensin II that usually occurs in ischemic kidney disease, often causes severe hypertension in chronic renal failure. Almost all patients with kidney function so reduced as to require dialysis to preserve life develop hypertension. In most of these patients, severe reduction of salt intake or removal of extracellular fluid by dialysis can control the hypertension. The remaining patients continue to have hypertension even after excess sodium has been removed by dialysis. In this group, removal of the ischemic kidneys usually corrects the hypertension (as long as fluid retention is prevented by dialysis) because it removes the source of excessive renin secretion and subsequent increased angiotensin II formation.

Uremia—IncreaseinUrea and     Other NonproteinNitrogens (Azotemia). The nonprotein nitrogens include urea, uricacid, creatinine, and a few less important compounds. These, in general, are the end products of protein metabolism and must be removed from the body to ensure continued normal protein metabolism in the cells. The concentrations of these, particularly of urea, can rise to as high as 10 times normal during 1 to 2 weeks of total renal failure. With chronic renal failure, the concentrations rise approximately in proportion to the degree of reduction in functional nephrons. For this reason, measuring the concentrations of these sub-stances, especially of urea and creatinine, provides an important means for assessing the degree of renal failure.

Acidosis in Renal Failure. Each day the body normally pro-duces about 50 to 80 millimoles more metabolic acid than metabolic alkali. Therefore, when the kidneys fail to function, acid accumulates in the body fluids. The buffers of the body fluids normally can buffer 500 to 1000 millimoles of acid without lethal increases in extra-cellular fluid hydrogen ion concentration, and the phos-phate compounds in the bones can buffer an additional few thousand millimoles of hydrogen ion. However, when this buffering power is used up, the blood pH falls drastically, and the patient will become comatose and die if the pH falls below about 6.8.

Anemia in Chronic Renal Failure Caused by Decreased Erythro- poietin Secretion. Patients with severe chronic renalfailure almost always develop anemia. The most im-portant cause of this is decreased renal secretion of erythropoietin, which stimulates the bone marrow toproduce red blood cells. If the kidneys are seriously damaged, they are unable to form adequate quantities of erythropoietin, which leads to diminished red blood cell production and consequent anemia.

Osteomalacia in Chronic Renal Failure Caused by Decreased Production of Active Vitamin D and by Phosphate Retention by the Kidneys.Prolonged renal failure also causesosteo-malacia, a condition in which the bones are partiallyabsorbed and, therefore, become greatly weakened. An important cause of this condition is the following: Vitamin D must be converted by a two-stage process, first in the liver and then in the kidneys, into 1,25– dihydroxycholecalciferol before it is able to promote calcium absorption from the intestine. Therefore, serious damage to the kidney greatly reduces the blood concentration of active vitamin D, which in turn decreases intestinal absorption of calcium and the avail-ability of calcium to the bones.

Another important cause of demineralization of the skeleton in chronic renal failure is the rise in serum phosphate concentration that occurs as a result of decreased GFR. This rise in serum phosphate causes increased binding of phosphate with calcium in the plasma, thus decreasing the plasma serum ionized calcium concentration, which in turn stimulates parathy-roid hormone secretion. This secondary hyperparathy-roidism then stimulates the release of calcium from bones, causing further demineralization of the bones.