Loss of Functional Nephrons Requires the Surviving Nephrons to Excrete More Water and Solutes. It would be reasonableto suspect that decreasing the number of functional nephrons, which reduces the GFR, would also cause major decreases in renal excretion of water and solutes.

Loss of Functional Nephrons Requires the Surviving Nephrons to Excrete More Water and Solutes. It would be reasonableto suspect that decreasing the number of functional nephrons, which reduces the GFR, would also cause major decreases in renal excretion of water and solutes. Yet patients who have lost as much as 75 per cent of their nephrons are able to excrete normal amounts of water and electrolytes without serious accumulation of any of these in the body fluids.

In contrast to the electrolytes, many of the waste products of metabolism, such as urea and creatinine, accumulate almost in proportion to the number of nephrons that have been destroyed.The reason for this is that substances such as creatinine and urea depend largely on glomerular filtration for their excretion, and they are not reabsorbed as avidly as the electrolytes.

Creatinine, for example, is not reabsorbed at all, and the excretion rate is equal to the rate at which it is filtered. 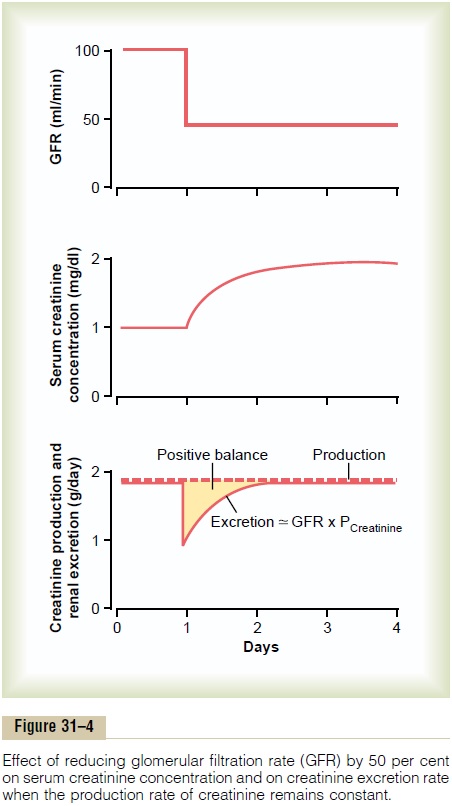 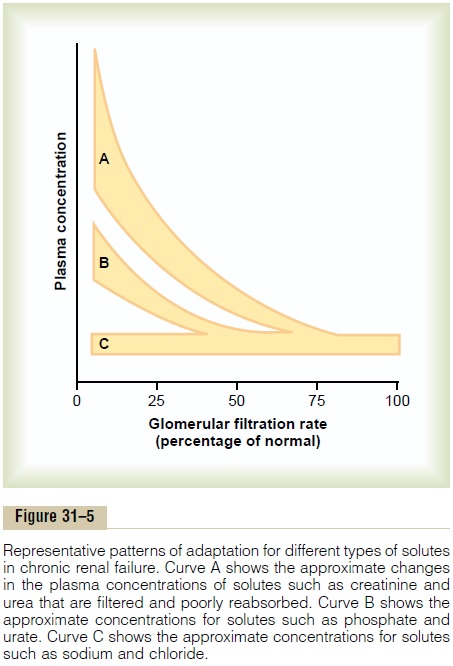 Some solutes, such as phosphate, urate, and hydro-gen ions, are often maintained near the normal range until GFR falls below 20 to 30 per cent of normal. Thereafter, the plasma concentrations of these sub-stances rise, but not in proportion to the fall in GFR, as shown in curve B of Figure 31–5. Maintenance of relatively constant plasma concentrations of these solutes as GFR declines is accomplished by excreting progressively larger fractions of the amounts of these solutes that are filtered at the glomerular capillaries; this occurs by decreasing the rate of tubular reab-sorption or, in some instances, by increasing tubular secretion rates.

In the case of sodium and chloride ions, their plasma concentrations are maintained virtually constant even with severe decreases in GFR (see curve C of Figure 31–5). This is accomplished by greatly de-creasing tubular reabsorption of these electrolytes. For example, with a 75 per cent loss of functional nephrons, each surviving nephron must excrete four times as much sodium and four times as much volume as under normal conditions (Table 31–6).

Part of this adaptation occurs because of increased blood flow and increased GFR in each of the surviv-ing nephrons, owing to hypertrophy of the blood vessels and glomeruli, as well as functional changes that cause the blood vessels to vasodilate. Even with large decreases in the total GFR, normal rates of renal excretion can still be maintained by decreasing the rate at which the tubules reabsorb water and solutes. 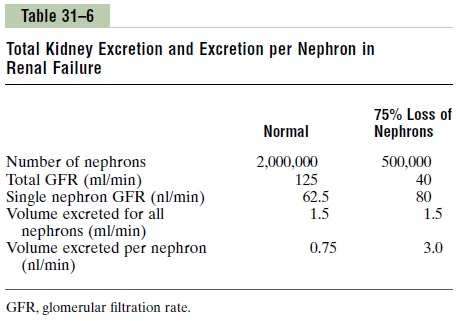 Isosthenuria—Inability of the Kidney to Concentrate or Dilute the Urine. One important effect of the rapid rate oftubular flow that occurs in the remaining nephrons of diseased kidneys is that the renal tubules lose their ability to concentrate or dilute the urine. The concen-trating ability of the kidney is impaired mainly because (1) the rapid flow of tubular fluid through the collect- ing ducts prevents adequate water reabsorption, and (2) the rapid flow through both the loop of Henle and the collecting ducts prevents the countercurrent mech- anism from operating effectively to concentrate the medullary interstitial fluid solutes. Therefore, as pro- gressively more nephrons are destroyed, the maximum concentrating ability of the kidney declines, and urine osmolarity and specific gravity (a measure of the total solute concentration) approach the osmolarity and specific gravity of the glomerular filtrate, as shown in Figure 31–6. 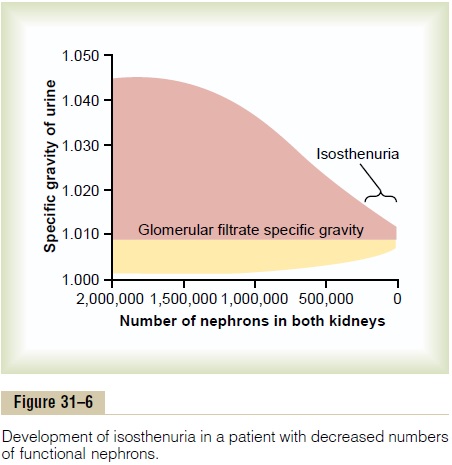 The  diluting  mechanism  in  the  kidney  is  also impaired when the number of nephrons decreases because the rapid flushing of fluid through the loops of Henle and the high load of solutes such as urea cause a relatively high solute concentration in the tubular fluid of this part of the nephron. As a conse- quence, the diluting capacity of the kidney is impaired, and the minimal urine osmolality and specific gravity approach those of the glomerular filtrate. Because the concentrating  mechanism  becomes  impaired  to  a greater extent than does the diluting mechanism in chronic renal failure, an important clinical test of renal function is to determine how well the kidneys can concentrate urine when a person’s water intake is restricted for 12 or more hours.