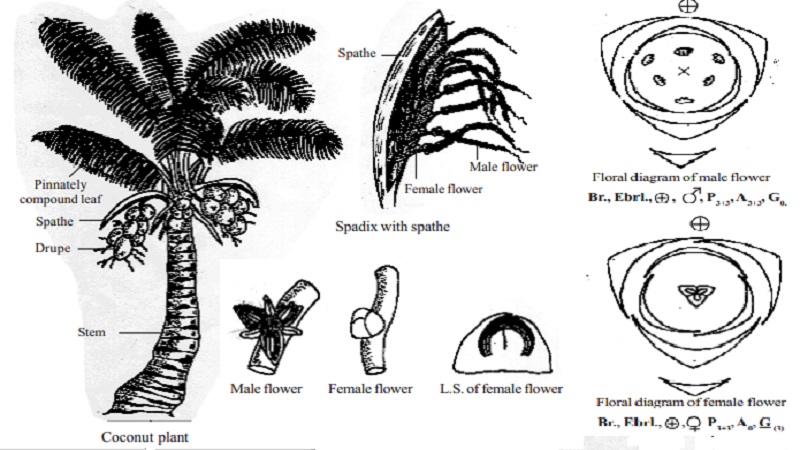 Unbranched tree with arborescent stem and a crown of large leaves. It grows to a height of 60 to 100 feet.

Fibrous and adventitious root system. As the stem increases in diameter, new roots are added at higher levels from the massive basal cushion and the youngest roots are visible above the soil surface.

Tepals 6 arranged in two whorls of three each, persistent and polyphyllous showing valvate aestivation in both the whorls. Inner odd tepal is posterior in position.

Absent but pistillode is present.

Tepals 6 arranged in two whorls of three each, persistent, and polyphyllous showing imbricate aestivation in both the whorls. The inner posterior tepal is completely outside.

Absent but staminodes are present.

With small embryo and abundant endosperm.

The fluid of tender fruit of Cocos nucifera (kalpa vriksha - coconut palm) is sweet and refreshing drink. The boiled young seedlings of Borassus flabellifer (palmyra palm) are edible and its fruits are eaten raw.

A sugary solution obtained by cutting young peduncles of Cocos nucifera, Borassus flabellifer and Phoenix sylvestris (Eechai) is used for manufacturing jaggery. This sugary solution on fermentation yields the beverage called 'toddy'. This sap is also used for manufacturing a number of commercially useful products such as palm sugar, alcohol and vinegar.

Dense stem wood of Borassus flabellifer and Cocos nucifera is used as timber.