Biotin was originally discovered as part of the complex called bios, which promoted the growth of yeast and, separately, as vitamin H, the protective or curative factor in “egg white injury,” the disease caused in humans.

Biotin was originally discovered as part of the complex called bios, which promoted the growth of yeast and, separately, as vitamin H, the protective or curative factor in “egg white injury,” the disease caused in humans and experimental animals being fed diets containing large amounts of uncooked egg white. The structures of biotin, biocytin, and carboxy-biocytin (the active metabolic intermediate) are shown in Figure 8.17.

Biotin is widely distributed in many foods. It is synthesized by intestinal flora, and in balance studies the total output of biotin in urine plus feces is three to six times greater than the intake, reflecting bacterial synthesis. It is not known to what extent this is avail-able to the host. 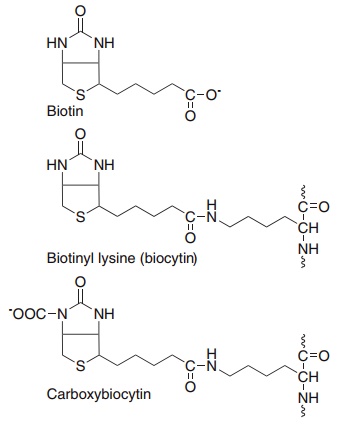 Absorption and metabolism of biotin

Most biotin in foods is present as biocytin (ε-amino-biotinyllysine), which is released on proteolysis, then hydrolyzed by biotinidase in the pancreatic juice and intestinal mucosal secretions, to yield free biotin. The extent to which bound biotin in foods is biologically available is not known.

Free biotin is absorbed from the small intestine by active transport. Biotin circulates in the bloodstream both free and bound to a serum glycoprotein that has biotinidase activity, catalyzing the hydrolysis of biocytin.

Biotin enters tissues by a saturable transport system and is then incorporated into biotin-dependent enzymes as the ε-amino-lysine peptide, biocytin. Unlike other B vitamins, where concentrative uptake into tissues can be achieved by facilitated diffusion followed by metabolic trapping, the incorporation of biotin into enzymes is relatively slow, and cannot be considered part of the uptake process. On catabolism of the enzymes, biocytin is hydrolyzed by biotinidase, permitting reutilization.

Biotin also has a role in the control of the cell cycle, and acts via cell surface receptors to regulate the expression of key enzymes involved in glucose metab-olism. In response to mitogenic stimuli there is a con-siderable increase in the tissue uptake of biotin, much of which is used to biotinylate histones and other nuclear proteins.

Biotin is widely distributed in foods and deficiency is unknown, except among people maintained for many months on total parenteral nutrition, and a very small number of people who eat large amounts of uncooked egg. Avidin, a protein in egg white, binds biotin extremely tightly and renders it unavailable for absorption. Avidin is denatured by cooking and then loses its ability to bind biotin. The amount of avidin in uncooked egg white is relatively small, and prob-lems of biotin deficiency have only occurred in people eating a dozen or more raw eggs a day, for some years.

The few early reports of human biotin deficiency are all of people who consumed large amounts of uncooked eggs. They developed a fine scaly dermatitis and hair loss (alopecia). Histology of the skin showed an absence of sebaceous glands and atrophy of the hair follicles. Provision of biotin supplements of 200–1000 μg/day resulted in cure of the skin lesions and regrowth of hair, despite continuing the abnormal diet providing large amounts of avidin. There have been no studies of providing modest doses of biotin to such patients, and none in which their high intake of uncooked eggs was not either replaced by an equivalent intake of cooked eggs (in which avidin has been denatured by heat, and the yolks of which are a good source of biotin) or continued unchanged, so there is no information from these case reports of the amounts of biotin required for normal health. More recently, similar signs of biotin deficiency have been observed in patients receiving total parenteral nutrition for pro-longed periods after major resection of the gut. The signs resolve following the provision of biotin, but again there have been no studies of the amounts of biotin required; intakes have ranged between 60 μg/ day and 200 μg/day.

Rather than the expected hypoglycemia, biotin deficiency may sometimes be associated with hyper-glycemia as a result of the reduced synthesis of gluco-kinase. Glucokinase is the high Km isoenzyme of hexokinase that is responsible for uptake of glucose into the liver for glycogen synthesis when blood con-centrations are high. It also acts as the sensor for hyperglycemia in the β-islet cells of the pancreas; metabolism of the increased glucose 6-phosphate formed by glucokinase leads to the secretion of insulin. There is some evidence that biotin supple-ments can improve glucose tolerance in diabetes.

The skin lesions of biotin deficiency are similar to those seen in deficiency of essential fatty acids, and serum linoleic acid is lower than normal in biotin-deficient patients owing to impairment of the elongation of PUFAs as a result of reduced activity of acetyl-CoA carboxylase.

The impairment of lipogenesis also affects the tissue fatty acid composition, with an increase in the proportion of palmitoleic acid, mainly at the expense of stearic acid, apparently as a result of increased fatty acid desaturase activity in biotin deficiency. Although dietary protein and fat intake also affect tissue fatty acid composition, the ratio of palmitoleic to stearic acid may provide a useful index of biotin nutritional status in some circumstances.

Biotin deficiency also results in an increase in the normally small amounts of odd-chain fatty acids (mainly C15:0 and C17:0) in triacylglycerols, phos-pholipids, and cholesterol esters. This is a result of impaired activity of propionyl-CoA carboxylase, leading to an accumulation of propionyl-CoA, which can be incorporated into lipids in competition with acetyl-CoA.

Safe and adequate levels of intake

There is no evidence on which to estimate require-ments for biotin. Average intakes are between 10 μg/ day and 200 μg/day. Since dietary deficiency does not occur, such intakes are obviously more than adequate to meet requirements.