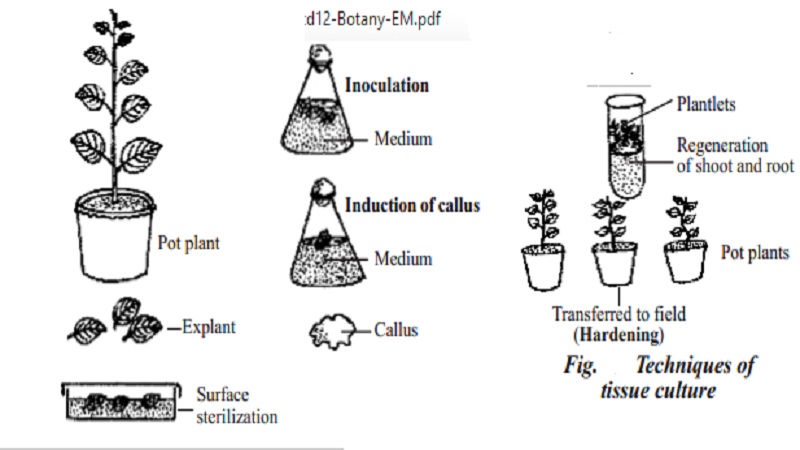 The important media used for all purpose experiment are Murashige and Skoog medium (MS medium), Gamborg medium (B5 medium), White medium (W medium) and Nitsch medium. The culture medium is closed with cotton plug/ or aluminium foil sheet. The pH of the medium is adjusted to 5.8 (acidic range).

By treating the inoculum in any one of the chemical sterilizant such as Sodium hypochlorite, Calcium hypochlorite, Mercury chloride for 15 to 20 minutes followed by repeated washing in sterile water upto 3 to 5 times.

Transfer of explant (root, stem, leaf, etc.) on to a culture medium is called inoculation. The inoculation is carried out under aseptic condition for which an apparatus called laminar air flow chamber is used. Flamed and cooled forceps are used for transfer of plant materials to different culture media kept in glasswares.

The culture medium with the inoculum is incubated at 26 - 2oC with the light intensity at 2000 to 4000 lux (unit of intensity of light) and allowing photoperiod of 16 hour of light and 8 hours of darkness.

Due to activity of auxins and cytokinins, the explant is induced to form callus. The callus is an unorganized mass of undifferentiated tissue. The mechanism of callus formation is that auxin induce cell elongation and cytokinin induces cell division as a result of which masses of cells are formed.

Formation of new organs from the callus under the influence of auxin and cytokinin is called morphogenesis. Roots and shoots are differentiated from the callus. Such embryos are called somatic embryos result in the formation of young plantlet.

There are two types of morphogenesis

Formation of new organs such as shoot and root is known as organogenesis. The development of shoot from the callus is called caulogenesis and formation of root is called rhizogenesis respectively.

Formation of embryos (ie. bipolar structure having shoot and root) from the callus is called embryogenesis. These embryos arise from somatic callus tissue and are called somatic embryos or embryoids or somaclonal embryos.

Exposing the plantlets to the natural environment in a stepwise manner is known as hardening. Finally the plantlets are gradually transferred to the soil.

India is reported to have one of the largest groups of tissue culture scientists in the world. Most of the research is directed towards the development of improved plants for agriculture, horticulture and forestry using tissue culture methods.

The Department of Biotechnology (DBT), Government of India, New Delhi is playing a vital role in promoting research in the area of plant tissue culture. Several laboratories are being supported by providing funds for development of tissue culture technology for the improvement of crop plants.

The important Biotechnology centres are