Arteriosclerosis is the most common disease of the arteries; theterm means hardening of the arteries. It is a diffuse process whereby the muscle fibers and the endothelial lining of the walls of smallarteries and arterioles become thickened. Atherosclerosis involves a different process, affecting the intima of the large and medium-sized arteries. These changes consist of the accumulation of lipids, calcium, blood components, carbohydrates, and fibrous tissue on the intimal layer of the artery. These accumulations are referred to as atheromas or plaques.

Although the pathologic processes of arteriosclerosis and ath-erosclerosis differ, rarely does one occur without the other, and the terms are often used interchangeably. Because atherosclerosis is a generalized disease of the arteries, when it is present in the ex-tremities, atherosclerosis is usually present elsewhere in the body.

The most common direct results of atherosclerosis in arteries in-clude narrowing (stenosis) of the lumen, obstruction by throm-bosis, aneurysm, ulceration, and rupture. Its indirect results are malnutrition and the subsequent fibrosis of the organs that the sclerotic arteries supply with blood. All actively functioning tis-sue cells require an abundant supply of nutrients and oxygen and are sensitive to any reduction in the supply of these nutrients. If such reductions are severe and permanent, the cells undergo is-chemic necrosis (death of cells due to deficient blood flow) and are replaced by fibrous tissue, which requires much less blood flow.

Atherosclerosis can develop at any point in the body, but cer-tain sites are more vulnerable, typically bifurcation or branch areas. In the proximal lower extremity, these include the distal ab-dominal aorta, the common iliac arteries, the orifice of the super-ficial femoral and profunda femoris arteries, and the superficial femoral artery in the adductor canal. Distal to the knee, athero-sclerosis occurs anywhere along the artery. There are no specific areas, such as arterial bifurcations, that are more vulnerable for atherosclerosis.

Although many theories exist about the development of ath-erosclerosis, no single theory fully explains the pathogenesis; however, parts of several theories have been combined into the reaction-to-injury theory. According to this theory, vascular en-dothelial cell injury results from prolonged hemodynamic forces, such as shearing stresses and turbulent flow, irradiation, chemi-cal exposure, or chronic hyperlipidemia in the arterial system. In-jury to the endothelium increases the aggregation of platelets and monocytes at the site of the injury. Smooth muscle cells migrate and proliferate, allowing a matrix of collagen and elastic fibers to form. It may be that there is no single cause or mechanism for the development of atherosclerosis; rather, multiple processes may be involved (Moore, 2002).

Morphologically, atherosclerotic lesions are of two types: fatty streaks and fibrous plaque. Fatty streaks are yellow and smooth, protrude slightly into the lumen of the artery, and are composed of lipids and elongated smooth muscle cells. These lesions have been found in the arteries of people of all age groups, including infants. It is not clear whether fatty streaks predispose the person to the formation of fibrous plaques or if they are reversible. They do not usually cause clinical symptoms.

The fibrous plaque characteristic of atherosclerosis is composed of smooth muscle cells, collagen fibers, plasma components, and lipids. It is white to whitish yellow and protrudes in various de-grees into the arterial lumen, sometimes completely obstructing it. These plaques are found predominantly in the abdominal aorta and the coronary, popliteal, and internal carotid arteries. This plaque is believed to be an irreversible lesion (Fig. 31-6). Gradual narrowing of the arterial lumen as the disease process progresses stimulates the development of collateral circulation 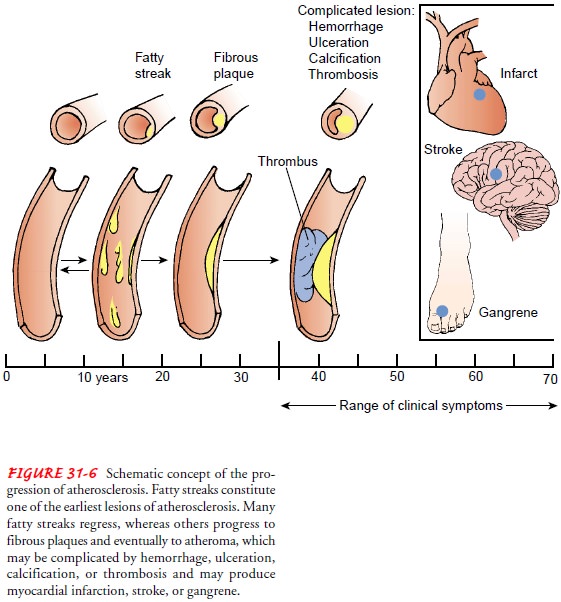 (Fig. 31-7). Collateral circulation consists of preexisting vessels that enlarge to reroute blood flow in the presence of a hemody-namically significant stenosis or occlusion. Collateral flow allows continued perfusion to the tissues beyond the arterial obstruction, but it is often inadequate to meet imposed metabolic demand, and ischemia results. 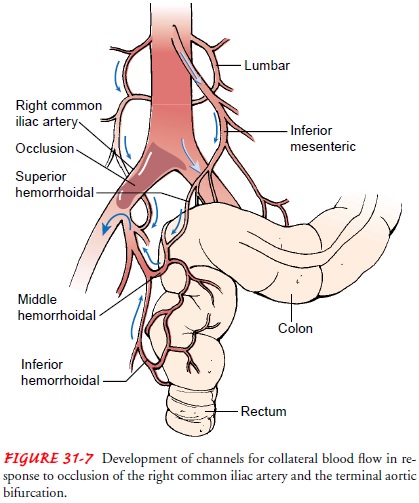 Many risk factors are associated with atherosclerosis (Chart 31-2). Although it is not completely clear whether modification of these risk factors prevents the development of cardiovascular disease, evidence indicates that it may slow the disease process. Some risk factors, such as age or gender, cannot be modified. However, it is believed that genetic factors can be modified indirectly by alter-ing other risk factors (Moore, 2002). 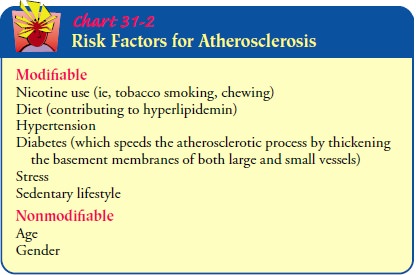 Tobacco use may be one of the strongest risk factors in the de-velopment of atherosclerotic lesions. Nicotine decreases blood flow to the extremities and increases heart rate and blood pressure by stimulating the sympathetic nervous system, causing vasocon-striction. It also increases the risk for clot formation by increasing the aggregation of platelets. Carbon monoxide, a toxin produced by burning tobacco, combines more readily with the hemoglobin than oxygen does, depriving the tissues of oxygen. The amount of tobacco use is directly related to the extent of the disease, and cessation of tobacco use reduces the risks. Many other factors such as obesity, stress, and lack of exercise have been identified as contributing to the disease process.

Intermittent claudication is a sign of generalized atherosclerosis and may be a marker of occult coronary artery disease. Because a high-fat diet is suspected of contributing to atherosclerosis, it is reasonable to measure serum cholesterol and to begin prevention efforts. The American Heart Association recommends reducing the amount of fat ingested in a healthy diet, substituting unsatu-rated fats for saturated fats, and decreasing cholesterol intake to no more than 300 mg daily to reduce the risk of cardiovascular disease (Krauss et al., 2000).

The clinical signs and symptoms resulting from atherosclerosis depend on the organ or tissue affected.

The traditional medical management of atherosclerosis involves modification of risk factors, a controlled exercise program to improve circulation and increase the functioning capacity of the circulation, medication, and interventional or surgical graft procedures.

Several interventional radiologic techniques are important ad-junctive therapies to surgical procedures. If an isolated lesion or lesions are identified during the arteriogram, angioplasty, also called percutaneous transluminal angioplasty (PTA), may be per-formed. After the patient receives a local anesthetic, a balloon-tipped catheter is maneuvered across the area of stenosis. Exactly how PTA works is controversial. Some theorize that it improves blood flow by overstretching (and thereby dilating) the elastic fibers of the nondiseased arterial segment, but most clinicians be-lieve that the procedure widens the arterial lumen by cracking and flattening the plaque against the vessel wall . Com-plications from PTA include hematoma formation, embolus, dissection (separation of the intima) of the vessel, and bleeding.To decrease the risk of reocclusion, stents (small, mesh tubes made of nitinol, titanium, or stainless steel) may be inserted to support the walls of blood vessels and prevent collapse immedi-ately after balloon inflation (Fig. 31-8). A variety of covered wall stents and stent-grafts may be used for short-segment stenoses. Complications associated with stent or stent-graft use include dis-tal embolization, intimal damage (dissection), and dislodgment. The advantage of angioplasty, stents, and stent-grafts is the de-creased length of hospital stay required for the treatment; many of the procedures are performed on an outpatient basis.