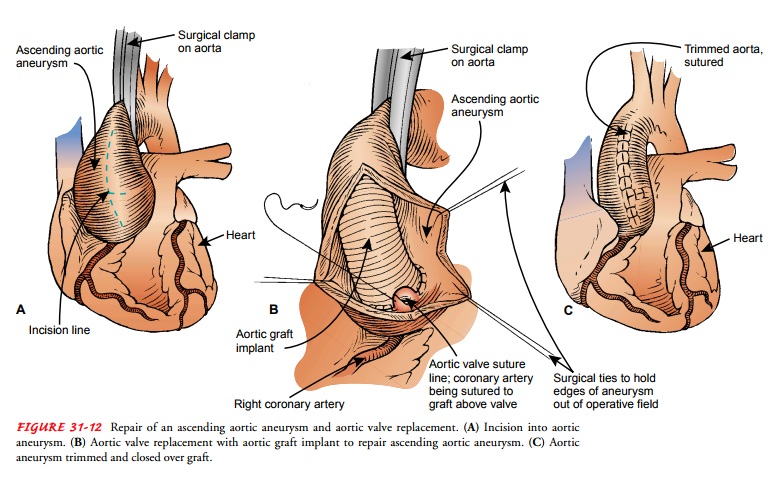 An aneurysm is a localized sac or dilation formed at a weak point in the wall of the aorta.

An aneurysm is a localized sac or dilation formed at a weak point in the wall of the aorta (Fig. 31-11). It may be classified by its shape or form. The most common forms of aneurysms are sac-cular or fusiform. A saccular aneurysm projects from one side of the vessel only. If an entire arterial segment becomes dilated, a fusiform aneurysm develops. Very small aneurysms due to local-ized infection are called mycotic aneurysms.

Historically, the cause of abdominal aortic aneurysm, the most common type of degenerative aneurysm, has been attributed to atherosclerotic changes in the aorta. Other causes of aneurysm formation are listed in Chart 31-5. Aneurysms are serious because they can rupture, leading to hemorrhage and death. 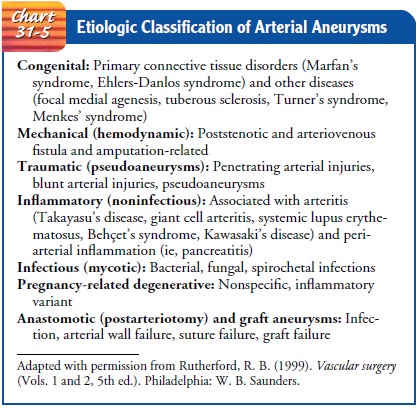 Approximately 85% of all cases of thoracic aortic aneurysm are caused by atherosclerosis. They occur most frequently in men between the ages 40 and 70 years. The thoracic area is the most common site for a dissecting aneurysm. About one third of pa-tients with thoracic aneurysms die of rupture of the aneurysm (Rutherford, 1999).

Symptoms are variable and depend on how rapidly the aneurysm dilates and how the pulsating mass affects surrounding intratho-racic structures. Some patients are asymptomatic. In most cases, pain is the most prominent symptom. The pain is usually con-stant and boring but may occur only when the person is supine.

Other conspicuous symptoms are dyspnea, the result of pressure of the sac against the trachea, a main bronchus, or the lung itself; cough, frequently paroxysmal and with a brassy quality; hoarseness, stridor, or weakness or complete loss of the voice (aphonia), re-sulting from pressure against the left recurrent laryngeal nerve; and dysphagia (difficulty in swallowing) due to impingement on the esophagus by the aneurysm.

When large veins in the chest are compressed by the aneurysm, the superficial veins of the chest, neck, or arms become dilated, and edematous areas on the chest wall and cyanosis are often evident. Pressure against the cervical sympathetic chain can result in unequal pupils. Diagnosis of a thoracic aortic aneurysm is prin-cipally made by chest x-ray, transesophageal echocardiography, and CT.

In most cases, an aneurysm is treated by surgical repair. General measures such as controlling blood pressure and correcting risk factors may be helpful. It is important to control blood pressure in patients with dissecting aneurysms. Systolic pressure is main-tained at about 100 to 120 mm Hg with antihypertensive med-ications (eg, hydralazine hydrochloride [Hydralazine], esmolol hydrochloride [Brevibloc] or another beta-blocker such as atenolol [Tenormin] or timolol maleate [Timoptic]). Pulsatile flow is re-duced by medications that reduce cardiac contractility (eg, propranolol [Inderal]). The goal of surgery is to repair the aneurysm and restore vascular continuity with a vascular graft (Fig. 31-12). Intensive monitoring is usually required after this type of surgery, and the patient is cared for in the critical care unit. Repair of thoracic aneurysms using endovascular grafts implanted (de-ployed) percutaneously in an interventional laboratory (eg, cardiac catheterization laboratory) may decrease postoperative recovery time and decrease complications compared with traditional sur-gical techniques. 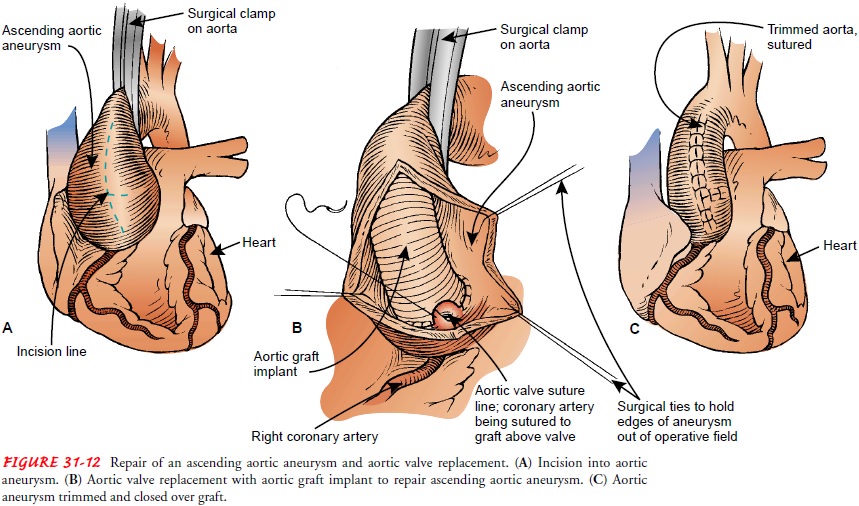 The most common cause of abdominal aortic aneurysm is athero-sclerosis. The condition, which is more common among Cau-casians, affects men four times more often than women and is most prevalent in elderly patients (Rutherford, 1999). Most of these aneurysms occur below the renal arteries (infrarenal aneurysms). Untreated, the eventual outcome may be rupture and death.

All aneurysms involve a damaged media layer of the vessel. This may be caused by congenital weakness, trauma, or disease. After an aneurysm develops, it tends to enlarge. Risk factors include ge-netic predisposition, smoking (or other tobacco use), and hyper-tension; more than one half of patients with aneurysms have hypertension.

About two fifths of patients with abdominal aortic aneurysms have symptoms; the remainder do not. Some patients complain that they can feel their heart beating in their abdomen when lying down, or they may say they feel an abdominal mass or abdomi-nal throbbing. If the abdominal aortic aneurysm is associated with thrombus, a major vessel may be occluded or smaller distal occlusions may result from emboli. A small cholesterol, platelet, or fibrin emboli may lodge in the interosseous or digital arteries, causing blue toes.

The most important diagnostic indication of an abdominal aortic aneurysm is a pulsatile mass in the middle and upper abdomen. About 80% of these aneurysms can be palpated. A systolic bruit may be heard over the mass. Duplex ultrasonography or CT is used to determine the size, length, and location of the aneurysm (Fig. 31-13). When the aneurysm is small, ultrasonography is conducted at 6-month intervals until the aneurysm reaches a size at which surgery to prevent rupture is of more benefit than the possible complications of a surgical procedure. Some aneurysms remain stable over many years of observation. 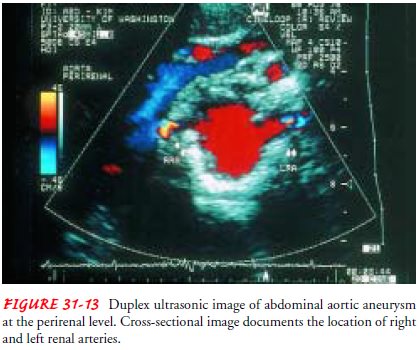 Most abdominal aneurysms occur in patients between the ages of 60 and 90 years. Rupture is likely with coexisting hypertension and with aneurysms wider than 6 cm. In most cases at this point, the chances of rupture are greater than the chance of death during surgical repair. If the elderly patient is considered at moderate risk for complications related to surgery or anesthesia, the aneurysm is not repaired until it is at least 5 cm (2 inches) wide.

The standard treatment for abdominal aortic aneurysm repair has been open surgical repair of the aneurysm by resecting the vessel and sewing a bypass graft in place. The mortality rate associated with elective aneurysm repair, a major surgical procedure, is re-ported to be 1% to 4%. The prognosis for a patient with a rup-tured aneurysm is poor, and surgery is performed immediately (Rutherford, 1999).

An alternative for treating an infrarenal abdominal aortic aneu-rysm is endovascular grafting. Endovascular grafting involves the transluminal placement and attachment of a sutureless aortic graft prosthesis across an aneurysm (Fig. 31-14). This procedure can be performed under local or regional anesthesia. Endovascular graft-ing of abdominal aortic aneurysms may be performed if the patientâ€™s abdominal aorta and iliac arteries are not extremely tor-tuous and if the aneurysm does not begin at the level of the renal arteries. Clinical trials are evaluating endograft treatment of ab-dominal aortic aneurysms at or above the level of the renal arteries and the thoracic aorta. Potential complications include bleeding, hematoma, or wound infection at the femoral insertion site; distal ischemia or embolization; dissection or perforation of the aorta; graft thrombosis; graft infection; break of the attachment system; graft migration; proximal or distal graft leaks; delayed rupture; and bowel ischemia.

Before surgery, nursing assessment is guided by anticipating a rupture and by recognizing that the patient may have cardiovas-cular, cerebral, pulmonary, and renal impairment from athero-sclerosis. The functional capacity of all organ systems should be assessed. Medical therapies designed to stabilize physiologic func-tion should be promptly implemented.

Signs of impending rupture include severe back pain or ab-dominal pain, which may be persistent or intermittent and is oftenlocalized in the middle or lower abdomen to the left of the midline. Low back pain may also be present because of pressure of the aneurysm on the lumbar nerves. This is a serious symptom, usually indicating that the aneurysm is expanding rapidly and is about to rupture. Indications of a rupturing abdominal aortic aneurysm in-clude constant, intense back pain; falling blood pressure; and de-creasing hematocrit. Rupture into the peritoneal cavity is rapidly fatal. A retroperitoneal rupture of an aneurysm may result in hematomas in the scrotum, perineum, flank, or penis. Signs of heart failure or a loud bruit may suggest a rupture into the vena cava. Rupture into the vena cava results in the higher-pressure ar-terial blood entering the lower-pressure venous system and causing turbulence, which is heard as a bruit. The high blood pressure and increased blood volume returning to the right heart from the vena cava may cause the right heart to fail. The overall surgical mortal-ity rate associated with a ruptured aneurysm is 50% to 75%.