11. What is the name of the process given below? Write its 4 types.

12. How will you avoid the growing of microbes in nutrient medium during culture process? What are the techniques used to remove the microbes?

Answer: Sterilization is the technique employed to getrid of microbes such as bacteria and fungi in the culture medium, vessels and explants.

(i) Maintenance of Aseptic Environment : During in vitro tissue culture maintenance of aseptic environmental condition should be followed, i.e., sterilization of glassware, forceps, scalpels, and all accessories in wet steam sterilization by autoclaving at 15 psi (121°C) for 15 to 30 minutes or dipping in 70% ethanol followed by flaming and cooling.

(a) Culture media are dispensed in glass containers, plugged with non-absorbent cotton or sealed with plastic closures and then sterilized using autoclave at 15 psi (121°C) for 15 to 30 minutes.

(b) The plant extracts, vitamins, amino acids and hormones are sterilized by passing through Millipore filter with 0.2 mm pore diameter and then added to sterilized culture medium inside Laminar Airflow Chamber under sterile condition.

(i) The growing of cells including the culture of single cells or small aggregates of cells in vitro in liquid medium is known as cell suspension culture.

(ii) The cell suspension is prepared by transferring a portion of callus to the liquid medium and agitated using rotary shaker instrument.

(iii) The cells are separated from the callus tissue and used for cell suspension culture.

(i) Cell suspension culture can be useful for the production of secondary metabolites like alkaloids, flavonoids, terpenoids, phenolic compounds and recombinant proteins.

(ii) Secondary metabolites are chemical compounds that are not required by the plant for normal growth and development but are produced in the plant as ‘byproducts’ of cell metabolism.

(iii) The process of production of secondary metabolites can be scaled up and automated using bio-reactors for commercial production.

(iv) Many strategies such as biotransformation, elicitation and immobilization have been used to make cell suspension cultures more efficient in the production of secondary metabolites.

14. What do you mean Embryoids? Write its application.

Answer: Somatic embryogenesis is the formation of embryos from the callus tissue directly and these embryos are called Embryoids or from the in vitro cells directly form pre-embryonic cells which differentiate into embryoids.

(i) Somatic embryogenesis provides potential plantlets which after hardening period can establish into plants.

(ii) Somatic embryoids can be be used for the production of synthetic seeds.

(iii) Somatic embryogenesis is now reported in many plants such as Allium sativum, Hordeum vulgare etc and this possible in any plant.

15. Give the examples for micro propagation performed plants .

Answer: Micropropagation of plants at industrial level maintains high standards of homogeneity in plants like pineapple, banana, strawberry and potato.

The property of live plant cells that they have the genetic potential when cultured in nutrient medium to give rise to a complete individual plant.

The process of biochemical and structural changes by which cells become specialized in form and function. 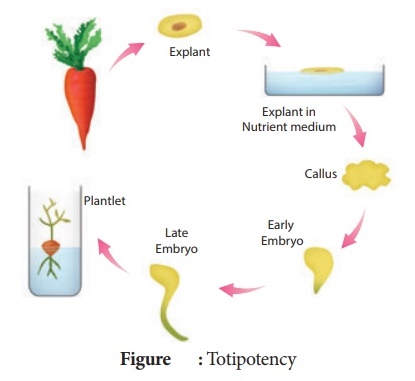 The further differentiation of already differentiated cell into another type of cell. For example, when the component cells of callus have the ability to form a whole plant in a nutrient medium, the phenomenon is called redifferentiation.

17. Based on the material used, how will you classify the culture technology? Explain it.

Answer: Based on the explants some other plant tissue culture types are

The culture of embryos, anthers, ovaries, roots, shoots or other organs of plants on culture media.

The culture of any plant meristematic tissue on culture media.

Protoplasts are cells without a cell wall, but bounded by a cell membrane or plasma membrane. Using protoplasts, it is possible to regenerate whole plants from single cells and also develop somatic hybrids.

(i) Cryopreservation, also known as cryo-conservation, is a process by which protoplasts, cells, tissues, organelles, organs, extracellular matrix, enzymes or any other biological materials are subjected to preservation by cooling to very low temperature of -196°C using liquid nitrogen.

(ii) At this extreme low temperature any enzymatic or chemical activity of the biological material will be totally stopped and this leads to preservation of material in dormant status.

(iii) Later these materials can be activated by bringing to room temperature slowly for any experimental work.

(iv) Protective agents like dimethyl sulphoxide, glycerol or sucrose are added before cryopreservation process. These protective agents are called cryoprotectants, since they protect the cells, or tissues from the stress of freezing temperature.

19. What do you know about Germplasm conservation. Describe it.

(i) Germplasm conservation refers to the conservation of living genetic resources like pollen, seeds or tissue of plant material maintained for the purpose of selective plant breeding, preservation in live condition and used for many research works.

(ii) Germplasm conservation resources is a part of collection of seeds and pollen that are stored in seed or pollen banks, so as to maintain their viability and fertility for any later use such as hybridization and crop improvement.

(iii) Germplasm conservation may also involve a gene bank, DNA bank of elite breeding lines of plant resources for the maintenance of biological diversity and also for food security. 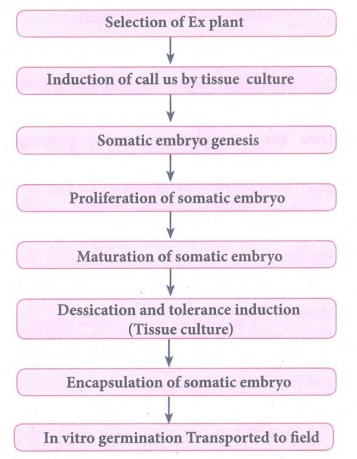 Induction of call us by tissue culture

In vitro germination Transported to field