Resistor, inductor and capacitor in series

Let an alternating source of emf be connected across a resistor of resistance R.

The instantaneous value of the applied emf is 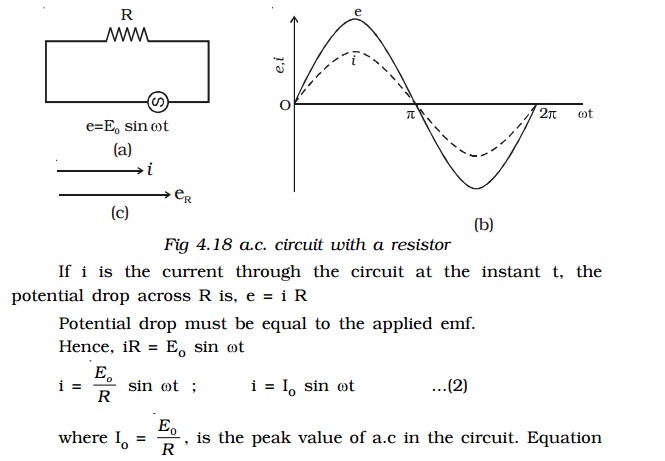 (2) gives the instantaneous value of current in the circuit containing R. From the expressions of voltage and current given by equations (1) and

(2) it is evident that in a resistive circuit, the applied voltage and current are in phase with each other (Fig 4.18b).

Fig 4.18c is the phasor diagram representing the phase relationship between the current and the voltage.

AC Circuit with an inductor

Let an alternating source of emf be applied to a pure inductor of inductance L. The inductor has a negligible resistance and is wound on a laminated iron core. Due to an alternating emf that is applied to the inductive coil, a self induced emf is generated which opposes the applied voltage. (eg) Choke coil. 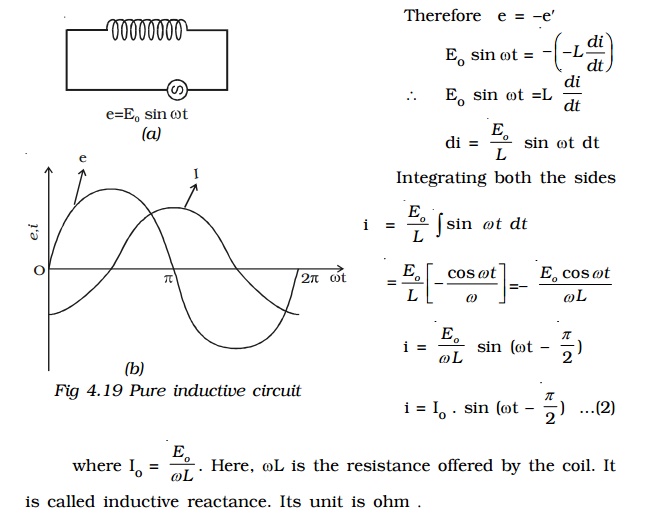 From equations (1) and (2) it is clear that in an a.c. circuit containing a pure inductor the current i lags behind the voltage e by the phase angle of π/2.

Conversely the voltage across L leads the current by the phase angle of π/2. This fact is presented graphically in Fig 4.19b. 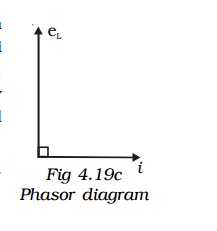 Thus a pure inductor offers zero resistance to d.c. But in an a.c. circuit the reactance of the coil increases with increase in frequency.

AC Circuit with a capacitor

An alternating source of emf is connected across a capacitor of capacitance C (Fig 4.20a). It is charged first in one direction and then in the other direction. 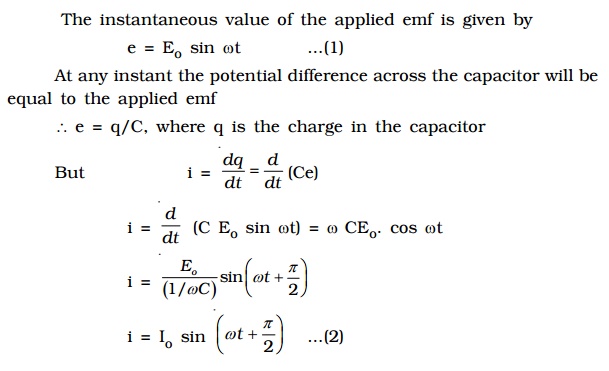 Resistor, inductor and capacitor in series

Let an alternating source of emf e be connected to a series combination of a resistor of resistance R, inductor of inductance L and a capacitor of capacitance C (Fig 4.21a).

Let the current flowing through the circuit be I.

The voltage across the capacitor is, VC = IXC (VC lags behind I by π/2)

The voltages across the different components are represented in the voltage phasor diagram (Fig. 4.21b).

VL and VC are 180o out of phase with each other and the resultant of VL and VC is (VL – VC), assuming the circuit to be predominantly inductive. The applied voltage ‘V’ equals the vector sum of VR, VL and VC. 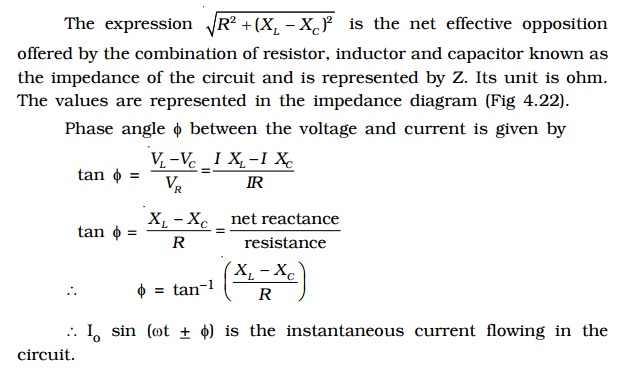 The series resonant circuit is often called an ‘acceptor’ circuit. By offering minimum impedance to current at the resonant frequency it is able to select or accept most readily this particular frequency among many frequencies.

The selectivity or sharpness of a resonant circuit is measured by the quality factor or Q factor. In other words it refers to the sharpness of tuning at resonance.

The Q factor of a series resonant circuit is defined as the ratio of the voltage across a coil or capacitor to the applied voltage.

where ωo is the angular frequency of the a.c. at resonance. 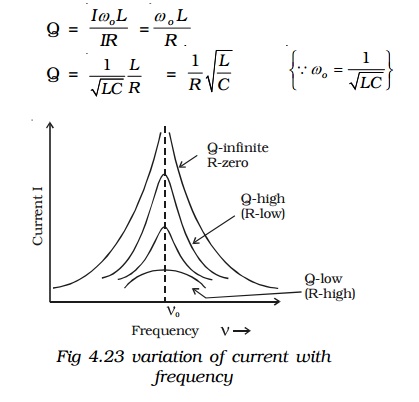 Q is just a number having values between 10 to 100 for normal frequencies. Circuit with high Q values would respond to a very narrow frequency range and vice versa. Thus a circuit with a high Q value is sharply tuned while one with a low Q has a flat resonance. Q-factor can be increased by having a coil of large inductance but of small ohmic resistance.

Current frequency curve is quite flat for large values of resistance and becomes more sharp as the value of resistance decreases. The curve shown in Fig 4.23 is also called the frequency response curve.

Power in an ac circuit

In an a.c circuit the current and emf vary continuously with time. Therefore power at a given instant of time is calculated and then its mean is taken over a complete cycle. Thus, we define instantaneous power of an a.c. circuit as the product of the instantaneous emf and the instantaneous current flowing through it.

The instantaneous value of emf and current is given by

where φ is the phase difference between the emf and current in an a.c circuit

The average power consumed over one complete cycle is 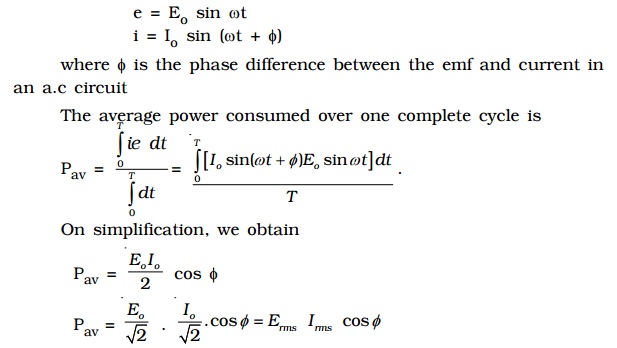 where Apparent power = Erms Irms and power factor = cos φ

The average power of an ac circuit is also called the true power of the circuit.