Lenz’s law - a consequence of conservation of energy

Copper coils are wound on a cylindrical cardboard and the two ends of the coil are connected to a sensitive galvanometer. A magnet is moved towards the coil (Fig 4.4). The upper face of the coil acquires north polarity. 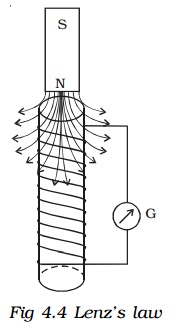 Consequently work has to be done to move the magnet further against the force of repulsion. When we withdraw the magnet away from the coil, its upper face acquires south polarity. Now the workdone is against the force of attraction. When the magnet is moved, the number of magnetic lines of force linking the coil changes, which causes an induced current to flow through the coil. The direction of the induced current, according to Lenz’s law is always to oppose the motion of the magnet. The workdone in moving the magnet is converted into electrical energy. This energy is dissipated as heat energy in the coil. If on the contrary, the direction of the current were to help the motion of the magnet, it would start moving faster increasing the change of magnetic flux linking the coil. This results in the increase of induced current. Hence kinetic energy and electrical energy would be produced without any external work being done, but this is impossible. Therefore, the induced current always flows in such a direction to oppose the cause. Thus it is proved that Lenz’s law is the consequence of conservation of energy.