In a conductor, the free electrons are always at random motion making collisions with ions or atoms of the conductor.

In a conductor, the free electrons are always at random motion making collisions with ions or atoms of the conductor. When a voltage V is applied between the ends of the conductor, resulting in the flow of current I, the free electrons are accelerated. Hence the electrons gain energy at the rate of VI per second. The lattice ions or atoms receive this energy VI from the colliding electrons in random bursts. This increase in energy is nothing but the thermal energy of the lattice. Thus for a steady current I, the amount of heat produced in time t is

Joule’s law is verified using Joule’s calorimeter. It consists of a resistance coil R enclosed inside a copper calorimeter (Fig 3.1). 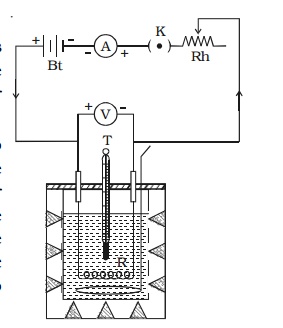 A battery (Bt), a key (K), a rheostat (Rh) and an ammeter (A) are connected in series with the calorimeter. A voltmeter (V) is connected across the ends of the coil R.

(i) Law of current

The initial temperature of water is measured as θ1. Let W be the heat capacity of the calorimeter and contents. Now a current of I1 is passed for a time of t (about 20 minutes). The final temperature (θ2) (after applying necessary correction) is noted. The quantity of heat gained by calorimeter and the contents is calculated as H1 = W (θ 2−θ1). Water is then cooled to θ1. The experiment is repeated by passing currents I2, I3 . . etc., through the same coil for the same interval of time t and the corresponding quantities of heat H2, H3 etc. are calculated. It is found that 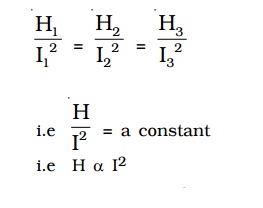 The same amount of current I is passed for the same time t through different coils of resistances R1, R2, R3 etc. The corresponding quantities of heat gained H1, H2, H 3 etc. are calculated. It is found that,

The same amount of current I is passed through the same resistance R for different intervals of time t1, t2, t3 etc. The corresponding quantities of heat gained H1, H2, H3 etc. are calculated. It is found that

2. Some applications of Joule heating

Electric iron, electric heater, electric toaster are some of the appliances that work on the principle of heating effect of current. In these appliances, Nichrome which is an alloy of nickel and chromium is used as the heating element for the following reasons.

1.     It has high specific resistance

Fuse wire is an alloy of lead 37% and tin 63%. It is connected in series in an electric circuit. It has high resistance and low melting point. When large current flows through a circuit due to short circuiting, the fuse wire melts due to heating and hence the circuit becomes open. Therefore, the electric appliances are saved from damage.

Since the resistance of the filament in the bulb is high, the quantity of heat produced is also high. Therefore, the filament is heated to incandescence and emits light. Tungsten with a high melting point (3380oC) is used as the filament. The filament is usually enclosed in a glass bulb containing some inert gas at low pressure.

Electric arc and electric welding also work on the principle of heating effect of current.

In some cases such as transformers and dynamos, Joule heating effect is undesirable. These devices are designed in such a way as to reduce the loss of energy due to heating.

In 1821, German Physicist Thomas Johann Seebeck discovered that in a circuit consisting of two dissimilar metals like iron and copper, an emf is developed when the junctions are maintained at different temperatures.

The magnitude and sign of thermo emf depends on the materials of the two conductors and the temperatures of the hot and cold junctions. Seebeck after studying the thermoelectric properties of different pairs of metals, arranged them in a series called thermoelectric series. The direction of the current at the hot junction is from the metal occurring earlier in the series to the one occurring later in the series. The magnitude of thermoemf is larger for metals appearing farther apart in the series. The thermo-electric series of metals is :

The position of the metal in the series depends upon the temperature. The thermoemf of any thermocouple has the temperature dependence given by the relation,

where θ is the temperature difference between the junctions and α and β are constants depending on the nature of the materials. 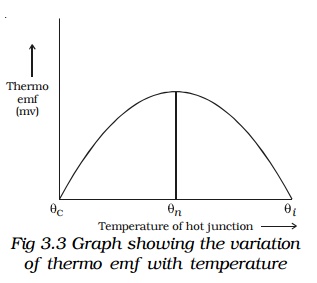 In 1834, a French scientist Peltier discovered that when electric current is passed through a circuit consisting of two dissimilar metals, heat is evolved at one junction and absorbed at the other junction. This is called Peltier effect. Peltier effect is the converse of Seebeck effect. 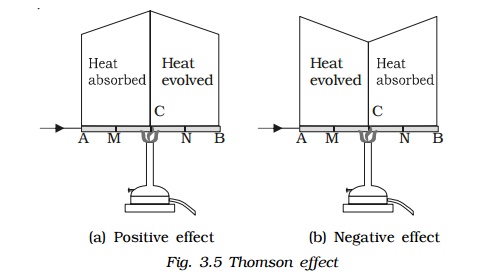 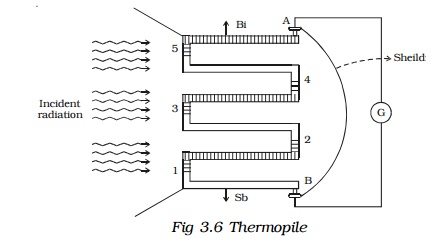 Thermopile is a device used to detect thermal radiation. It works on the principle of Seebeck effect.

Since a single thermocouple gives a very small emf, a large number of thermocouples are connected in series. The ends are connected to a galvanometer G (Fig. 3.6). One set of junctions (1,3,5) is blackened to absorb completely the thermal radiation falling on it. The other set of junctions (2,4) called cold junction is shielded from the radiation.

When thermal radiation falls on one set of junctions (1, 3, 5) a difference in temperature between the junctions is created and a large thermo emf is produced. The deflection in the galvanometer is proportional to the intensity of radiation.