Whenever there is a change in the magnetic flux linked with a closed circuit an emf is produced. This emf is known as the induced emf and the current that flows in the closed circuit is called induced current. 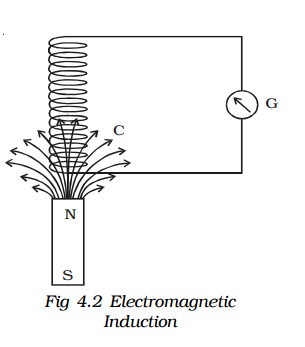 Fig 4.2 consists of a cylindrical coil C made up of several turns of insulated copper wire connected in series to a sensitive galvanometer G. A strong bar magnet NS with its north pole pointing towards the coil is moved up and down. The following inferences were made by Faraday.

(i)                Whenever there is a relative motion between the coil and the magnet, the galvanometer shows deflection indicating the flow of induced current.

(ii)             The deflection is momentary. It lasts so long as there is relative motion between the coil and the magnet.

(iii)           The direction of the flow of current changes if the magnet is moved towards and withdrawn from it.

(v)             However, on reversing the magnet (i.e) south pole pointing towards the coil, same results are obtained, but current flows in the opposite direction. 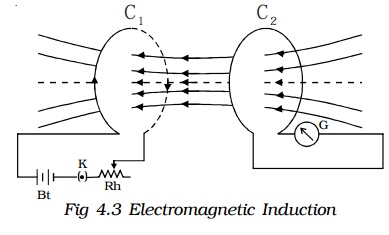 Faraday demonstrated the electromagnetic induction by another experiment also.

Fig 4.3 shows two coils C1 and C2 placed close to each other.