The line integral does not depend on the shape of the path or the position of the wire within the magnetic field. If the current in the wire is in the opposite direction, the integral would have the opposite sign. If the closed path does not encircle the wire (if a wire lies outside the path), the line integral of the field of that wire is zero. Although derived for the case of a number of long straight parallel conductors, the law is true for conductors and paths of any shape. Ampere’s circuital law is hence defined using equation (1) as follows :

A long closely wound helical coil is called a solenoid. Fig 3.15 shows a section of stretched out solenoid. The magnetic field due to the solenoid is vector sum of the 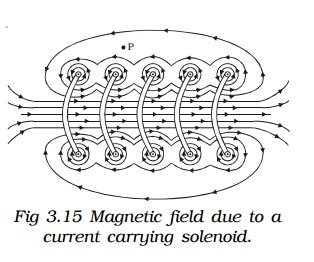 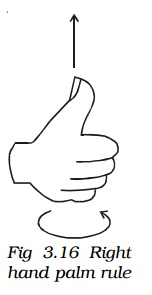 2. Magnetic induction due to a long solenoid carrying current.

Let us consider an infinitely long solenoid having n turns per unit length carrying a current of I. For such an ideal solenoid (whose length is very large compared to its radius), the magnetic field at points outside the solenoid is zero. 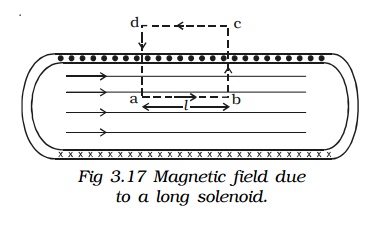 To find the magnetic induction (B) at a point inside the solenoid, let us consider a rectangular Amperean loop abcd.

Since the path of integration includes nl turns, the net current enclosed by the closed loop is

When looked from one end, if the current through the solenoid is along clockwise direction Fig 3.18a, the nearer end corresponds to south pole and the other end is north pole.

When looked from one end, if the current through the solenoid is along anti-clock wise direction, the nearer end corresponds to north pole and the other end is south pole (Fig 3.18b)