AB and CD are two straight very long parallel conductors placed in air at a distance a.

AB and CD are two straight very long parallel conductors placed in air at a distance a. They carry currents I1 and I2 respectively. (Fig 3.23). The magnetic induction due to current I1 in AB at a distance a is 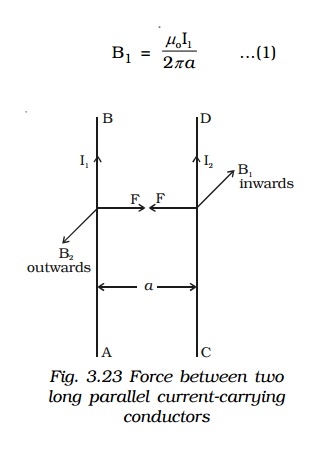 By Fleming’s Left Hand Rule, F acts towards left. Similarly, the magnetic induction due to current I2 flowing in CD at a distance a is

This magnetic field acts perpendicular to the plane of the paper and outwards.

The conductor AB with current I1, is situated in this field. Hence force on a segment of length l of AB due to magnetic field B2 is

The above conditions lead the following definition of ampere.

Ampere is defined as that constant current which when flowing through two parallel infinitely long straight conductors of negligible cross section and placed in air or vacuum at a distance of one metre apart, experience a force of 2 × 10-7 newton per unit length of the conductor.