Whirling disease caused by the protozoan Myxosoma cerebralis is one of the well-known diseases of salmonids, and has been reported from many parts of the world including the whole of Europe, North and South America,Africa,Asia and New Zealand.

Whirling disease caused by the protozoan Myxosoma cerebralis is one of the well-known diseases of salmonids, and has been reported from many parts of the world including the whole of Europe, North and South America,Africa,Asia and New Zealand. It affects all species of trout and salmon, particularly the young. A common sign of the disease is rapid, tail-chasing behaviour when the fish are frightened or trying to feed. This is caused by the parasite feeding on the cartilage of young host fish. In advanced stages of the disease, skeletal deformation, including deformed heads, jaws and gill covers, as well as spinal curvature, can be observed. When exposed to the disease early in life, trout may develop ‘blacktail’. Acutely infected fry reared in contaminated water may not show any symptoms before high mortality sets in. When exposed, older fish exhibit less whirling behaviour. Again, fish with light infections may not show any signs at all, but will actually be carrying spores throughout their life. Confirmation of diagnosis has to be by isolation of spores or immature forms of the parasite in histological sections.

Infected fish, contaminated water and mud are known to be the reservoirs of infection. It has been reported that the spores may survive for 10–15 years in contaminated mud (Christensen, 1972). The exact route of infection has not yet been fully determined, but it would appear that the spores released by dead or living fish (fig. 9.18) develop infectivity in mud after a period of four to five months (Hoffman and Putz, 1969). It has been suggested that tubificid worms may be involved in the transmission. Spores can survive as long as two months in frozen infected fish. 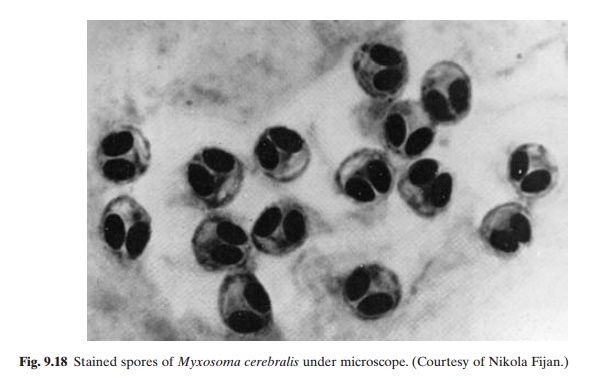 While rainbow trout and Atlantic and kokanee salmon may become severely diseased by the parasite, brook trout, coho salmon and lake trout seem relatively resistant to the disease. The first 12 months of the life of the fish are the most susceptible period for infection. Fish between four and five months old do not develop acute clinical signs, even when infected, and may serve as asymptomatic carriers. Spore formation in infected fish takes about 52 days at 17°C. It may take about 28 weeks after exposure for symptoms of the disease to appear.

The only means of preventing infection by M. cerebralis is to prevent contact of susceptible fish with the parasite. The importation of infected fish or use of contaminated water should be avoided. Since the disease has become established in certain areas, it is extremely difficult to eradicate the pathogen. The use of resistant strains has been suggested as a management alternative. Through regulation of imports of fish and fish eggs by approved certification procedures, spread of the disease to uncontaminated areas can be controlled. There is no known effective therapy for the disease.