Furunculosis is a septicaemic bacterial disease occurring mainly in salmonids.

Furunculosis is a septicaemic bacterial disease occurring mainly in salmonids. The disease has almost worldwide distribution and also infects many species of cold-water and warm-water fishes, besides salmonids. The name furunculosis is derived from the furuncules or blisters that occur on the skin of infected fish (fig. 9.7). But this is not a sure sign of the disease as furuncules can occur in other types of infections as well and also because, in acute cases of furunculosis, furuncules may not be present. The gram-negative bacterium Aeromonassalmonicida, which is the causative agent, may 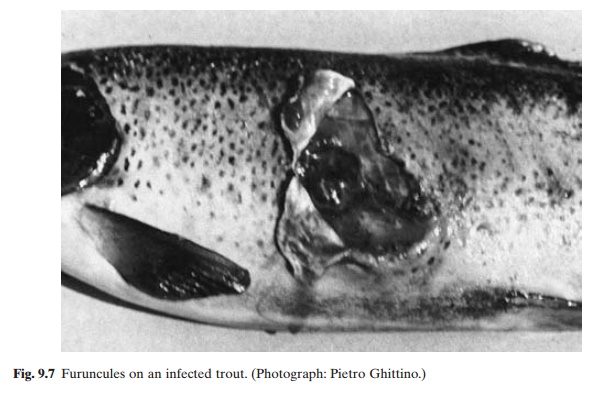 survive for days or weeks in water, but cannot persist indefinitely in the absence of a carrier fish. The classic salmonid furunculosis is caused by strains of A. salmonicida which produce brown pigment on bacteriological media. The ulcer disease in goldfish, the carp erythroder-matitis and certain disease conditions in some other warm-water fishes are consequences of infections with strains or subspecies of A.salmonicida which do not produce such brownpigment.

Positive diagnosis has to be based on isolation and identification of the causative agent. The organism is typically a gram-negative, non-motile rod that ferments selected carbohydrates, produces cytochrome oxidase and yields a water-soluble brown pigment on several types of isolation agar (fig. 9.8). But special care is recommended in identifications as a number of atypical achromogenic variants have been reported. Asymptomatic carriers are very difficult to detect. To establish the absence of carriers in a brood stock, the use of serum agglutination techniques or corticosteroid techniques might have to be employed (Bullock and Stuckey, 1975). 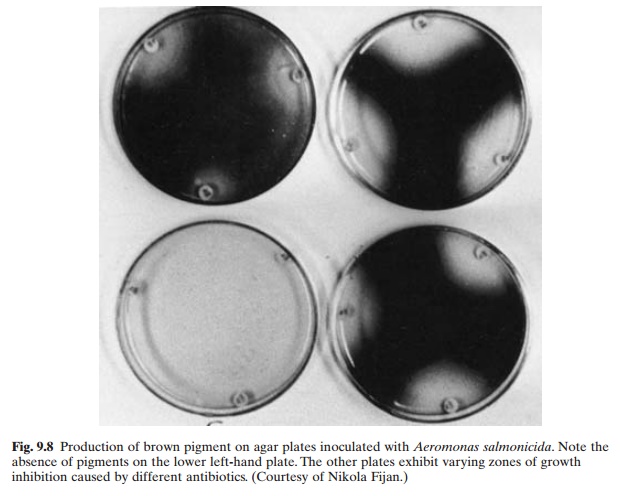 The incubation period for acute cases is probably two to four days, but in chronic cases the period may be extended by several weeks at lower temperatures. Furunculosis is usually seasonal, with peak incidence during the mid-summer months of July and August.

In carp erythrodermatitis and goldfish ulcer disease, clinical signs appear first only on the skin: small local erosions surrounded by an inflamed reddish zone developed gradually into large and sometimes deep ulcers. Seriously affected moribund fishes also have protruding eyes, fluid in the body cavity and oedematous organs. The causal agent can be isolated from the inflamed skin. Fish which recover from the disease can have scars on the skin.

Epizootics can be treated with medicated feeds. Terramycin (oxytetracycline), added to feed at the rate of 3 g per 45 kg fish, can be administered daily for 10 days. The recommended dosage of sulphamerazine is 5–10 g for 45 kg fish, fed for 10–15 consecutive days.

Sulphonamides or nitrofurans can also be used, as well as antibiotics. It should be remembered, however, that in some areas the stocks have developed resistance to terramycin and sulphamerazine, probably due to the feeding of low levels of these antibiotics as a prophylactic measure.