Viral haemorrhagic septicaemia is an acute to chronic viral disease of cultured salmonids, especially hatchery-reared rainbow trout, in Europe. The disease was first recognized in Germany in 1938 and later in Denmark, where it was called Egtved disease. The new name VHS was recommended in 1966 to reduce confusion. The disease is caused by a bullet-shaped rhabdovirus, very similar in size and shape to the IHN virus. The disease causes high mortality among rainbow trout fingerlings. If exposed for the first time, older fish are subject to chronic infection. Transmission is by contact and from fish to fish through water. As the water temperature rises, losses become less and cease during spring, recurring in autumn. Stress evoked by transportation or handling of trout can cause outbursts of the disease, with high mortality.

Early clinical signs of VHS can easily be confused with those of other viral, bacterial or parasitic infections. Acutely infected rainbow trout are dark in colour, lethargic and exhibit haemorrhages in the fin sockets. Exophthalmia is common and persists throughout the courseof the disease. With advance of the disease, the fish becomes nearly black and develops acute anaemia. The gills become pale in colour and bleeding occurs in gills and muscles (fig. 9.3). Signs of excitability can be seen, including erratic swimming similar to that of trout suffering from whirling disease caused by the protozoan parasite Myxosoma cerebralis. The diagnosis can be confirmed only by isolation and serological identification of the virus in an appropriate cell culture system. As in the case of IHN, the virus can be isolated from the carrier fish only during or soon after spawning. It can seldom be isolated from asymptomatic fish at other times. 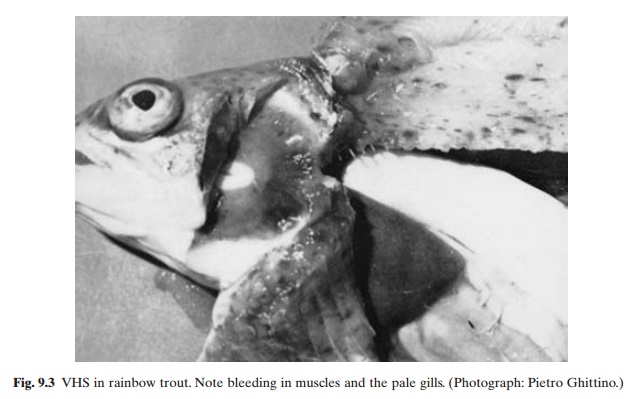 Although rainbow trout is the main species affected by VHS, other species also can be infected. Younger fish are more susceptible to the disease and most severe losses occur at the fingerling stage. Yearling fish generally suffer milder attacks and fish over two years old are almost completely resistant to infection. The disease is more serious at temperatures below 15–16°C. The incubation period appears to be about six days at 15°C and 8–11 days at about 10°C.

As there is no known cure for VHS, prevention is the best approach to control as in the case of other viral diseases. As there is strong circumstantial evidence that survivors of the epizootic become asymptomatic carriers, the transfer of such fish and the shipment of eggs contaminated by virusladen ovarian fluids should be avoided. Healthy fish should be isolated from possible sources of infection. If contaminated water has of necessity to be used in the farm, it should be thoroughly disinfected before use. The virus survives in water for more than 24 hours at 14°C.