Growths of water moulds (Saprolegniaceae) are common in the aquatic environment.

Growths of water moulds (Saprolegniaceae) are common in the aquatic environment.

Although some forms are known to be primary invaders of fish and other aquatic organisms, most of them are saprophytic opportunists taking advantage of necrotic tissue associated with injuries, bacterial or parasitic lesions, dead

and decaying eggs or generally unsanitary conditions. The most important fungal diseases are caused by members of the orders Saprolegniales, which cause a host of integumentary mycoses in most teleost fishes, and Lagenidiales, which infect eggs and early larval stages of crustaceans such as penaeids, crabs and lobsters.

Saprolegniasis is a disease affecting the skin and gills of fresh-water fish and crustaceans caused by Saprolegnia and a number of non-saprolegniaceous fungii, includingPythium and Leptomitus. The three major species of Saprolegnia associated with the disease are S. ferax,

S. parasitica and S. diclina. They can be identified by the characteristic profusely branched, non-septate, cotton-wool-like tufts of mycelium (fig. 9.13). They reproduce asexually by means of biflagellate spores. 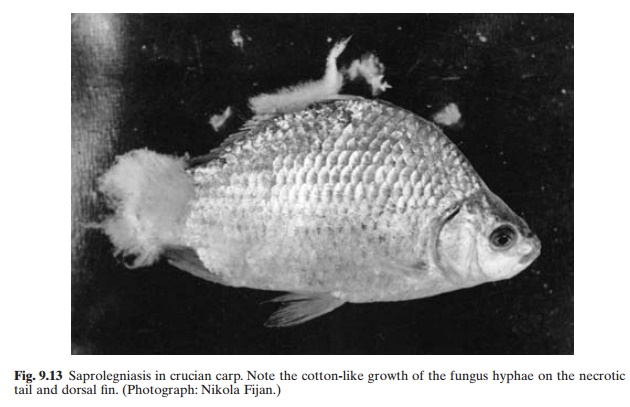 Environmental stress, overcrowding, poor handling and weakness caused by bacterial and viral infections appear to be the factors that make animals susceptible to saprolegniasis.

Temperature appears to have a major role; in temperate climates epizootics occur at low temperatures, whereas in the tropics they occur in high-temperature conditions.

Lesions appear as grey-white patches on the skin, fins, eyes, mouth and gills. The colour may change to dark grey or brown as the mycelium tangle and trap debris. The mycelium invades the uppermost layer of the dermis and then ramifies laterally, eroding the epidermis. Affected eggs may be completely covered by the fungus.

Control of the disease should obviously start with avoidance of primary causes like bad handling, injuries, poor sanitation and water quality, and weakness of the animals. A suggested curative treatment for fish consists of baths of (i) potassium permanganate (1 g per 100 litres water for 60–90 minutes), (ii) common salt (10 g per litre of water for 20 minutes for young fish and 25 g per litre of water for 10 minutes for older fish), (iii) copper sulphate (5 g per 10 litres of water until the fish show signs of stress), and (iv) malachite green (67 ppm dip for 10–30 seconds).

Incubating eggs may be given a daily formalin bath for 15 minutes (1–2 ml 30 per cent formol for each litre of water fed into the incubator). Malachite green can be used at concentrations of 5 mg per litre or 1 g for 200 litres of water for half to one hour. A concentration of 5 g/m3 for 45 minutes, repeated every five or six days, has also been suggested. There are differences of opinion regarding the use of malachite green, as it is suspected that its use on trout eggs may result in genetic defects.

Fungi of the genus Branchiomyces cause the gill rot which is characteristic or branchiomycosis. The disease occurs in many species, including cyprinids and channel catfish, in the summer. Two species of Branchiomyces, namely B.sanguinis and B. demigrans, may be involved.In the beginning of the infection, the pale gills of the fish show deep red patches (figs. 9.14 and 9.15). As it progresses, necrosis of the gills sets in and the colour turns yellow-brown. Secondary infection of Saprolegnia often occurs at this time. 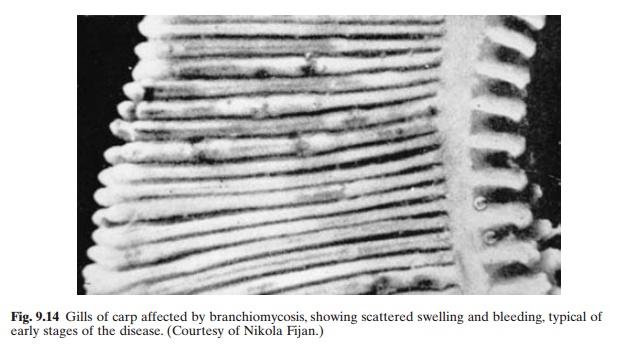 To prevent the infection, dense stocking of rearing facilities should be avoided, particularly during warm weather. High concentrations of organic matter in the water supply should be avoided, and clean fresh water should be provided as often as possible. Recommended curative treatment in ponds is 200 kg finely ground quicklime per hectare of pond area, maintaining pH below 9. Copper sulphate may be used at the rate of 8 kg per hectare of ponds of about 1 m depth. This may be applied in four monthly instalments of 2 or 3 kg each. Benza-lkonium chloride also can be used in one-hour baths at a concentration of 1–4 ppm. It is reported that baths of copper sulphate (1 g in 10 litres water) for 10–30 minutes will kill all the pathogens.