Copepod parasites of the families Arguilidae, Ergasilidae and Lernaeidae often infect several species of cultivated fish, such as common carp, trout and Chinese carps. The parasitic crustacean of epizootical interest are all warm-loving species with optimal temperatures above 20°C. They have a worldwide distribution. No inter-mediate hosts are involved in their development and all of them multiply in fish ponds if the temperature is favourable and the fish are overcrowded. The best known among them areArgulus foliaceus and Lernaea cyprinacea.

Argulosis, caused by species of Argulus (fish lice), namely A. foliaceus, A. japonicus and A.giordanii, is one of the most common andwidely distributed external infections of several species of fish including common carp, trout, grass carp, black carp, bream and eel. Out-breaks of argulosis often develop into epizootics, causing mass mortality. Argulus is a large parasite with a wide, oval, flattened greyish-green body (fig. 9.20). The organs of attachment end in curved hooks. There is a suctorial proboscis and suckers on the ventral side and four pairs of swimming legs. 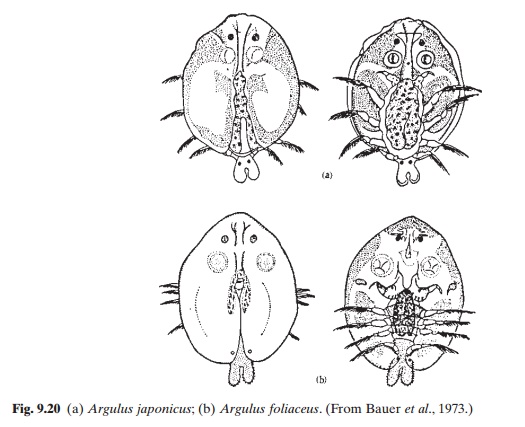 The female of A. foliaceus, which is the most common of the three species, lays eggs on submerged objects in batches of 250–300, which are attached to substrates. Depending on the temperature, the embryonic development takes 15–55 days. The larvae that hatch out swim free in water for two to three hours and die unless they find a host. Eggs die rapidly if they become dry.

Younger fish appear to be more susceptible to infection. Older fish may not suffer from the infection, but would become carriers of the parasite. Because of the lack of host-specificity, Argulus is generally considered a greater risk inaquaculture. It attaches itself to the fish, pierces the skin with its proboscis, injecting a toxic secretion, and sucks the blood of the host. The wound develops inflammation, with profuse secretion of mucus, oedema and haemorrhages. The wound becomes necrotic and the lesion may become secondarily infected. The greater susceptibility of the young ones is ascribed to the fact that the proboscis pierces both the epidermis and dermis, whereas in adults it is able to damage only the epidermis.

Prevention of argulosis consists of isolation of susceptible young fish from older age groups and preventing contact between infected fish and parasite-contaminated water. Ponds should be dried and disinfected after every rearing, to kill the eggs of the parasites. Sticks placed in different areas on the pond bottom can serve as traps for the eggs of the parasites – Argulus would attach eggs to the stick. It is reported that by daily removal of the sticks, most of the eggs can be removed and destroyed (Balarin and Hatton, 1979). Placement of wooden shields in a chess-board pattern for oviposition of Argulus has been suggested by Kiselev and Ivlieva (1953). They suggested removal of the shields every 15–20 days, depending on the temperature, drying them for a day and then replacing them. Effective removal of eggs can thus be achieved. For curative treatment, several chemicals have been recommended, including malathion and dipterex at 0.25 ppm and bromex at 0.12 ppm. Bromex appears to have a greater safety margin. Dip baths of lysol (1 ml lysol for 5 litres water) for 5–15 seconds or potassium permanganate (1 g in 1 litre water) for 40 seconds are also reported to be effective. Fish ponds can be treated with trichlorfon (0.5 g/m3)

for carp and eels or 0.2 g/m3 for more sensitive species, such as trout. If necessary, the treatment should be repeated after two to three weeks.

Lernaeosis, or anchor worm disease, caused by species of the genus Lernaea, has been observed in a number of fresh-water fish, including common and Chinese carps. They are very sensitive to salinity and cannot survive even low concentrations of salt. The two species of epizootic importance appear to be L. cyprinacea (fig. 9.21) and L. ctenopharyngodonis.The mature females of the species have a long, unsegmented body and the head has branched processes with which the parasite can penetrate the body of the host (fig. 9.22). There are no intermediate hosts for the species and the free-living larvae parasitize the skin or gills of fish. L. cyprinacea will parasitize any species of fish,but L. ctenopharyngodonis appears to prefer the grass carp. 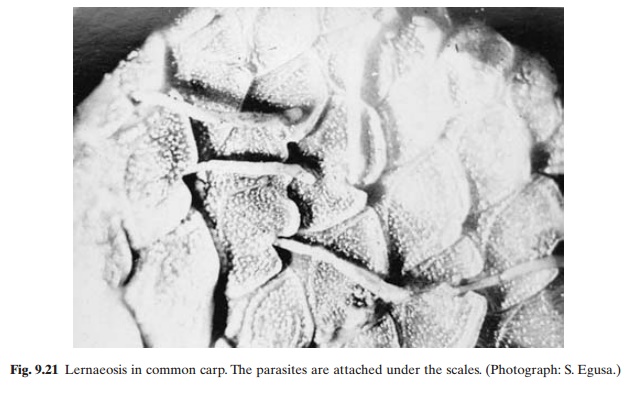 The metamorphosis of L. cyprinacea is rather complex, with three nauplii and five copepodid stages. Each female develops two egg sacs with 300–700 eggs. The optimal temperature is reported to be 23–30°C and the embryonic development takes three days. Hatching takes place on the fourth day. The development of nauplius stages lasts four to five days, followed by the copepodid stages in the next 9–10 days. The copepodid podid larva must find a host and attach itself for further development into the free-swimming cyclopid stage. Mating takes place during this stage, after which the males die and the females penetrate the skin of fish, settling in the muscle and remaining attached to the host. Depending on the temperature, between two and eleven generations have been observed in one year.

The parasite enters the fish-rearing facilities through water supplies. When it penetrates the skin of the host, reaching the muscles, deep ulcers, abscesses or fistulas are formed at the point of attachment. The margins of the ulcer are bright red or greyish in colour. Secondary infections may set in at this time. The inflammation at the point of penetration results in the formation of parasitic fibrous nodules. The parasite may also penetrate the liver, causing focal traumatic hepatitis.

It is difficult to eradicate adult parasites as they are very hardy and resistant to most chemicals. Potassium permanganate baths at a concentration of 2 ppm for 1–2 hours may kill most of the parasites, but it has been reported that within a short time young parasites begin to develop again. The free-living larval stages can more easily be controlled. Bromex, at a concentration of 0.12–0.15 ppm active ingredient in pond water, can kill these stages. The application has to be repeated three times, at intervals of about seven days in summer and 12–14 days at lower temperatures.