Several factors may create waves but the most important are: · Wind · Human activity, such as shipping · Special natural phenomena such as earthquakes, land slips and underwater volcanic eruptions create waves known as tsunamis · Tide; waves with extremely long wavelengths are created.

Several factors may create waves but the most important are:

Waves created by the wind are the most relevant to aquaculture facilities and are further described below. Shipping may also create waves that are unwanted on fish farms. To avoid such waves, sites close to heavily trafficked sea routes should be avoided. Waves created by exceptional natural phenomena (tsunamis) are difficult to avoid even if such phenomena occur more frequently in some areas than others. Tsunamis have a very long wave-length (>100 m) and a long period (around 1000 s). In such waves an enormous amount of energy is stored. They do not represent a great danger if a boat is on the sea, because the wavelength is so long. However, when they reach shallower water, and especially when they reach the shore and start to break, all the energy that is stored in them is released, and the consequences can be fatal. Such waves can be up to 30 m high when the shoreline has forced them to increase in height to dissipate their energy; they cause enormous destruction when they hit the shore. Waves created by the tide normally present no problems for cage farms. The wavelength here is so long that it is not interpreted as a wave, and the wave period is 12.5 h. Such waves can, however, create very strong tidal currents.

Wind created waves: The main ingredient in the formation of waves on the open ocean is wind. Wind created waves are normally also what inhibits site selection for cage farming. When winds blow across water, a drag is applied on the surface and pushes the water up, creating a wave. The height will increase as long as the wind is strong enough to add energy to the wave. After a period of time there will be equilibrium between the energy in the wind and the energy in the waves; the wave height will now be stable. Once a wave is generated, it will travel in the same direction until it meets land or is dampened by an opposing force such as winds blowing against it in the opposite direction, or by friction.

The height of wind created waves depends on the wind velocity (Uv), the duration of the wind (tv), the fetch length (F) and the presence of other waves when the wind begins to blow. The fetch length is the distance where wave development can take place (Fig. 15.7). 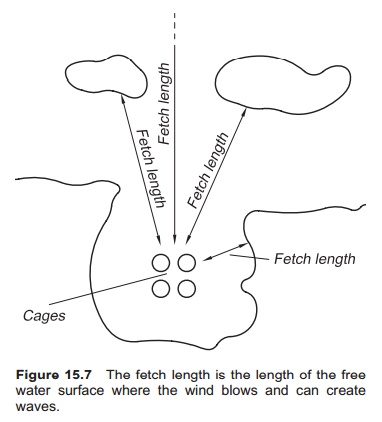 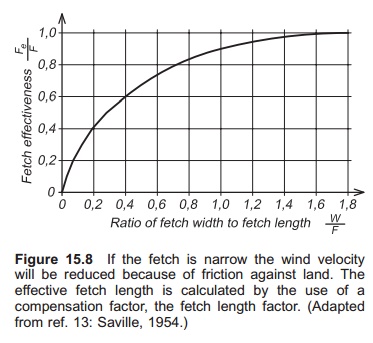 The length where the wind blows is 10 km and the width of the fjord is 2 km. 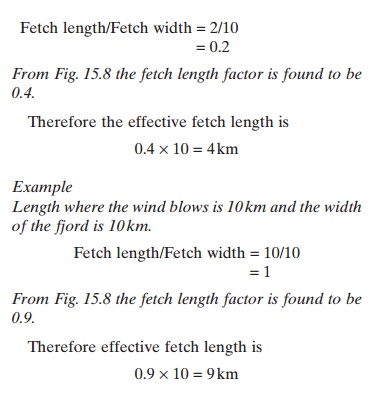 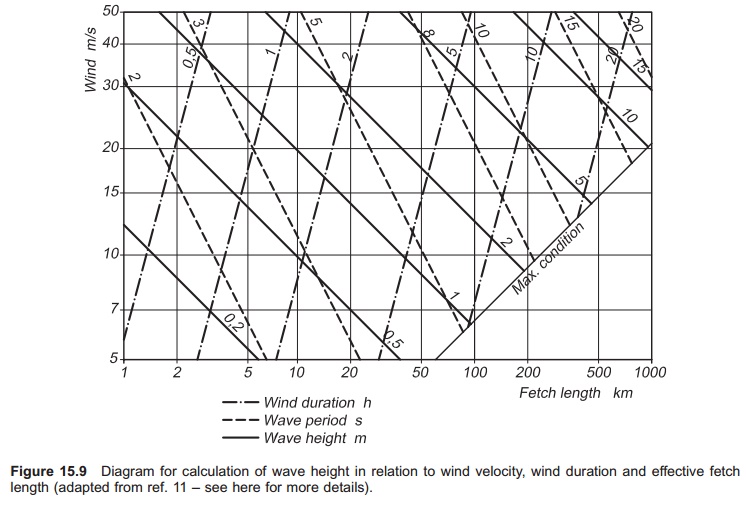 Use SMB to estimate the wave height and wave period for a site if a fresh breeze of 20 kn blows for 2 h and the fetch length is 10 nm.

This means that wind duration is the limiting factor for development of waves; the wind does not blow long enough to create maximum wave height in pro-portion to the fetch length. Critical values for the site will therefore be:

The SMB method with the values and diagram given above may be used for depths greater than 15 m, which is normal in sea cage aquaculture. For intermediate depths and shallow water other for-mulae and diagrams apply.11

In open sea conditions with no limitation of the wind duration, the wave height will only depend on the effective fetch length and the wind velocity. The wave height created is the maximum possible with the given fetch length. A simplified method can then be used to calculate wave height in shallow water11 (Table 15.1): 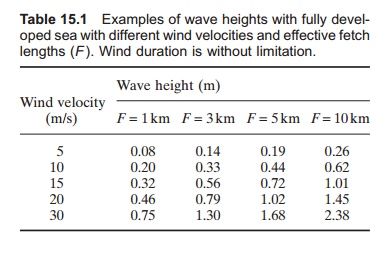 The following may be used to estimate the maximum wave height from the significant wave height:

Use the simplified method to calculate the significant wave height and wave period for a near gale with wind velocity of 15 m/s and fetch length of 3 km.

Swell: Swell comprises wind generated wavescreated far away, which can also be called ocean waves; these may also affect cage farms when they come in from the sea. This is another reason for sitting cage farms in sheltered positions behind holms and breakwaters. Swells are characterized by quite large wave heights and long wavelengths. A swell can be recognized by its higher wave period compared to a local wind generated wave: typical swell periods are in the range 9–20 s, compared with 2–11 s for wind generated waves.