There will always be some inaccuracy when describing and calculating the environmental loads affecting cage farms.

There will always be some inaccuracy when describing and calculating the environmental loads affecting cage farms. For example, this can be that the current velocity or wave height varies and might be slightly higher than expected. A load factor is recommended to compensate for the possible inac-curacy. Normally the load factors are between 1 and 1.5 depending on the uncertainty in the calculations of environmental loads. A load factor of 1.5 means that the environmental loads can be up to 50% more than those calculated and the mooring will still hold. The total force that is used in further calculations is then:

In the new Norwegian standard for mooring analysis, the standard load factor is set at 1.15 for unmanned farms and 1.3 for continuously manned farms when doing static analysis i.e. the safety factor is larger.

The breaking strength of the different types of mooring line is also given with some accuracy by the suppliers and is based on a number of measurements. To take care of possible inaccuracy when testing the material, and minor variations in the materials, it is recommended that a material factor (gm) be used. However, will this vary with the material and the degree of testing of the material that has been performed. Normally it lies between 1.1 and 5. To find size of the mooring lines necessary this must be taken into consideration, which gives the following equation:

FR=mooring forces (the force that the mooring lines shall tolerate)

To show how a mooring analysis can be performed an example is shown where the mooring line, buoy and anchor are to be dimensioned (Fig. 15.24). On a cage farm the calculated environmental force that an anchoring line must take up is 1 t or approximately 10 kN. The length and type of mooring line, buoy type and size, and anchor type and size should be found to keep the farm in position. The depth of the site is 30 m and the bottom is sand. Current veloc-ity is set to 0.2 m/s. 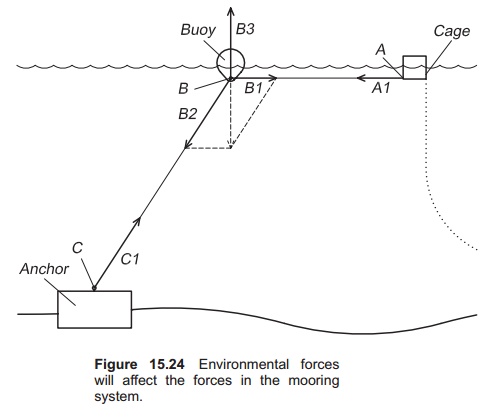 Then calculate the force in the direction x on the mooring line: 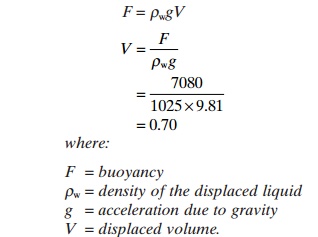 The mooring line must therefore tolerate a force of 10.61 kN.

Calculate the force in the y direction:

The buoy will be dragged down with a force of 3.54 kN.

Now the buoy can be described. The requirement for buoyancy is set to twice the force F in the mooring line which is 7.08 kN. Archimedes law is used to calculate the buoyancy; the density of sea-water, rw= 1025 kg/m3.

This means that the buoy needs a volume of 700 l or more to stay in the correct position on the surface. In addition the buoy must have buoyancy that covers its own weight; this depends on buoy type and is given by the supplier.

The next step is to calculate the size of the anchor. A block anchor is chosen. First the size to withstand the vertical lifting force (y) is calculated:

Choose a concrete block anchor with density fc of 2500 kg/m3. The weight of the anchor (G) is given by:

g = acceleration due to gravity

The buoyancy (F0) that will lift the anchor is, from Archimedes law:

The following equation may be used to find the nec-essary volume of the block anchor (y): 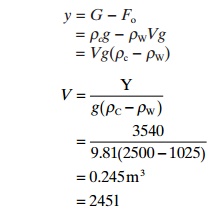 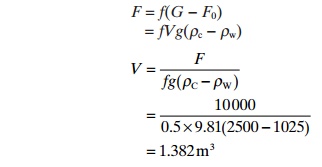 Therefore the volume of the block anchor must exceed 1.382 m3 or the mass be above 3.46 t. In practice two or three anchors will be used.