Description of the single components in a pre-stressed mooring system

The mooring line is fixed to the collar by a shackle. If a rope is used this should be spliced and a thimble used to reduce the bending of the rope.

Description of the single components in a pre-stressed mooring system

The mooring line is fixed to the collar by a shackle. If a rope is used this should be spliced and a thimble used to reduce the bending of the rope. All bending will weaken ropes to some extent. A bending diameter of three times the rope thickness is necessary to avoid significant weakening. A knot can reduce the strength of the rope by 50%.19 Rings may also be used in the connections because they tolerate chafing better. It is an advantage to over-dimension the connection, for instance by doubling the size of the maximum transferred forces.

The force through the connection point can be divided into horizontal and vertical components. To avoid breakage of the cage collar by the tide, the vertical component should be transferred so that it is as low as possible, almost negligible. By using several connection points to the collar, the forces transferred at each point will be reduced, although this will increase the mooring costs. Normally at least four points are used. As said previously, it is advantageous to split the single mooring line before attaching it to the collar, so more connection points are achieved; such an arrangement is known as a hen foot mooring from its design. 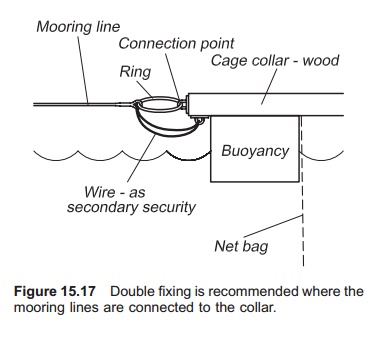 To secure the fixing point against breakage, a secondary fixing may be used (Fig. 15.17). An extra rope or wire transfers forces directly from the collar to the mooring lines if the main fixing point breaks.

Different materials and designs can be used for the mooring lines which are often made of synthetic rope. When choosing rope, the breaking strength is the most important factor, but price and duration are also major determinants. The elasticity, given by the E modulus, must also be taken into account. How much a line stretches lengthwise when loaded can be given in the mooring line characteristics.

Lines of synthetic rope are often stretched permanently after the first load so are beyond their elastic range and do not return to their original length. It may be advantageous to pre-stretch the rope before it is used; alternatively, the rope must be tightened after exposure to the environmental loads.

Different materials are used for synthetic ropes, such as PA (nylon), PE, PES and PP, all of which have advantages and disadvantages. PA tolerates the highest forces with a given diameter, while PP ropes have the lowest weight. Metal or Kevlar threads may also be integrated into the rope to increase its strength, but this also increases the cost.

Ropes may be exposed to chafing and this must be avoided. The rope may be covered, for instance with a PE pipe, to reduce chafing. Variable loads, such as occur in mooring lines, will decrease the strength of the rope more than constant loads. The lifetime of synthetic rope in a mooring system can be set as 4 years as a starting point, but will of course depend on the rope and the loads on it.

If a chain is used in the mooring system, it will be exposed to corrosion. Good quality therefore confers an advantage, but this will be a question of price compared to duration. Chain is heavier to handle than rope and therefore more handling time is necessary. Chain tolerates more mechanical influ-ence (chafing) than rope. For this reason chain is often used near the bottom, close to the anchor, normally for the first 15–20 m of the mooring lines. Afterwards rope is used because it is so much easier to handle. To avoid the connection point being exposed to chafing against the bottom, a small buoy may be added here.

Wire or metal rope, may also be used for mooring, but even though it is strong, it is expensive and difficult to work with, so it is seldom used. It may, however, be a good alternative secondary fixing for cages.

Buoys are used to hold the mooring lines up so that vertical forces on the collar are avoided (Fig. 15.18).

They will also take up the weight of the mooring system so this is not transferred to the cage if placed some distance (normally 15–20 m) away from the collar. By limiting this distance, spreading of the mooring system will also be avoided. Furthermore, to ensure horizontal transference of forces, the buoys have a major roll in pre-stressing the farm by pre-stretching the mooring lines. Buoys will also function like extension springs and damp wave movements, for instance. When a load is added to the cage the buoy will be dragged down and not so much will be seen on the surface; if the load is removed it will float up again. 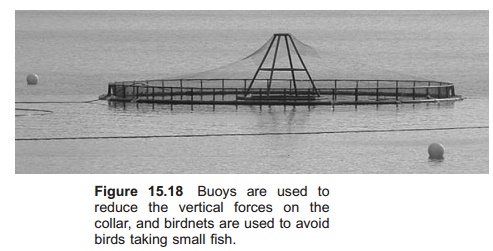 Typical buoy sizes are from 200 to 700 l. The buoys can be filled with air or foam. To avoid puncturing reducing the buoyancy, the use of foam filled buoys is highly recommended, and in some places is mandatory. Expanded PS or polyurethane (PU) is commonly used. If an air-filled buoy is dragged below the water surface the buoyancy will decrease rapidly because the buoy is compressed; reduced volume results in reduced buoyancy. Foam-filled buoys will also be compressed when beneath the water surface. PVC foam filling will tolerate more pressure, but is more expensive than PU. The buoyancy of the buoys is recommended to be somewhat higher than the calculated requirement, twice what is necessary, for instance. Round, cylindrical and polygonal buoys are used in mooring systems. Experiments in which single buoys were replaced with multiple floats covering a distance of the rope showed that these gave a much smoother dynamic response on the anchor lines.

A lump weight can be added to the mooring line between the cage collar and the buoys. This makes it possible to go over the lines by boat, and will also function as an additional pre-stressor of the farm and reduce jerks in the lines. However, the wear on the mooring lines is increased by this method, which is therefore not recommend.

The magnitude of the pre-stress in the mooring lines for a cage farm depends on the site and other factors. One method is to pre-stress at high tide so that 75% of the volume of the buoy is below the surface and 25% is above to take additional loads. Inspection of the buoys could then constitute a simple control of the mooring system. Since all mooring lines are equal and equally pre-stressed, all buoys will have the same volume above the surface. It can be an advantage to have distinct marks on the buoys to control more easily how much of the buoy volume is below the surface. This check must, however, be done when no environmental forces affect the cage. If, for instance, a current is coming in from one side, the buoys on this side will be dragged down and those on the opposite side will float higher in the water as a result of the unequal loads on the mooring lines.

The simplest type of anchor is the dead weight or block anchor. Theoretically all heavy objects, such as old engines may be used, but they may be diffi-cult to handle. In addition, this may result in chafing of the mooring lines. Concrete blocks are most commonly used as weight anchors and vary from some hundreds of kilograms to several tonnes. As the density of concrete is quite high (around 2.4 t/m3) it will easily sink to the bottom, stay there and take up forces. The great disadvantage with block anchors is that they are heavy to handle. Large cranes are needed on the boats setting them out and precautions must be taken to avoid tilting the boat during this operation. 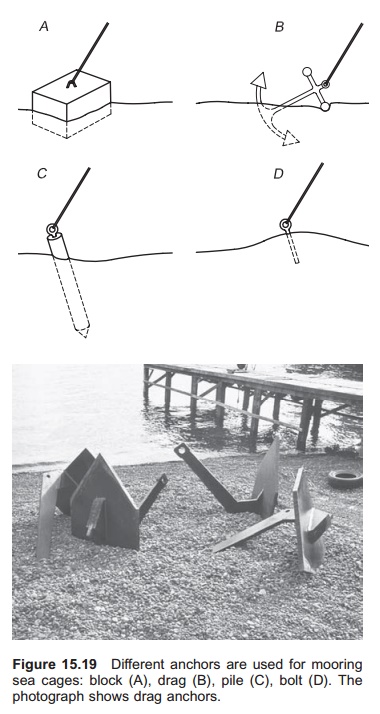 To increase the friction coefficient, the bottom of the anchors can be rough, even having iron bars emerging from the base. Another method of increasing the friction is to add an iron jacket around the bottom of the block. This will increase the forces holding the anchor on the bottom, because it is sucked to the bottom like a sucking disc, assuming suitable ground conditions such as clay. The angle at which the mooring line is joined to the block is, of course, also important in inhibiting horizontal movement. To avoid tilting of block anchors, the width of the blocks ought to be large in relation to the height (>2 : 1), or the block anchor may tilt over the mooring lines and cause chafing.

A drag anchor or ebbing anchor is another type much used (Fig. 15.19). The aim of the design is for the anchor to be dragged down into the ground like a plough and become fixed. Various designs of ebbing anchors are available, and the different suppliers normally have their own designs. The old traditional one is the stock anchor as used on boats; today more effective designs for mooring of fish farms are available. How well fixed an ebbing anchor is to the bottom depends on the bottom conditions and the design of the anchor; the angle of the mooring line is also important. The optimum angle depends both on the bottom conditions and anchor design. The angle for ebbing anchors used in sand can be 30–35° and in clay 30–50°.

An ebbing anchor will tolerate a large horizon-tal force, but tolerance of vertical forces is low. To improve this, a heavy chain may be used before the anchor. Another method is to use a small block weight on the mooring line before the anchor. An ebbing anchor is of much lower weight than a block anchor, because it is based on a totally different principle, but is more expensive. From the back edge of the ebbing anchor there should be a rope to the surface; to keep the rope on the surface where it can be reached, it is attached to a buoy. This must be done to ensure the anchor can be released when removal is necessary, otherwise this might be impossible as the anchor is normally completely buried in the bottom after the mooring system has been pre-stressed.

Bolts can be used to advantage where it is possible  to  fasten  the  mooring  lines  in  rock, usually where the mooring lines lead to land, but bolts mayalso be use under the water surface. Galvanized bolts are set into drilled holes; either they can have an expanding construction or expanding slurry canbe injected into the holes. The bolts are either of the eye or T-type.

Piles are an alternative in sand and clay bottoms, but the forces they can take up are normally quite low; otherwise they must be very large which increases the cost considerably.

There are several other special anchors that could be used, but they are normally more expensive. One type used in the offshore oil industry is the suck anchor. In principle the anchor is a large specially designed sucking cup that sucks down to the bottom. This can be made from a wire-spoked wheel with a plastic cover.