The framework construction for stretching out the net bag can be combined with the buoyancy, as seen in plastic floating ring cages (PE or polypropylene (PP) pipes). Alternatively, the buoyancy can be independent of the cage collar as can be seen when using wood or steel for support systems with blocks of expanded polystyrene (PS), such as StyrofoamTM, as buoyancy.

The buoyancy is necessary to keep the cage bag in the correct position in the water column. It must have a smooth surface to inhibit the accumulation of fouling. Fouling increases the weight of the collar, which results in increased requirements for buoyancy; furthermore, fouling will increase the friction between the flowing water and the sea cages which again increases the forces on the mooring system. Expanded polystyrene is commonly used as buoyancy; if not covered with PE, exposure to sunlight causes it to age. It turns yellow and becomes brittle. Uncovered polystyrene will also be very prone to fouling, because the surface becomes so rough. The use of uncovered poly-styrene in sunlight is not recommended; to increase its durability it is quite common to put it into PE cylinders or rhombs.

If too much buoyancy is added the cage collar will float high up in the water column and fully follow the wave motions, floating on top of the water column throughout. Unnecessarily large forces on the cage bag and mooring system from the induced vertical motion result if there is much wave action in the area. The cost of the buoyancy will also be unnecessarily high. Buoyancy elements ought to have an aerodynamic shape to reduce the forces transferred from the water current. The current forces on the collar are, however, much smaller than the forces on the net bag.

The framework or collar can be of circular, polyg-onal or square construction. It is best to use a round framework because the forces are equal all around the circumference; polygonal or square frameworks will have large forces in the corners and eventually breakages in the construction will occur here (see, for example, ref. 15). For this reason, good connections at these points are important. Wooden frame-works are sometimes used to construct sea cages; only bolts, nails or ropes are used to connect the planks at the corners. If these cages are used in exposed sites with fast currents and high waves, the framework will break at the weak points in the corners.

Polygonal collars are better than square collars because there are more corners to share the total forces, and the force in each corner is therefore reduced. 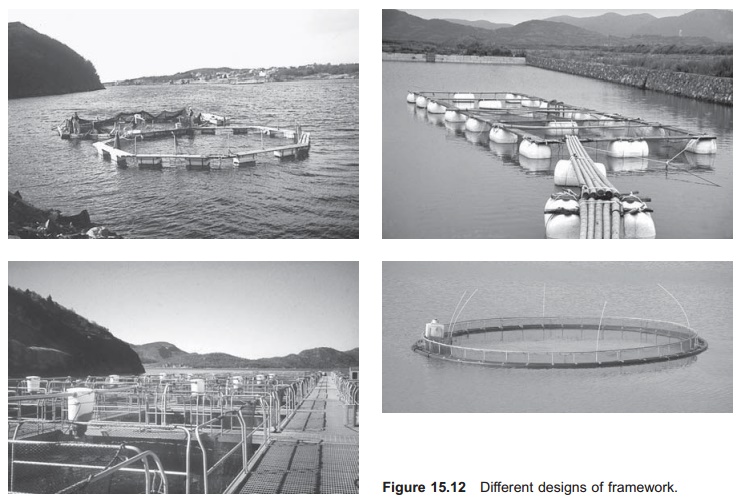 Different materials may be used in the frame-work (Fig. 15.12), ranging from steel, aluminum, wood and concrete which are rigid, to more flexible materials such as PE and rubber. The modulus of elasticity for the material is a measure of its rigid-ity and is given by its E value, the load in relation to non-permanent deformation. Steel has a high E value, while wood has a rather lower value;1 that for PE is even lower. Bamboo is also used in cage collars, but only on low exposed sites.

The risk of corrosion of the framework in sea-water when using steel or aluminum must be taken into consideration. If steel is used it must always be covered, for example with paint or zinc, to avoid corrosion.