Design of the mooring system

Design of the mooring system

The design used for the mooring system depends on the type of cages to be moored: these may be as follows (Fig. 15.16):

·  Single cages with walkway and landing 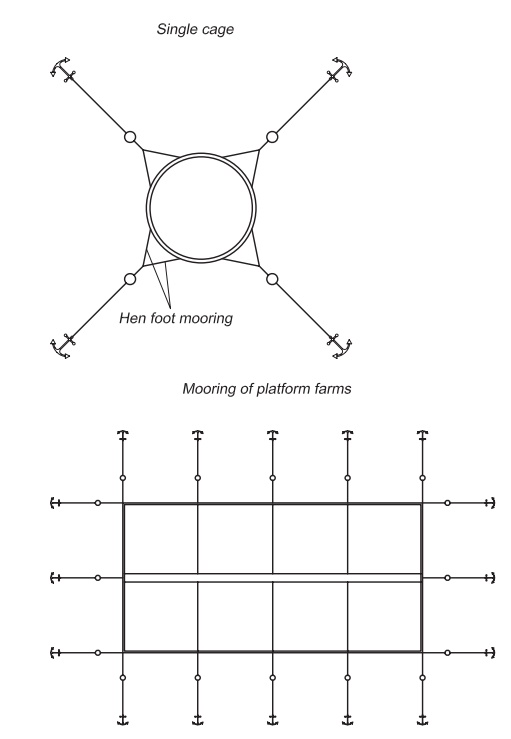 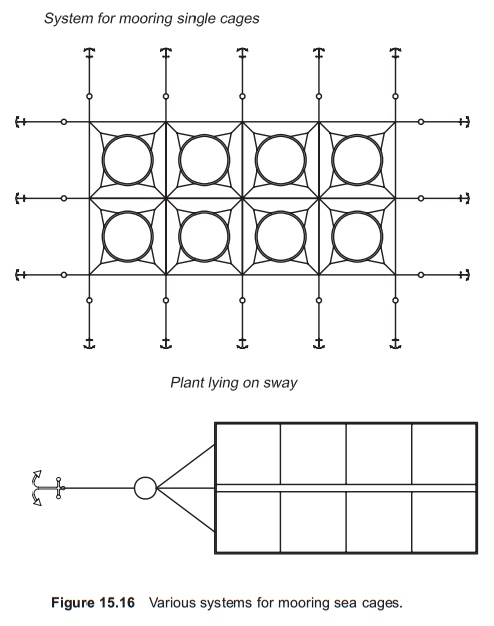 A single cage may be moored by between four and six single buoys attached to anchors and to the cage by mooring lines. It is recommended that the single mooring line be divided into two before the fixing point to the cage; this is known as the hen foot mooring; it reduces the forces at the points of attachment to the cage framework, because the number of fixing points is doubled. The points of attachment are critical in the mooring system, because all forces are transferred through these points. The cost of mooring single cages is high; the system is most viable for circular and polygonal cages.

Today, systems for mooring several cages are more usually used. Two or three longitudinal mooring lines are attached to each other with trans-verse mooring lines; in this way a frame where the single cages can be fixed is built. By lowering the frame 1–2 m below the water surface, access to the cages by boat is improved. Here again, the single cages are attached to the frame with a hen foot mooring. One single cage may be removed, taken out from the system and transferred to another site.

In ocean cages the requirements for the moorings system are large because the forces are so great. Ocean cages are moored individually and the producer will normally have their own mooring systems, which could be an integral part of the cage construction.

In a platform cage farm the mooring line is typically withdrawn from each corner and from the middle of the farm. Such farms are normally sited in protected water because they tolerate lower waves, due to their construction with linkages.