The resultant chrominance signal phasor (C) is added to the luminance signal (Y) before modulating it with the channel carrier for transmission. The amplitude, i.e., level line of Y signal becomes the zero line for this purpose.

The resultant chrominance signal phasor (C) is added to the luminance signal (Y) before modulating it with the channel carrier for transmission. The amplitude, i.e., level line of Y signal becomes the zero line for this purpose.

Such an addition is illustrated in Fig. for a theoretical 100 percent saturated, 100 percent amplitude color bar signal. The peak-to-peak amplitude of green signal (± 0.83) gets added to the corresponding luminance amplitude of 0.59.

For the red signal the chrominance amplitude of ± 0.76 adds to its brightness of 0.3.Similarly other colors add to their corresponding luminance values to form the chroma signal.

For example, in the case of magenta signal, the chrominance value of ± 0.83 when added to its luminance amplitude of 0.41 exceeds the limits of 100 percent modulation of both white and black levels.

Similarly blue signal amplitude greatly exceeds the black level and will cause a high degree of over modulation. If over modulation is permitted the reproduced colors will get objectionably distorted.

Therefore, to avoid over modulation on 100 percent saturation color values, it is necessary to reduce the amplitude of color difference video signal before modulating them with the color subcarrier. Accordingly, both (R–Y) and (B–Y) components of the color video signal are scaled down by multiplying them with what are known as ‘weighting factors’.

Note that no reduction is made in the amplitude of Y signal. It may also be noted that since the transmitter radiates weighted chrominance signal values, these must be increased to the uncompensated values at the color TV receiver for proper reproduction of different hues. 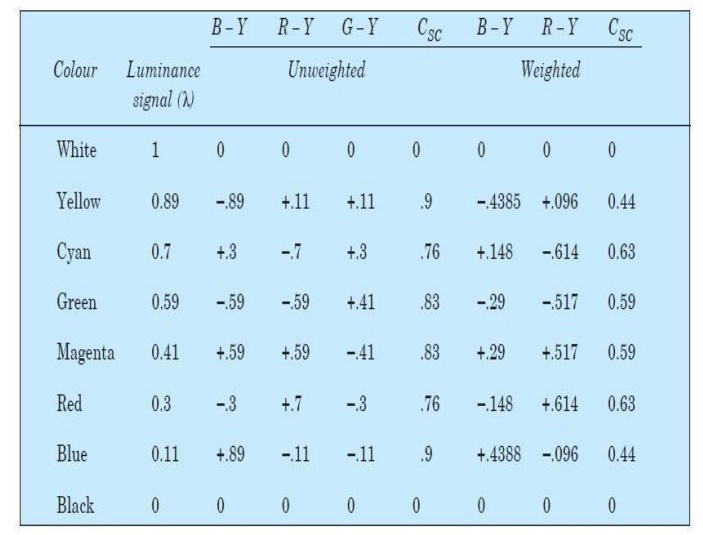 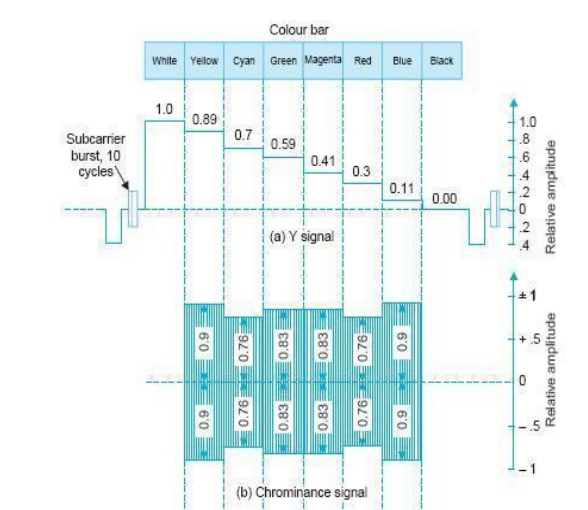 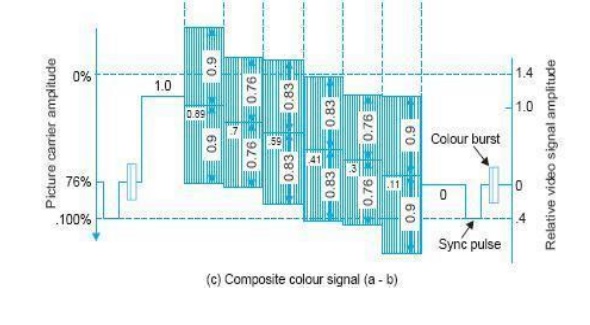 Generation of composite color signal for a theoretical 100% saturated, 100% amplitude color bar signal. As seen from the relative amplitude scales, the composite video signal would cause gross over-modulation. Therefore in practice the color difference signals are reduced in amplitude to avoid any excessive over-modulation