The problem of transmitting (B-Y) and (R-Y) video signals simultaneously with one carrier frequency is solved by creating two carrier frequencies from the same color subcarrier without any change in its numerical value.

The problem of transmitting (B-Y) and (R-Y) video signals simultaneously with one carrier frequency is solved by creating two carrier frequencies from the same color subcarrier without any change in its numerical value.

Two separate modulators are used, one for the (B-Y) and the other for the (R-Y) signal. However, the carrier frequency fed to one madulator is given a relative phase shift of 90° with respect to the other before applying it to the modulator.

Thus, the two equal subcarrier frequencies which are obtained from a common generator are said to be in quadrature and the method of modulation is known as quadrature modulation.

After modulation the two outputs are combined to yield C, the resultant subcarrier phasor. Since the amplitude of C, the chrominance signal, corresponds to the magnitudes of color difference signals, its instantaneous value represents color saturation at that instant.

Maximum amplitude corresponds to greatest saturation and zero amplitude to no saturation i.e., white. Similarly, the instantaneous value of the C phasor angle (θ) which may vary from 0° to 360° represents hue of the color at that moment.

Thus the chrominance signal contains full information about saturation and hue of various colors. This being a crucial point in color signal transmission, is illustrated by a few examples. However, it would be necessary to first express (R-Y) and (B-Y) in terms of the three camera output voltages.

Now suppose that only pure red color is being scanned by the color camera. This would result in an output from the red camera only, while the green and blue outputs will be zero. Therefore, (R-Y) signal will become simply + 0.7R and (B-Y) signal will be reduced to – 0.3R.

The resultant location of the subcarrier phasor after modulation is illustrated in Fig. Note that the resultant phasor is counter clockwise to the position of + (R-Y) phasor. Next consider that the color camera scans a pure blue color scene.

This yields (R-Y)= – 0.11B and (B-Y) = 0.89 B. The resultant phasor for this color lags + (B-Y) vector by a small angle. Similarly the location and magnitude for any color can be found out. This is illustrated in Fig. for the primary and complementary colors.

Another point that needs attention is the effect of desaturation on the color phasors. Since desaturation results in reduction of the amplitudes of both (B-Y) and (R-Y) phasors, the resultant chrominance phasor accordingly changes its magnitude depending on the degree of de-saturation.

Thus any change in the purity of a color is indicated by a change in the magnitude of the resultant subcarrier phasor. Color Burst Signal Suppressed carrier double sideband working is the normal practice for modulating color- difference signals with the color subcarrier frequency.

This is achieved by employing balanced modulators. The carrier is suppressed to minimize interference produced by the chrominance signals both on monochrome receivers when they are receiving color transmissions and in the luminance channel of color receivers themselves. As explained in an earlier chapter the ratio of the sideband power to carrier power increases with the depth of modulation.

However, even at 100% modulation two-thirds of the total power is in the carrier and only one-third is the useful sideband power. Thus suppressing the carrier clearly eliminates the main potential source of interference.

In addition of this, the color-difference signals which constitute the modulating information are zero when the picture detail is non-colored (i.e., grey, black or white shades) and so at such times the sidebands also disappear leaving no chrominance component in the video signal.

As explained above the transmitted does not contain the subcarrier frequency but it is necessary to generate it in the receiver with correct frequency and phase relationship for proper detection of the color sidebands.

To ensure this, a short sample of the subcarrier oscillator, 8 to 11 cycles) called the ‘color burst’ is sent to the receiver along with sync signals. This is located in the back porch of the horizontal blanking pedestal.

The color burst does not interfere with the horizontal sync because it is lower in amplitude and follows the sync pulses. Its exact location is shown in Fig.

The color burst is gated out at the receiver and is used in conjunction with a phase comparator circuit to lock the local subcarrier oscillator frequency and phase with that at the transmitter.

As the burst signal must maintain a constant phase relationship with the scanning signals to ensure proper frequency interleaving, the horizontal and vertical sync pulses are also derived from the subcarrier through frequency divider circuits. 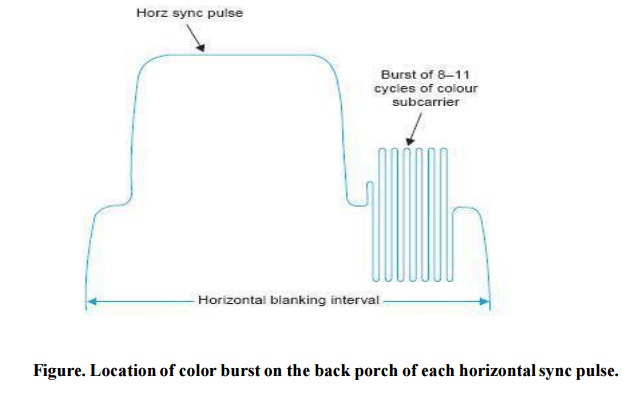