This tube was first developed by the Radio Corporation of America (R.C.A.). It employs three separate guns (see Fig. (a)), one for each phosphor. 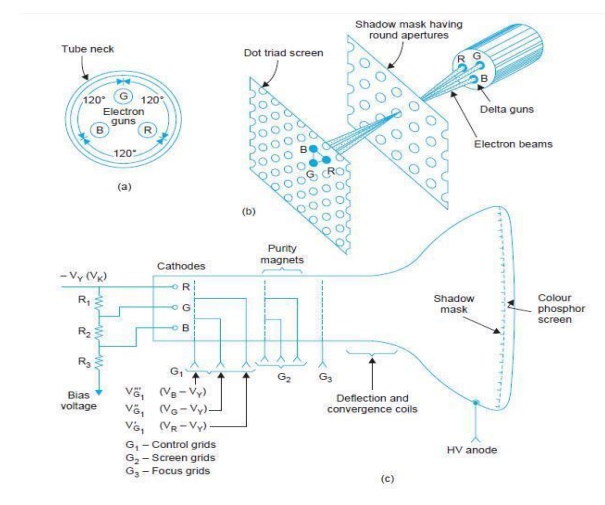 This tube was first developed by the Radio Corporation of America (R.C.A.). It employs three separate guns (see Fig. (a)), one for each phosphor. The guns are equally spaced at 120° interval with respect to each other and tilted inwards in relation to the axis of the tube.

They form an equilateral triangular configuration. As shown in Fig. (b) The tube employs a screen where three color phosphor dots are arranged in groups known as triads. Each phosphor dot corresponds to one of the three primary colors.

The triads are repeated and depending on the size of the picture tube, approximately 1,000,000 such dots forming nearly 333,000 triads are deposited on the glass face plate.

About one cm behind the tube screen (see Figs. (b) And (c)) is located a thin perforated metal sheet known as the shadow mask. The mask has one hole for every phosphor dot triad on the screen. The various holes are so oriented that electrons of the three beams on passing through any one hole will hit only the corresponding color phosphor dots on the screen.

The ratio of electrons passing through the holes to those reaching the shadow mask is only about 20 percent. The remaining 80 percent of the total beam current energy is dissipated as a heat loss in the shadow mask.

Generation of Color Rasters The overall color seen is determined both by the intensity of each beam and the phosphors which are being bombarded. If only one beam is ‘on’ and the remaining two are cut-off, dots of only one color phosphor get excited. Thus the raster will be seen to have only one of the primary colors. Similarly, if one beam is cut-off and the remaining two are kept on, the rasters produced by excitation of the phosphors of two colors will combine to create the impression of a complementary color.

The exact hue will be determined by the relative strengths of the two beams. When all the three guns are active simultaneously, lighter shades are produced on the screen. The is so because red, green and blue combine in some measure to form white, and this combines with whatever colors are present to de-saturate them.

Naturally, intensity of the color produced depends on the intensity of beam currents. Black in a picture is just the absence of excitation when all the three beams are cut-off. If the amplitude of color difference signals drops to zero, the only signal left to control the

three guns would be the Y signal and thus a black and white (monochrome) picture will be produced on the screen. Primary Color Signals.

The demodulators in the receiver recover (B – Y) and (R – Y) video signals. The (G – Y) color video signal is obtained from these two through a suitable matrix. All the three color difference signals are then fed to the three grids of color picture tube (see Fig (c)).

The inverted luminance signal (– Y) is applied at the junction of the three cathodes. The

signal voltages subtract from each other to develop control voltages for the three guns,

In some receiver designs the Y signal is subtracted in the matrix and resulting color voltages are directly applied to the corresponding control grids. The cathode is then returned to a fixed negative voltage.