All light sensations to the eye are divided (provided there is an adequate brightness stimulus on the operative cones) into three main groups.

All light sensations to the eye are divided (provided there is an adequate brightness stimulus on the operative cones) into three main groups. The optic nerve system then integrates the different color impressions in accordance with the curve shown in Fig.to perceive the actual color of the object being seen.

This is known as additive mixing and forms the basis of any color television system. A yellow color, for example, can be distinctly seen by the eye when the red and green groups of the cones are excited at the same time with corresponding intensity ratio.

Similarly and color other than red, green and blue will excite different sets of cones to generate the cumulative sensation of that color.

In subtractive mixing, reflecting properties of pigments are used, which absorb all wavelengths but for their characteristic color wavelengths.

When pigments of two or more colors are mixed, they reflect wavelengths which are common to both. Since the pigments are not quite saturated (pure in color) they reflect a fairly wide band of wavelengths.

This type of mixing takes place in painting and color printing. In additive mixing which forms the basis of color television, light from two or more colors obtained either from independent sources or through filters can create a combined sensation of a different color.

Thus different colors are created by mixing pure colors and not by subtracting parts from white. The additive mixing of three primary colors red, green and blue in adjustable intensities can create most of the colors encountered in everyday life.

The impression of white light can also be created by choosing suitable intensities of these colors. Red, green and blue are called primary colors. These are used as basic colors in television. By pairwise additive mixing of the primary colors the following complementary colors are produced:

Color plate 1 depicts the location of primary and complementary colors on the color circle. If a complementary is added in appropriate proportion to the primary which it itself does not contain, white is produced.

This is illustrated in Fig. where each circle corresponds to one primary color. Color plate

(Research has shown that the actual neural process of color perception is substantially different from the tricolor process. However, all color reproduction processes in television or printing use variations of this process and is found satisfactory). 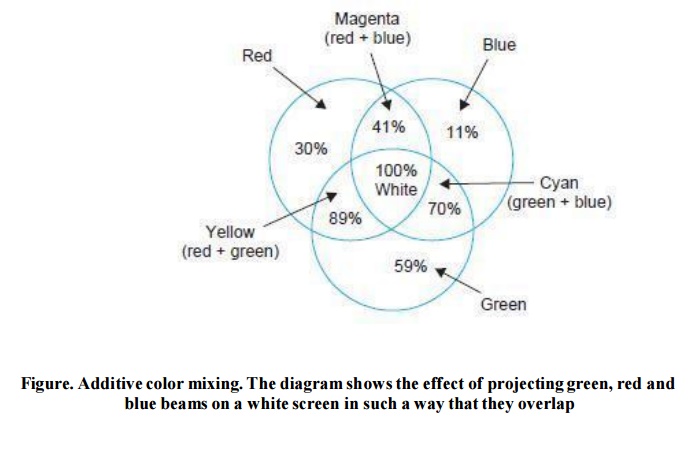 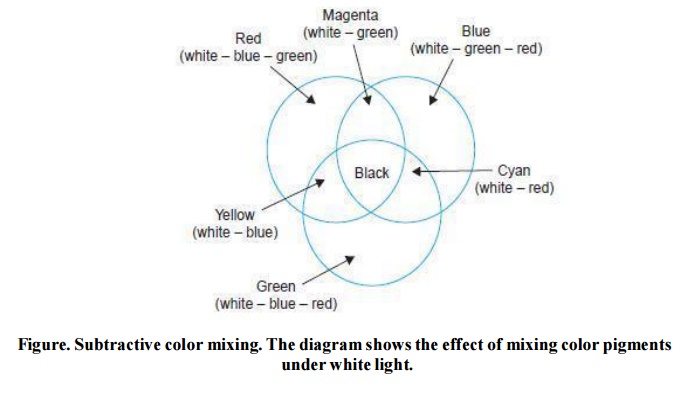