Any color has three characteristics to specify its visual information. These are (i) luminance,(ii) hue or tint, and (iii) saturation.

(i) Luminance or Brightness

This is the amount of light intensity as perceived by the eye regardless of the color. In black and white pictures, better lighted parts have more luminance than the dark areas. Different colors also have shades of luminance in the sense that though equally illuminated appear more or less bright as indicated by the relative brightness response curve of Fig. Thus on a monochrome TV screen, dark red color will appear as black, yellow as white and a light blue color as grey.

This is the predominant spectral color of the received light. Thus the color of any object is distinguished by its hue or tint. The green leaves have green hue and red tomatoes have red hue. Different hues result from different wavelengths of spectral radiation and are perceived as such by the sets of cones in the retina.

This is the spectral purity of the color light. Since single hue colors occur rarely alone, this indicates the amounts of other colors present. Thus saturation may be taken as an indication of how little the color is diluted by white. A fully saturated color has no white. As an example. Vivid green is fully saturated and when diluted by white it becomes light green. The hue and saturation of a color put together is known as chrominance. Note that it does not contain the brightness information. Chrominance is also called chroma.

Chromaticity diagram is a convenient space coordinate representation of all the spectral colors and their mixtures based on the tristimulus values of the primary colors contained by them. Fig. is a two dimensional representation of hue and saturation in the X-Y plane (see color plate 3).

If a three dimensional representation is drawn, the ‘Z’ axis will show relative brightness of the color. As seen in the figure the chromaticity diagram is formed by all the rainbow colors arranged along a horseshoe-shaped triangular curve.

The various saturated pure spectral colors are represented along the perimeter of the curve, the corners representing the three primary colors red, green and blue. As the central area of the triangular curve is approached, the colors become de-saturated representing mixing of colors or a white light.

The white lies on the central point ‘C’ with coordinates x = 0.31 and y = 0.32. Actually there is no specific white light sunlight, skylight, daylight are all forms of white light.

This shade of white which has been chosen to represent white in TV transmission and reception also corresponds to the subjective impression formed in the human eye by seeing a mixture of 30 percent of red color, 59 percent of green color and 11 percent of the blue color at wavelengths specified above.

A practical advantage of the chromaticity diagram is that, it is possible to determine the result of additive mixing of any two or more color lights by simple geometric construction. 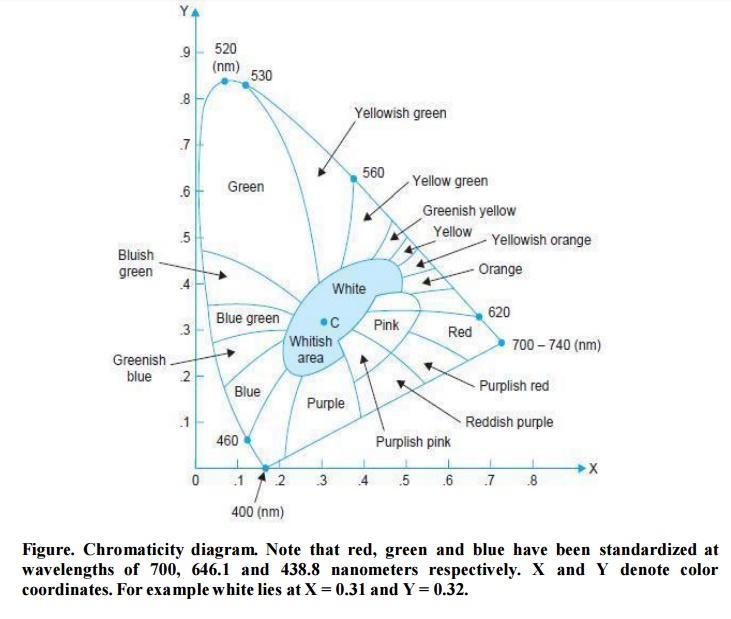 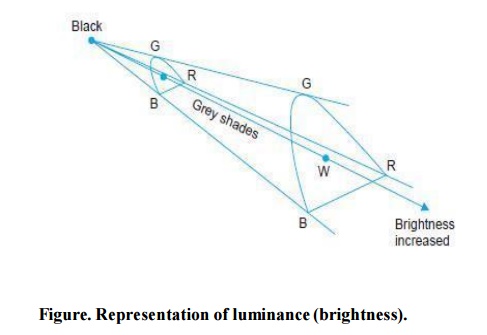