The majority of vitamin disorders encountered in clinical practice are deficiencies. The investigative procedures are varied and depend upon the vitamin in question.

The majority of vitamin disorders encountered in clinical practice are deficiencies. The investigative procedures are varied and depend upon the vitamin in question. Chemical tests can help to confirm the diagnosis of overt vitamin deficiencies and may enable diagnosis to be made at a relatively early stage. The types of tests used include direct measurements of the concentration of the vitamin or one of its metabolites in plasma, serum, erythrocytes, urine or tissue biopsies. The concentration of vitamin in plasma does not necessarily reflect body vitamin status and a measurement of the concentration in blood cells may be a better indicator. Enzyme-based tests are available for some vitamins. Metabolites that accumulate in the blood or urine following the blockage of a metabolic pathway normally catalyzed by an enzyme that requires a vitamin as a cofactor or coenzyme may also be investigated.

Vitamin B1 (thiamin) deficiency can be assessed by direct measurement of its concentration in plasma or indirectly by determining the increase in erythrocyte transketolase activity in the presence of added TPP. The increase in activity is called the activation coefficient. A coefficient less than 15% is considered normal; an increase of 15–25% indicates a marginal deficiency, while an increase greater than 25% with clinical signs is indicative of severe thiamin deficiency. Thiamin deficiency can also be assessed by the clinical response to administered thiamin, that is, an improvement in the condition after administering thiamin supplements. The nutritional status of vitamin B2 (riboflavin) is investigated in a similar manner by determining the activation of glutathione reductase activity of erythrocytes in the presence of added FAD. 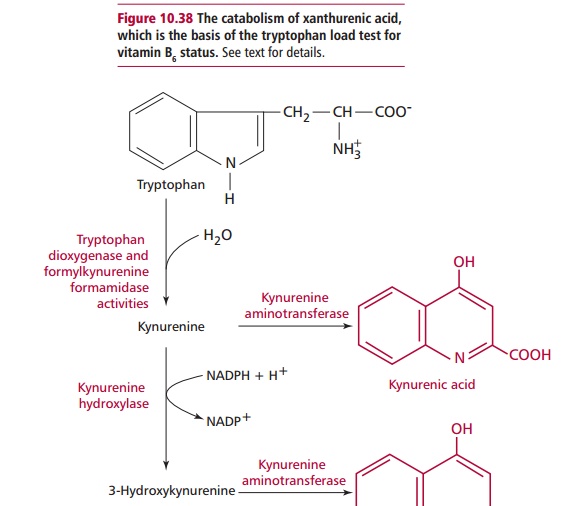 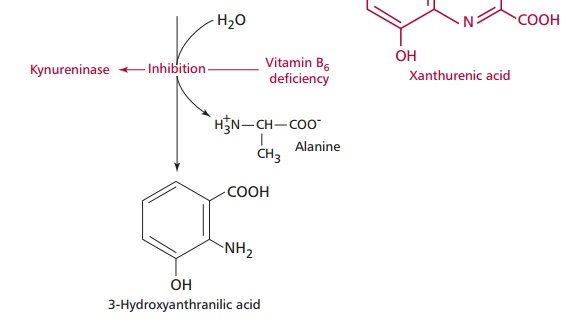 The status of vitamin B6 can be investigated in a manner similar to those for thiamin and riboflavin by determining the activation coefficients of erythrocyte alanine and aspartate transaminase activities (ALT and AST respectively) in the presence of the cofactor pyridoxal phosphate. Alternatively, vitamin B6 status may be assessed by the tryptophan loading test. Tryptophan is normally catabolized by the pathway shown in Figure 10.38. However, the activity of kynureninase decreases markedly in B6 deficient patients. If such a patient is given an oral dose of 50 mg per kilogram body weight of tryptophan, then there is an increase in the amounts of kynurenic and xanthurenic acids formed and these appear in the urine. Generally less than 30 mg of xanthurenic acid is excreted daily; higher amounts are indicative of vitamin B6 deficiency. However, some other disorders of tryptophan catabolism can also lead to an increase in xanthurenic acid production so abnormal results must be treated with caution.

A possible deficiency of vitamin H (biotin) can be investigated by measuring its concentration in whole blood, serum or urine. Determining plasma biotin is not a reliable indicator of status. Changes in urinary excretion of biotin or of its metabolites are better indicators of biotin status.

Folic acid status may be investigated by directly measuring its concentration in serum or erythrocytes although these are associated with a number of problems. Serum folic acid tends to reflect dietary intake over the previous few weeks. Patients with both acquired and inherited folic acid deficiency may remain moderately deficient for months or years, taking in just enough folic acid to prevent low erythrocyte folic acid concentrations and frank anemia. Erythrocyte values are not sensitive to short-term variations; depletion occurs only in the later stages of deficiency and is usually accompanied by megaloblastic anemia. Both erythrocyte and serum folic acid studies must be performed. Severe folic acid deficiency is accompanied by a macrocytic anemia although the size of erythrocytes may be entirely normal in lesser degrees of depletion. Serum vitamin B12 concentrations should also be measured when evaluating folic acid deficiency since if either vitamin is deficient it can lead to a failure in absorption by megaloblastic intestinal cells resulting in a secondary deficiency of the other. Formiminoglutamic acid (FIGLU) is a substrate for the folic acid dependent enzyme, formimino-glutamate formiminotransferase required for histidine catabolism. When the vitamin is deficient, FIGLU accumulates and is excreted into urine providing a sensitive test of deficiency. However, FIGLU also increases in vitamin B12 deficiency and liver disease, so a high FIGLU excretion is not specific for the diagnosis.

A deficiency of vitamin B12 (cobalamin) is investigated by measuring its serum concentration and by hematological examination of blood and bone marrow slides. Serum B12 can be measured in isolation or as part of a Schilling test to exclude intrinsic factor deficiency (pernicious anemia). A Schilling test will assess whether vitamin B12 is being absorbed correctly by the body. The amount of vitamin B12 excreted in urine over a 24 h period is determined after giving the patient a known amount of radioactively labeled vitamin B12. If the GIT is able to absorb vitamin B12 normally, then up to 25% of the vitamin will be present in the urine. If there is failure in absorption, then little or no vitamin B12 is detected in the urine. In the latter case, the test is repeated following an oral dose of intrinsic factor to determine whether the vitamin deficiency is due to lack of intrinsic factor or a GIT problem.

The concentration of vitamin A in the plasma can be measured but this may be misleading as it only declines when tissue stores become severely depleted. Deficiency can also occur in severe protein deficiency which decreases the amount of its carrier protein. In such cases, the concentration of plasma vitamin A would increase once the protein deficiency was corrected. Clinical investigations of possible vitamin D deficiency involve determining serum calcium and phosphate concentrations and measuring serum alkaline phosphatase activity, since the enzyme is lost from cells during bone catabolism. The metabolite, 25-hydroxycholecalciferol in samples of plasma can be measured directly and is a good indicator of vitamin D status in the presence of normal renal function. Vitamin E status can also be assessed by direct measurement of its concentration in the plasma or serum, while vitamin K deficiency is investigated by assessing the prothrombin time of the patient .