Dietary lipids are the fats and oils, both of which contain fatty acids that are concentrated sources of energy.

Dietary lipids are the fats and oils, both of which contain fatty acids that are concentrated sources of energy. Fats are also needed as carriers for the fat-soluble vitamins A, D, E and K. Fatty acids may be saturated or unsaturated, that is, they lack or contain double bonds respectively. The only difference between fats and oils is in their melting points which are related to their degree of unsaturation and chain length: oils are liquid at room temperatures, indicating a higher degree of unsaturation than fats which are solid at these temperatures. Dietary fats (Figure 10.3) consist largely of triacylglycerols together with small amounts of phospholipids and cholesterol. The WHO has recommended that total fats should not supply more than 30% of the energy intake of the diet. 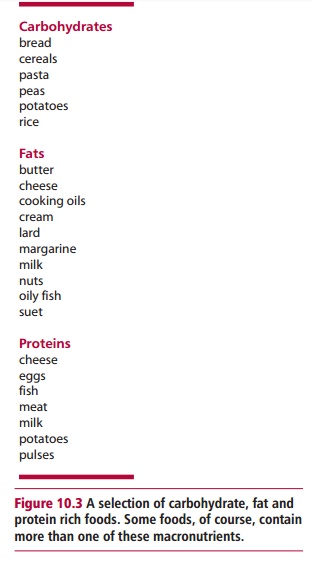 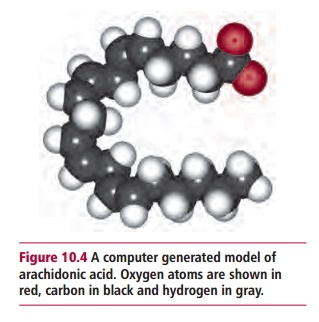 A number of fatty acids cannot be synthesized by the body including linoleic, linolenic and arachidonic acid (Figure 10.4) and are precursors of many biologically active and clinically relevant molecules, such as the eicosanoids (prostaglandins, thromboxanes, prostacyclins and leukotrienes). These molecules act like hormones and mediate a wide range of physiological activities affecting, for example inflammatory responses, blood pressure and clotting, reproductive activities and the sleep–wake cycle. Their actions are local, affecting only cells near their sites of production, and they act at low concentrations via second messengers . 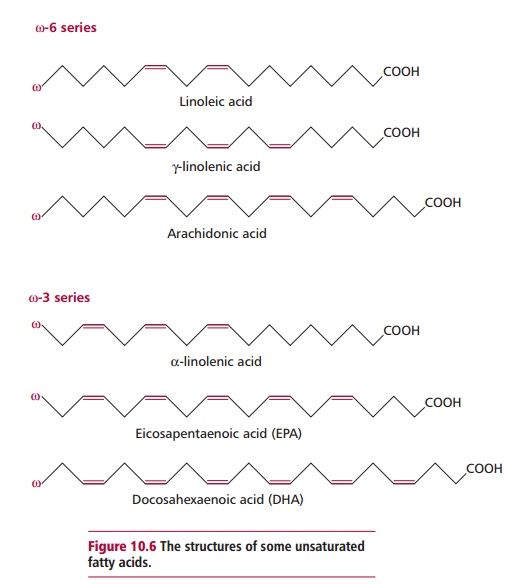 Humans, like all mammals, lack the enzymes needed to form a double bond beyond C-9 or within the terminal seven carbon atoms of a fatty acid (Figure10.5). Rather than the strict chemical convention of numbering carbon atomsin fatty acids from the carboxyl group, the double bonds in fatty acids are often numbered from the terminal or Vcarbon atom, giving rise to three families of fatty acids with their first double bond occurring at positions V-3, V-6 and V-9. These three families cannot be metabolically interconverted. The termomega fatty acid has entered everyday English and the structures of a number of examples are shown in Figure 10.6. Linoleic acid is anV-6 acid. Two forms of linolenic acid occur, a V-3 type called @ linolenic acid (ALA) and the V-6 form, F linolenic acid (GLA). Other V-3 EFAs are eicosapentaenoic acid (EPA) and 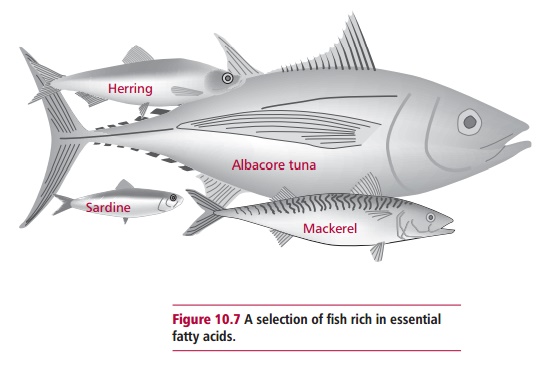 docosahexaenoic acid (DHA). Omega-3 and V-6 fatty acids are EFAs because they are not synthesized by the body but must be obtained in the diet. Seeds and vegetable oils are excellent dietary sources of V-6 EFAs and the body is able to convert linoleic acid to GLA and arachidonic acid. Many vegetable oils contain only low amounts of ALA since this is normally present in the chloroplasts of plants and may only be a significant dietary constituent if green leafy vegetables are consumed. However, ALA can be used to synthesize EPA and DHA by body tissues. Rich sources of the V-3 EFAs, EPA and DHA are in the oils from the muscles and skins of a number of cold deepwater fishes, such as herring, mackerel, salmon, sardines and tuna (Figure 10.7). Cod, which live in similar environments, store fat in the liver: hence cod liver oil is also an excellent source of EPA and DHA.

A dietary deficiency of EFAs leads to a dry scaly skin subject to erythema, poor healing of wounds and hair loss and a failure to thrive in infants. The first associations between V fatty acids and health came from studying Greenland Inuit (Eskimo) and inhabitants of fishing villages in Japan and people of Okinawa. These groups have much lower incidences of diseases, such as coronary heart disease, rheumatoid arthritis  and diabetes mellitus , than their European or USA counterparts, even though their diets are high in fat from eating seal and fish. However, these organisms are rich in V-3 fatty acids that have been shown subsequently to provide significant health benefits. The metabolites of V-3 fatty acids decrease platelet function, reduce the risk from sudden death caused by cardiac arrhythmias and slow the progress of atherosclerosis. Modest decreases in blood pressure also occur with high intakes of V-3 fatty acids. Some studies have indicated that V-3 fatty acids inhibit the synthesis of very low density lipoprotein (VLDL) and triacylglycerols (TAGs) and so decrease their concentration in plasma, particularly in patients suffering from hypertriglyceridemia. Furthermore, they have been associated with reducing morning stiffness and the number of tender joints in patients with rheumatoid arthritis. There is, however, no established recommended daily intake for V-3s although it has been suggested that 1–2% of the total daily energy intake should be in the form of EFAs. Human adults are thought to require up to 10 g of linolenic acid daily.

The eicosanoids formed from V-6 fatty acids, although produced by many of the same enzymes as those from V-3 acids, have different physiological functions and effects. For example, the V-3 group is antithrombic and anti-inflammatory, both processes promoted by V-6 acid derived metabolites. Thus a balancing of the intakes of V-3 and V-6 fatty acids in the diet is thought to be of importance. The diet typical of the developed world is far richer in V-6 than V-3 fatty acids; it has been suggested that ratios ofV-3:V-6 of 2:1 or 1:1 are a healthier balance. The American Heart Associationand the UK Food Standards Agency recommends that people without a history of CHD should consume two servings of fish weekly and those with known CHD should eat one serving of fish daily. More than these amounts are not recommended because, unfortunately, significant amounts of environmental contaminants, such as methylmercury, polychlorinated biphenyls and dioxins, are concentrated in some species of fish. For the same reason, young children and women who may become pregnant, who are pregnant or who are breastfeeding should avoid eating excessive amounts of fish and shellfish. Omega-3 fatty acids exert a dose related effect on bleeding time and it has been suggested that care be applied to their excessive intake, particularly when combined with anticoagulant medications, such as warfarin or heparin . In general, however, their ingestion is well tolerated, although side effects can include a fishy aftertaste and gastrointestinal tract (GIT) disturbances, for example nausea, bloating, belching, all of which appear to be dose dependent.